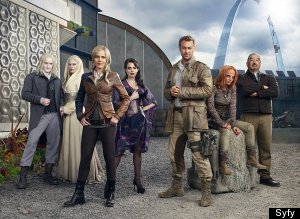 "Defiance" (9 p.m. ET Monday, Syfy) is not just a smart, well-crafted TV show with a good cast and an adventurous flavor, it's also indisputably science fiction, which is a relief.

Too many shows in recent years (on Syfy and other networks) have skirted that label, and that waffling has often resulted in watered-down programs that have pleased neither sci-fi fans nor the mainstream audiences that were presented with genre-lite dramas like "FlashForward," "V" and "Terra Nova." Those shows, and dozens more like them in recent years, ultimately failed to take full advantage of the kinds of the social, cultural and personal stories that can be explored best from the center of the genre. The shows' premises raised sci-fi fans' hopes but then the dramas' indecisive executions dashed them, and though we geeky folk are hardy (we have to be), we do have limits.

"Please, not one more mushy, muddled misfire," I prayed as I slipped the "Defiance" DVD into the player. Judging by the show's first four hours, my prayers have been answered.

The best thing you can say about a speculative world is that you look forward to revisiting it, and I am very intrigued to see where "Defiance" goes. Its first few hours set up plenty of interesting possibilities as it skillfully stakes out a diverting territory somewhere between the grittiness of "Battlestar Galactica" and "The Walking Dead" and the tidiness of "Star Trek: The Next Generation" and "Revolution."

As drifter and former Marine Joshua Nolan, Grant Bowler is perfectly cast as a charming, reckless Han Solo type who can't resist trying to do the right thing, though he has trouble following through on his promises. Stephanie Leonadis is equally well cast as Irisa, his adopted daughter. You'd think it would be difficult to give a guarded, often angry character like Irisa sympathetic touches, but Leonadis makes it look easy. Both actors have just the right kind of charisma for their roles, and if their bond didn't ring true from the start, much of what follows would feel hollow.

As an opening monologue explains, this duo inhabits a world that was terraformed decades ago and thus looks different from our own (aside from the Canadian forests, where television law dictates that 50 percent of all sci-fi battles must take place). "Defiance" begins not long after humans and seven different races, known collectively as the Votans, ended a war that threatened to consume all parties. Most alliances are uneasy at best, and the world appears to have fractured into a series of city-states and fiefdoms. The town of Defiance is built on the ruins of St. Louis (and a video game, which I haven't played, takes place in what used to be San Francisco. You don't need to play the game to enjoy the show, by the way.)

Though the show will need time to fully flesh out the town's many inhabitants, Julie Benz, Graham Greene, Mia Kirshner, Tony Curran and Jaime Murray do solid work as various leading citizens, and right from the get-go, there's a ramshackle reality to the place they call home. The show's not-lavish budget actually works in its favor, and the production designers have been imaginative with the town's aesthetic, which features a lot of shipping containers and a slouchy bar called the Need/Want. Other small touches complete the picture of a scrappy, make-do post-apocalypse: The acerbic town doctor, who is covered in what looks like snakeskin, is a cranky delight; the steampunk-y bikers who occasionally roll into town look just menacing enough; and an underground visit to "Old St. Louis" is suitably surreal.

As I watched the two-hour premiere and subsequent episodes, I flashed on some of my favorite space-related shows (despite the fact that "Defiance" is yet another Earth-bound genre show). There are echoes of the "let's pull together" optimism of various "Star Trek" TV franchises, the complex clash of cultures that lay at the heart of "Babylon 5" and the irreverent, energetic humanism of "Farscape." All those influences make sense, given that "Trek," "Farscape" and "Battlestar" writers are part of the "Defiance" creative team, but what you may not expect is the show's clear debt to Westerns (a prominent element of Joss Whedon's "Firefly," of course).

Consider the bare outlines of "Defiance's" pilot: A stranger rolls into a frontier town, meets the sly, kindly madam at the local saloon and the well-intentioned mayor, and before he knows it, he's embroiled in various efforts to keep the local peace. At no point did anyone in "Defiance" shoot the tavern's piano player, but there are so many Old West signposts at the start of the season that I half expect there to be high-noon showdown on the town's main street before the season ends.

"Defiance," however, is more than just the sum of its influences, and what it does well are things that any good cop, medical or legal show does well: The Syfy drama efficiently lays out the characters' individual and group concerns as it depicts them facing a series of knotty risks and challenges. This show isn't reinventing the wheel, but good character dramas with solid sci-fi credentials are scarcer than they should be, and I can't help but be grateful this show exists at all.

I'm sure message boards will have something to say about the sketchiness of a few of the effects; and the tone of some subplots (especially the one involving Curran and Murray's characters) threatens to veer from drama into campy melodrama at times. The Achilles' heel of many shows, not just sci-fi ones, can often be found among their teenage characters, and a "Romeo and Juliet" subplot is among this show's weaker elements (so far, many younger characters are bland-ish, though that doesn't apply to Irisa). And it's admirable that the show wants to dive right in to Defiance's current problems, but more information about the various Votan races and what happened when they arrived wouldn't go amiss.

Still, the fact that "Defiance's" opening salvos are so entertaining is cause for relief -- and a certain amount of apprehension. Will it continue to embrace the myriad possibilities of straight-up sci-fi, or will it join the ranks of evasive, half-committed, defanged genre programs? In the April 19 episode, an event that takes place within one culture looks a lot like torture to the rest of the town, and there's an interesting ongoing subplot in which the whole future of the town is seriously endangered thanks to one character's definition of the greater good.

Those kind of storylines could take "Defiance" into truly compelling territory, but another episode has the local "lawkeeper" tracking down a murderer. All due respect to Syfy's "Eureka," which had its charms (and its own bemused sheriff), but if it's one thing we don't really need just now, it's a slightly edgier version of that formulaic show.

Science fiction is all about embracing possibilities, not wasting them on retreats into safety. Let's hope this show always embraces the spirit of its title.

Huffington Post's Bryan Cairns visited "Defiance's" set and interviewed the cast and executive producer/showrunner Kevin Murphy, and below are the first 14 minutes of the "Defiance" pilot.