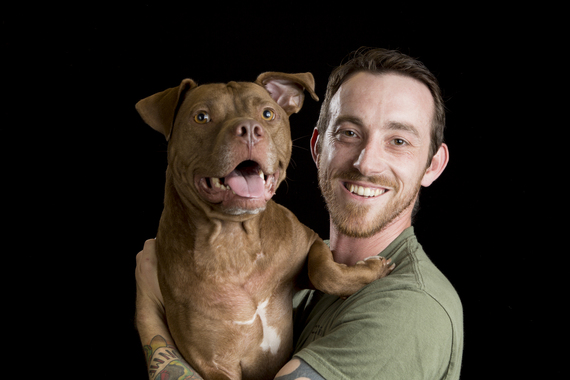 (Chesty and I, one of our first rehab cases in 2013. Shot by a police officer in Dayton, OH as a stray dog, Chesty was kicked in the stomach while taking a nap a few seconds before he was shot and subsequently labeled vicious. Chesty is now Canine Good Citizen Certified. Photograph by Brian Batista Photography.)

I took my first shelter job in 2008, as the Executive Director of a rural Humane Society in Ohio that made the noble claim of "never euthanizing any animal for time or space." I was beyond happy to combine my love for animals, my nonprofit administration experience and my family history of dog training into what I thought was a perfect job.

Despite their exceptional claim, animals that could have been adopted were killed on my watch. I have blood on my hands from my time there, and I simply won't be quiet about it anymore.

For years, I relied on "behavior assessments" made by staff to determine the "adoptability" of our shelter animals, even after I knew how inaccurate these tests ended up being. We took the easy way out, while still making the claim that we adopted out every single adoptable dog we received.

What does adoptable mean though? How is it really defined? 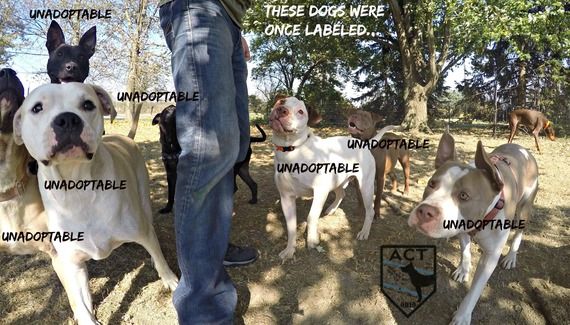 (All of these dogs, housed at the ACT Ohio HQ, were labeled unadoptable for various reasons yet they thrive in a social, natural group setting.)

The fate of millions of dogs across the country is made every day, based on a few subjective tests at a point when a dog's stress level is the absolute highest; as they are picked up frightened and hungry by animal control officers or humane agents and placed into a loud, strange, unfamiliar and otherwise scary environment.

If behavior assessment in shelters, and the impact they make on a dog being adopted, had a human equivalent; imagine if Tinder (and other online dating sites) started including mug shots of people locked up in jail after a night of rowdiness as profile pictures. 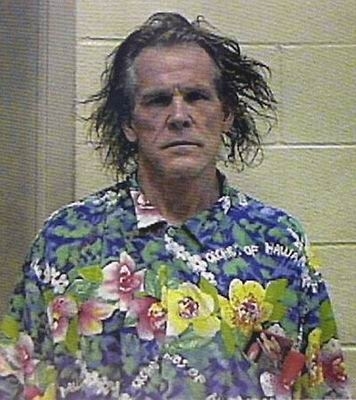 Would you swipe right, or swipe left? Sorry, Nick...

While the behavior assessments that are used at shelters vary widely and many smaller shelters I spoke with admitted to not using any formal tools whatsoever, these are some of the most common tests performed:

2. Touch a dog that doesn't know you, everywhere. See what it does. (Really?)

3. Try to play tag with a dog that doesn't know you by touching their butt and running around. See what it does. (Why? We even teach children to be calm around new dogs.)

4. Pick up a dog's paw pads that doesn't know you. Squeeze them. See what it does. (Even I want to bark at this point. What if the dog has sensitive paws?)

5. Give a dog you don't know (that has missed at the very least a few meals) some food. Then take it away with a fake hand. See what it does. (Come on, now.)

7. Take a dog that doesn't know you, and then throw another dog into the mix. See what happens. (I literally can't even right now.)

Generally, any dog who fails these tests or bites (no matter if the bite was provoked or unprovoked) is automatically deemed unadoptable. Dogs that are noted to have issues, if they aren't automatically euthanized, are rarely if ever worked with or provided any daily enrichment that might mitigate their less desirable behaviors.

Years after leaving the first shelter where I learned all about behavior assessments, I now run my own nonprofit organization. My Agents and I are sworn in as County Humane Agents in my County where we investigate acts of animal cruelty and neglect; we also travel the state under the banner of the Animal Cruelty Task Force of Ohio providing voluntary support services to rural Humane Agents, Humane Societies and private individuals in needs across the state through education, assistance and enforcement.

Finally, we have developed a bit of a niche working with many "unadoptable" dogs on euthanasia lists across the State and we now receive multiple requests every day from shelter volunteers to save dogs that are going to be euthanized. Dogs that are the victims of cruelty and neglect, dog with explainable nipping/biting incidents, high energy dogs that aren't receiving any enrichment in shelter life, hungry dogs that don't like people taking their food away from them mid-meal, recently adopted dogs who were returned after a minor incident that stemmed from doing "too much, too soon" and not allowing proper decompression time for their new dog (See my article on decompression tips for fosters and newly adopted dogs, here), and many more have successfully gone through our rehabilitation program at the ACT Ohio HQ and have been adopted out into loving homes. 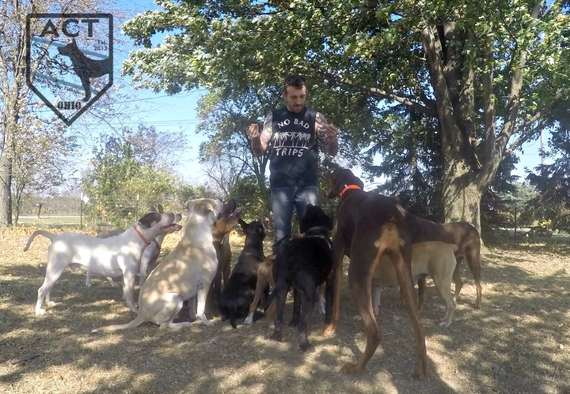 (Undesirable and unadoptable traits can easily develop when a dog is kenneled all day, without enrichment or a chance to be in a social setting. Those same traits quickly dissipate in the right environment.)

The unreliability of behavior assessments has been noted by a lot of people, recently! In 2013 at the Best Friends Animal Conference, it was recently suggested by Austin Pets Alive that shelters and rescues abandon traditional behavior assessments and worked more on providing enrichment in a natural, group play settings that would allow shy and uncertain dogs to blossom and come out of their shells, rather than regress and be euthanized.

The program mentioned, is www.dogsplayingforlife.com and a quick look at their brochure was a complete "duh" moment for me. The activities and structure described mimic what happens with my own rescue, and our focus is on the unadoptable dogs.

And we enjoy a 99% success rate using a very similar way of thinking. Thinking, like a dog.

It's no wonder that Dogs Playing For Life is endorsed by Best Friends Animal Society, HSUS, UC Davis School of Veterinary Medicine and others versus the traditional behavior assessments offered in many shelters.

Shelters, Humane Societies and rescues have an obligation to not knowingly place an unsafe or aggressive dog out into the public. The liability concerns are real, and the need to assess that risk factor is just as real. But we are learning more and more about dogs, and dog behavior every day. Dogs that wind up in a shelter environment are generally not going to act the way they would at home, and the more we learn about dog behavior, particularly in a shelter environment, the more we can work towards a world where no animal is ever needlessly euthanized at that statement actually means something, rather than being a marketing tool for donations and letting subjective and outdated behavior tests do the hard work for us (not to mention increasing the burden on already over burdened private, foster based rescue organizations by labeling dogs "rescue only" when they could easily be adopted out to the public with a bit of enrichment).