Every person has a timeline of their own life, made up of the big moments in it -- the personal bests and worsts that singe their memories. On my timeline, one of those worsts came on November 3, 2004, when my mother was diagnosed with breast cancer. Another happened on March 22, 2006, when it was confirmed that her cancer had metastasized to her bones and it would be incurable.

People often call these "defining moments." But when I think about my mom, when I describe her, these are never the moments that come to mind. She taught me better than that. She taught me that the big moments count, of course; but she also taught me that most of life is what happens in between. So, that's how I think about her timeline -- as memories of the moments in between, because those are what truly define her.

I remember how much fun she was, the amusement she could bring to an otherwise boring occasion. For example, when I was growing up, she was constantly updating her hand-typed songbook. It was an intense piece of work -- put together in alphabetical order in a giant three-ring binder, which had to accompany us on all family road trips. She came up with a competition: my brother, Wade, and my dad would sing one song, and she and I would sing another; we would roll down all the car windows and sing as loud as we could; whoever sang loudest won. The sound our clashing voices produced was pure joy, egged on by the honks and stares from surrounding cars. (And, of course, she always declared our team the victor.)

I remember how superstitious she was about sports. She spent the second half of one home UNC basketball game in the bathroom at the Dean Dome because every time she came out, the Heels would start losing. The night before her lumpectomy in 2005, we sat in a small Boston hotel room, completely distracted by the best rivalry in college basketball -- UNC v. Duke. We superstitiously switched seats back and forth until Carolina started playing well, and when they won, we patted ourselves on the back for the victory.

I remember how well she could laugh at herself. I was at home in Chapel Hill one afternoon in 2009 and found my mom at her computer. She looked worried, so I peeked over her shoulder and saw that she had Googled, "skin cancer." She looked like she had been flipping through the unsightly images for hours, so I asked what was going on. She pointed to a dark spot on her neck and said, "Does this look like skin cancer to you?" I examined it for a minute and said, "Well, I don't know what skin cancer looks like... but I do know what a curling iron burn looks like." She sheepishly turned to me and -- in her best Gilda Radner voice -- said, "Oh. Never mind." We looked at each other for a half second before we both burst into an uncontrollable fit of laughter.

I know these things seem small, but they're not. When you put together the thousands of little stories and the traits they embody, you get a portrait of the woman I most admired in the world. You get my mother.

I was 28 years old when I sat at my mom's bedside for our last big moment together -- the morning of December 7, 2010 -- when she passed. Today, I think of her in all the big moments, like my wedding in 2011 or the launch of the Elizabeth Edwards Foundation last year, whenever I could use some of her wisdom or I need a shot of courage. I wish she were here for those big moments. But I also think about her whenever I sing in the car or I switch seats during a UNC game or I have no choice but to make fun of myself. So mostly, I just wish we had more of the moments in between. 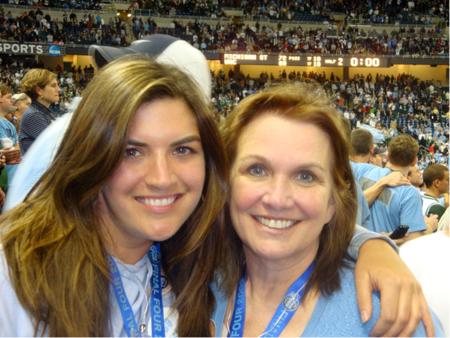