Last week I heard another leader against same-sex marriage use the term "traditional marriage" and refer to "redefining marriage." Thomas Peters of the National Organization for Marriage (NOM) was on NPR arguing with Evan Wolfson of Freedom to Marry. Mr. Peters disagreed with the way Mr. Wolfson was framing the debate as about being for or against gay people. He claims it isn't an even playing field if everything he says is immediately invalid because it is considered to be coming from a place of hate. He says he respects the institution of marriage and believes it worth fighting for and that it should not be redefined. I would like to respond to Mr. Peters in his framework, putting aside any discussion of bigotry. As a woman married to another woman, I have met many other people like Mr. Peters who say they don't hate me as a person; they just believe in preserving the "traditional family."

How these terms are so consistently misused is outrageous and an outrage, so it's time for a history lesson. I care deeply about historical context, and, though I am not a historian, I am launching a mobile app about LGBTQ history this month and have been studying the history of marriage on my own for 10 years. I cannot continue to have this piece inside me and not write and publish it. What I'm going to say has been said before by others, but not nearly enough.

Marriage is a constantly evolving institution. You've probably heard by now how the Bible mentions many forms of marriage. For example, men must marry their brother's widows, women must marry their rapists, and men may take multiple wives at once. The church did not get involved with marriages until after the collapse of the Roman Empire. It took several hundred years after that for marriage to become a sacrament because being single was considered holier than being married. Public weddings didn't come onto the scene until the 16th century. At what point do we start saying the marriage customs of a certain time and place are the "traditional" ones? Are marriages from the year 1000 "traditional"? Or ones from the B.C. years? Or ones from 500 A.D. or 1800 A.D. or 1920 A.D.? They are all different from each other.

My parents are volunteering in a village in Cameroon right now and told me that the men there have multiple wives. One of the men asked my mom if she would be his fourth wife. She joked that he would be her second husband. (My father, her husband of 31 years, was translating this conversation.) The man laughed at such a ridiculous idea because that would not be traditional. This is just one example of how our ideas of "traditional marriage" are simply cultural, not anything officially set in stone worldwide or generation after generation.

Let's look at U.S. law, since Mr. Peters is referring to marriage in this country. In the last 100 years marriage has changed immensely in the U.S., including the legalization of divorce as well as the use of birth control for married couples. We have even changed the gender roles by making women no longer the legal property of their husbands. In the 1800s certain states began to give married women the ability to own property in their own names until all American women were granted that right in 1900. Throughout the 20th century women gained more and more rights, such as being allowed to have credit in their own names, say no to sex with their husbands, and keep their last names if they wished. It wasn't until 1933 that women were granted citizenship separate from their husbands.

We had essentially already made marriage genderless through the elimination of certain rights and responsibilities for husbands versus for wives, but then a new movement started in 1973 as states began passing laws redefining marriage as being between a man and a woman. Since these, there have been yet more laws about this institution that didn't exist before, and I consider them to be against my cultural views that marriage is the union between two consenting adults, a definition that fits most of the iterations of marriage the U.S. has seen. State laws (and the now-invalid 1996 Defense of Marriage Act) that assign further restrictions based on sex don't fit my interpretation of what marriage in the U.S. looks like for my parents' and my generations.

In 1967, the U.S. Supreme Court overturned the laws prohibiting interracial marriage. Does Mr. Peters consider interracial marriages "traditional"? Or does historical marriage only refer to unions from the most recent 46 years? There were interracial couples raising children before 1967 even though their marriages weren't legal, just like there were same-sex couples raising children where their marriages aren't legal. If "traditional" just means "legal," then many heterosexual married couples in recent decades have not been "traditional" by engaging in use of contraception before it was legalized or engaging in sodomy before it was legalized. 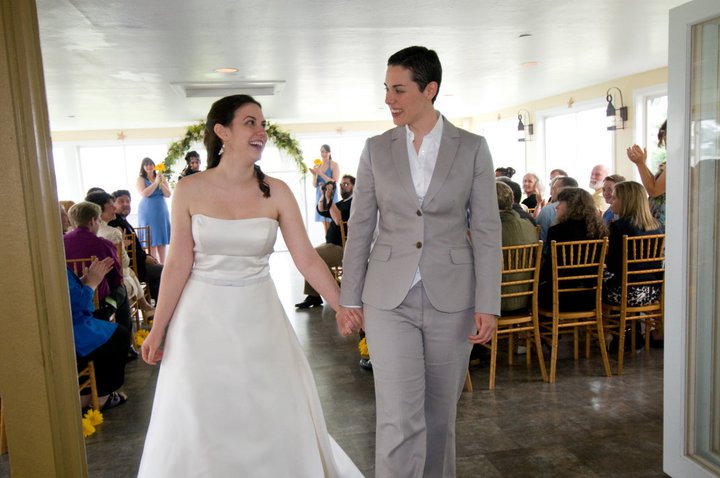 My wife and I, married in Massachusetts two years ago, consider our marriage to be "traditional." We're in our 20s and plan on having kids in a few more years. We had a "traditional" wedding with vows, dancing, family and friends, maids of honor, and a cake cutting. We share financial responsibilities and a home. We try to go out on date nights, but I have my own business, and she is a medical school student, so they're not as often as we'd like. We don't live "traditional," boring lives to conform or to try to act like straight married couples, nor should a couple have to be or act "traditional" to have the right to marry; we're just being ourselves.

I hope I have at least raised the idea that the place of terms "traditional marriage" and "redefinition of marriage" in the same-sex marriage debate should be reconsidered. It personally offends me to hear others talk about "traditional marriage" when they mean to say "monogamous opposite-sex marriage." The kind of marriage that NOM is fighting to protect would be considered a radical redefinition of marriage to anyone from 1920s America. Remember that context when you claim you're defending a time-tested institution.