A 243-page report released Wednesday on the New England Patriots' "deflategate" controversy during the 2015 AFC Championship Game has found that "it is more probable than not that New England Patriots personnel" deliberately deflated footballs below the approved thresholds.

The report adds that it is more likely than not that quarterback Tom Brady was "at least generally aware" of the decision to do so. However, the report says the investigators "do not believe there was any wrongdoing or knowledge of wrongdoing by Patriots ownership, Patriots head coach Bill Belichick or any other Patriots coach in the matters investigated" or "Patriots head equipment manager Dave Schoenfeld."

The report was conducted on behalf of the NFL by an independent law firm. From the report, which is embedded in full at the bottom of this post:

At halftime of the AFC Championship game against the Indianapolis Colts on January 18, 2015, officials measured and found that all 11 of the Patriots game balls were below the minimum 12.5 pounds per square inch pressure level.

On January 23, following the controversy, the NFL announced it had hired Theodore V. Wells, Jr. and the law firm Paul, Weiss, Rifkind, Wharton & Garrison to conduct an independent investigation into the matter.

While the report says the team's personnel tampered with the pressure of their game balls, it added there was "no deliberate attempt" to do the same for a kicking ball during the AFC Championship game.

Perhaps most damning are a series of text messages included in the report between Jim McNally, the officials locker room attendant for the Patriots, and John Jastremski, an equipment assistant for the Patriots, that the pair exchange throughout the season. McNally referred to himself as "the deflator."

(Warning: The exchanges below contain some explicit language.)

From a text exchange on Oct. 17, 2014, following a Patriots-Jets game in which Brady complained about ball inflation: 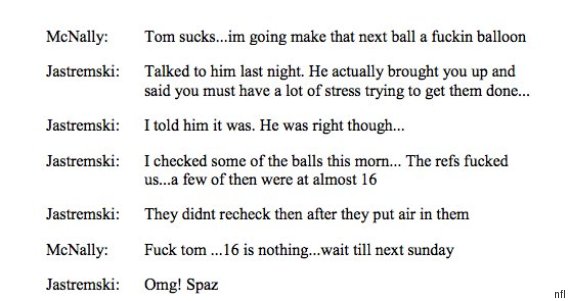 (A needle can be used to deflate footballs.)

The report said that McNally -- without permission -- took the balls from the officials locker room and took them into a bathroom just before entering the field:

Patriots owner Robert Kraft , who was found absent of any wrongdoing, released his own statement in defense of the organization on Wednesday:

When I addressed the media at the Super Bowl on January 26 – over 14 weeks ago – I stated that I unconditionally believed that the New England Patriots had done nothing inappropriate in this process or in violation of the NFL rules and that I was disappointed in the way the league handled the initial investigation. That sentiment has not changed.

“Throughout the process of this nearly four-month investigation, we have cooperated and patiently awaited its outcome. To say we are disappointed in its findings, which do not include any incontrovertible or hard evidence of deliberate deflation of footballs at the AFC Championship game, would be a gross understatement. In addition, given our level of cooperation throughout the process, I was offended by the comments made in the Wells Report in reference to not making an individual available for a follow-up interview. What the report fails to mention is that he had already been interviewed four times and we felt the fifth request for access was excessive for a part-time game day employee who has a full-time job with another employer.

Kraft added that four of the Colts' footballs also measured below required psi levels. He went on to say that the team respects the investigation and will accept the findings and any disciplinary action ordered by the NFL.

"Fighting the league and extending this debate would prove to be futile," he said.

"I want to express my appreciation to Ted Wells and his colleagues for performing a thorough and independent investigation, the findings and conclusions of which are set forth in today’s comprehensive report," NFL commissioner Roger Goodell said in a statement.

"As with other recent matters involving violations of competitive rules, Troy Vincent and his team will consider what steps to take in light of the report, both with respect to possible disciplinary action and to any changes in protocols that are necessary to avoid future incidents of this type," Goodell added. "At the same time, we will continue our efforts vigorously to protect the integrity of the game and promote fair play at all times."