The Federal Reserve is about to announce their decision on when to begin tapering their purchases of securities at next Tuesday's FOMC meeting. Among other issues is whether there is any danger of future inflation from continuing the $85 billion per month in purchases. What inflation, you say? The taper talk is not making many economists happy, because the Fed admits growth is not even up to their previous forecasts and inflation is nowhere to be seen.

"As a central bank, you are lowering your growth forecast, inflation is running low, and hiring is slowing and you are going to taper your asset purchases?" said Julia Coronado, chief economist for North America at BNP Paribas in New York and a former member of the Federal Reserve Board's forecasting staff. "That is a communications challenge." 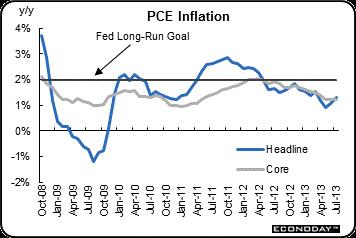 Only an increased demand for goods and services will push up prices longer term, outside of short-term bottle necks in supply chains. So without some inflation, the gap cannot be closed between debt loads and income levels, and the economy cannot grow out of its debt hole.

We have not had an inflationary environment since the 1970s, and that was 'cured' by then Fed Chairman Paul Volcker with his double-digit interest rates that brought down double-digit inflation but caused double-digit unemployment and the 1981, 1983 recessions.

That also brought the era of lower taxation and double-digit federal budget deficits during the 1980s. And the emphasis on holding down inflation-- resulting in 2 decades of low inflation that was called the "Great Moderation"--has meant slower economic growth and less productive investment since then, as well as two further recessions in the last decade, including the Great Recession. 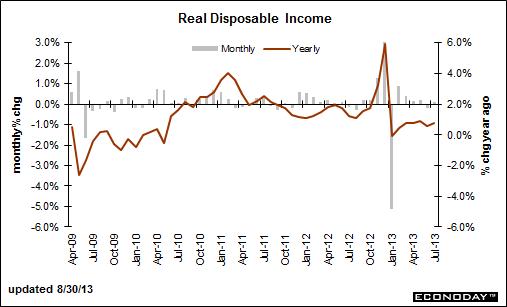 And it has meant less income for the 80 percent of consumers who are wage earners. Real Personal Disposable income growth, particularly since the Great Recession, has been basically non-existent. And that has meant consumers had less money to spend, hence the slow-growth 'new normal' economists have been talking about.

It also means that little progress was seen in PCE inflation getting to the Fed's goal of 2 to 2.5 percent, as we said. Year-on-year, headline prices were up 1.4 percent in July versus 1.3 percent in June. The core held steady at 1.2 percent compared to June.

The result is still-depressed consumer confidence. The latest University of Michigan sentiment survey showed recession-level worries, four years after the end of the Great Recession. Consumer sentiment so far this month has fallen to its lowest level since early in the year, to 76.8 vs. 82.1 for final August and vs. 80.0 at mid-month August.

Such noticeable weakness has to be caused by flat income growth and poor job prospects. Most of the jobs increase has been in the lower-paying retail and health care sectors. 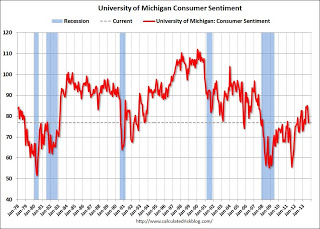 Why such non-existent income growth for Main Street, and why do we need more inflation? The answer has to be that very few are benefitting from this economic recovery with heavy debt loads still holding back both government and consumer spending. The top 10 percent of earners took more than half of the country's total income in 2012, the highest level recorded since the government began collecting the relevant data a century ago, according to an updated study by Saez and Piketty.

"These results suggest the Great Recession has only depressed top income shares temporarily and will not undo any of the dramatic increase in top income shares that has taken place since the 1970s," Mr. Saez, an economist at the University of California, Berkeley, wrote in his analysis of the data.

The income share of the top 1 percent of earners in 2012 returned to the same level as before both the Great Recession and the Great Depression: just above 20 percent, jumping to about 22.5 percent in 2012 from 19.7 percent in 2011, said their study. And that is the real problem. Consumers cannot spend what they cannot earn, so the Fed should stop the taper talk.

Consumers cannot earn more and inflation cannot rise unless some economic policies are reversed, such as the incredibly skewed tax laws. The majority of those wage and salary earners' effective tax rate is something like 30 percent when payroll and income taxes are taken into account. And what was Mitt Romney's? Something like 14 percent for those 2 years he was willing to disclose.