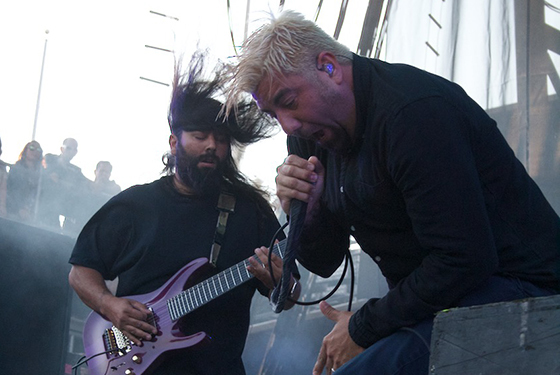 (Deftones' Stephen Carpenter and Chino Moreno at Rock On The Range

The Deftones have been one of those bands that through all sorts of changes in trends in rock music, they always made it through to the other side doing what they wanted to do. As tough as that can be, especially when you are as much of family as these guys are with inner disputes and all, that's the innate dynamic that makes it all feel authentic and has kept their strong fan base around for well over 20 years. Getting passed that next step, those next obstacles, or that next goal was always the foundation for all the Deftones members, ever since their humble Sacramento, California beginnings.

Recently, I was able to chat with Deftones members Frank Delgado (keyboards, samples) and Abe Cunningham (drummer) at the Rock on the Range festival in Columbus, Ohio and chat with them about their new album Gore and their longevity.

What's been the reception thus far for the new album Gore?

Abe Cunningham: It's been good. We've been playing maybe two or three songs so far. We're starting to add things in as we go and we're actually just getting going as well on the tour. Always nice to have new stuff mixing nicely with old stuff, and trying to rock man!

Frank Delgado: Reception has been good. We're having fun with it. It's good times.

Do you feel like, as time goes on, your fans are still passionate about the old material from the first few albums?

Abe: Oh yeah. There's a lot of people that like us for different reasons. When you try to please everyone, you realize that you can't, but you can certainly try. We just try to have fun with it. We try to have a diverse set. We definitely have enough material to be able to choose and make things cool, so in the end, it turns out to be a good time.

How do you keep the passion alive to continue to make music and keep the band together?

Abe: (laughs) I think we really enjoy being around each other and enjoy each other's company. We like going in and taking on challenges and traveling. Just being part of what we've built, it's a good feeling and taking it further. Try to make really good records, honestly, that we're proud of, that will last. That's enough of an inspiration to keep you going for a lifetime.

How do you challenge yourselves musically?

Abe: Being in a band is challenging as it is (laughs). That's the challenge right there. It's all about having fun. It's all about good times. Anything's that been said and it's well documented about tensions in our band, we're not the only one. It's another day at the office for me, it's a part of being in a band. Challenging. It's always a challenge, but it's a damn good time.

Frank: It's a really good time. It all pays off in the end. We get to travel the world together. We get to see beautiful places. Play music for beautiful people. It's a big deal man. You get to a certain age, you appreciate what you got going on.

How does it feel that there is still ways you can succeed to another level as a band after all these years?

Abe: It's pretty unique. We're definitely in a different situation having been around for a while. It's unique and special. It's something that we've worked a long time over to still be around, but it's something you don't take lightly. Like you said, there's definitely a newfound appreciation. It's like anything in life, you get burned, you get tired, you got home and rest. With this, we are able to go home and rest and get fired up to go do it again. What we do is what keeps me going.

Frank: Inspiration. I find it amongst my other four guys and just being around each other and just seeing what we create together. To me, I have lots and lots of influences musically, but I don't bring them to the table per se. I just take things in and hopefully they come back out of me some way. For the most part, that's all of the band really in a roundabout way. I think we find a lot of inspiration just being around each other knowing we're going to tackle the world together.

This may be more directed towards you Abe because you've been in the band longer, but when you look back to those early years of Deftones starting, what are you fondest memories?

Abe: Just doing it. It ties into what he was saying. A goal of ours was, for one, let's start a band! We're 15, let's start a band. Let's play Danzig "Twist Of Cain" because we can all play it together and Chino can sing it. Let's then book a gig and we booked our first gig in a backyard barbeque, then our first club. Then the goal really became, we played in our town a lot, let's try to get to the next town over, and then the next town. Then it became San Francisco, Bay Area, L.A., then it became the next state, then next country. It was still the same mentality. Let's try to see where we can go. I know we like going places.

What did you feel like you had to do to not get stuck in your own locale to be able to break out and go to all of those places?

Abe: For me, it was a collective drive initially, not knowing much, but having a dream. It's not even corny, it's real. Having a collective focused drive to want to be able to get to that next town.

What inspires the band when writing and recording music?

Abe: Sake. Tequila. Weed. (laughs) Nah, those are all little things we play with to maybe change your headspace.

Frank: It's been said a million, but we get together and we see what happens. Eventually, something's going to happen. Sometimes it's not fast. Sometimes it is fast. Sometimes it's grueling and you have to work something out. Eventually, someone will hear something cool and point it out. It could be a really cool riff on the drums, a riff on the guitar, anything. When someone points it out, we just start layering it and try and make it cooler. If we're at it for the whole day in making that one part cool, it's going to probably still around. If it doesn't go anywhere, it will just disappear and go away. That's what it is. You're in a room with guys trying to make something cool. There's no idea. There's no one saying 'Hey, you know this record? Let's try and make a song that sounds like that'. We've never been like that. We are just trying to create some shit and make it sound really cool with our own means.

Are there times where you guys butt heads in the studio? How do you resolve that?

Abe: Maybe even 80% (laughs). Once again, it's just another day at the office and its part of being in a band. Its five guys with five strong personalities. Not everyone is trying to get there shit in! It's not even about that. There's a lot of butting heads and a lot of tension over the years. It's well documented with our band, but that's with any other band too. I'll say this. There is still a unified goal, just like getting to the next town over, of five of us unified enough to want to complete something and make it cool. At least cool to us.

Frank: That's the thing that's been working. We have enough faith in it now that, it's kind of selfish in a way, but as long as it's cool to us, we just hope and think it will be cool for others instead of worrying that it's not good enough. As long we're like this is cool and we like it, that's it.

What goes through your heads when you're on stage?

Frank: There's definitely a transference of energy, which is really cool, especially if they're giving it, we're going to give it right back. I pay attention to him a lot. I always have for some reason. Plus, I'm facing him. I'm always watching Abe for some reason. It used to be to help me keep time, not its just how I do it. I'm kind of in a tunnel usually.

Abe: I got the best seat in the house, you do too. I just sit and look at all kinds of shit. Like oh shit that bird just shit on that poor kid in the audience.

What do you think the musical legacy of the Deftones will be?

Frank: I think we far exceeded it already, honestly. We've gone further than we probably ever thought we would have. We've been everywhere almost. Exceeded a lot of the dreams. Just happy to keep going.