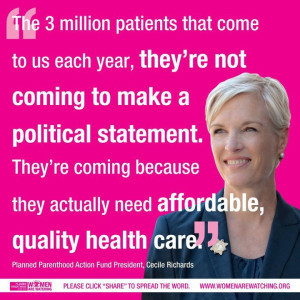 I have been watching the Planned Parenthood defunding issue quite closely. Two nights ago, I found myself unable to sleep, worrying about it. Now, I do have a sort of free-range anxiety thing that happens at night, like the time I spent an hour working out how I would save my daughter if she was being eaten by a boa constrictor. But the reality of defunding Planned Parenthood seems more likely than the boa constrictor thing, and what I realized is that while defunding Planned Parenthood won't make the slightest difference in my everyday life, it could dramatically impact already-marginalized women and negatively affect our economy. Here's why.

If I need to see a doctor, I have an OB/GYN who provides preventative care for my "female issues." I can call her, get an appointment that works with my schedule, drive to her office and be seen. Someone will bill my insurance and I will have a $20 co-pay. If I need medication (ahem... a little something to alleviate menopause?) it will be at a reduced price thanks to my insurance coverage. I have a pap smear every year. I have a mammogram every year. I get to have the secure feeling that I am doing all I can to take care of myself.

For those without a car and/or a flexible schedule, the scene changes.

They need an option that is close to work or home or is easily accessible via public transit. There is a need for evening appointments or weekend ones or even the ability to just walk in. And, according to a 2015 fact sheet from the Guttmacher Institute, 60 percent of women who use clinics like Planned Parenthood need those clinics for care beyond just contraception. And 40 percent of those women don't go anywhere else for healthcare. Like if their throat hurts or they want a flu shot, they still go to Planned Parenthood.

Birth control is good. Birth control is the reason that women can work at the level they do today. It's super hard to be a CEO of a company when you are pregnant every year -- I think even Carly might agree.

An article published in Time Magazine stated, "Births to financially insecure single women who aspire to middle-class life are a hindrance to upward mobility."

Without access to birth control, single women are effectively shut out of the middle class.

But contraception is, in a way, silly to even talk about. I literally don't know anyone who doesn't use some kind of contraception (I am counting abstinence, since I know a few small children.) My doctor has given me all kinds of different contraception over the years and I just got my tubes tied.

Sure, I paid out of pocket for my IUD and for the tubal ligation because they weren't covered. Sure, I wondered why any insurance company would want to risk pregnancy in a 48-year old woman with a history of pregnancies falling out of her in dramatic and expensive ways. But the upshot is, I'm all set. Yay me!

However, if someone needs a publicly-assisted clinic like Planned Parenthood to access birth control, they might not be so lucky. The Guttmacher Institute fact sheet stated:

Of the 38 million women in need of contraceptive care in 2013, 20 million were in need of publicly funded services and supplies because they either had an income below 250% of the federal poverty level or were younger than 20.

A little over half of the women in this country need to go to a clinic receiving public funds to gain access to contraception.

Abstinence? I refuse to even debate abstinence and here's why: Over 82 percent of the women who use federally-funded centers for contraception are adults. According to the Family Planning Annual Report: 2013 National Summary, "In 2013, 51 percent (2.3 million) of family planning users were in their 20s, 31 percent (1.4 million) were 30 or over, and 18 percent (826,829) were 19 or under."

And why should I care, sitting here with my expensively and neatly tied tubes? Without access to birth control, there will be more unwanted pregnancies. According to a 2013 Guttmacher Institute study:

In 2013, publicly funded family planning services helped women prevent two million unintended pregnancies; of those, one million would have resulted in an unplanned birth and 693,000 in an abortion. Without publicly funded family planning services, the U.S. rates of unintended pregnancy, unplanned birth and abortion each would have been 60 percent higher.

3. No last ditch option in case of unwanted pregnancy.

So let's say that my tubes untied themselves and let's say I wasn't happy about the resulting pregnancy. I could go to my doctor and she would ensure I had a safe abortion. Right now, it's still legal. But let's say that someone (*cough* politician! *cough*) decides that it is no longer legal to terminate my pregnancy. I could take our frequent flyer miles and fly somewhere where it was legal. Maybe Canada! I just love the people of Canada.

For the working poor who utilize federally-funded clinics, this is obviously not a possibility. Often, simply traveling 200 miles because a local clinic has been closed is not an option. So they have a baby. A baby that's hard to feed. A baby that makes it hard to work. A baby they might resent every day and can't effectively parent.

Unwanted babies can turn into unwanted children and unhappy people, at risk for all kinds of bad choices. Women who can't work or can't get better jobs need assistance to live. This costs all of us money. Money for prisons to deal with unhappy people making bad choices and money for welfare programs.

But what about adoption, you ask? According to a publication by the U.S. government "Administration for Children and Families," in 2014, there were only about 50,000 public adoptions in the U.S. And there are about 650,000 kids in the foster care system with 100,000 of those waiting to be adopted. By restricting access to abortion to those who are not able or equipped to have a baby, we are looking at a huge incremental load on the foster care system. Which again, costs money.

That's why can't I sleep at night, worrying about Planned Parenthood. Because defunding clinics like Planned Parenthood makes the opportunity to advance economically more difficult and removes the health safety net from the very group of women and children that has no other way to access these things. Taking away essential programs with nothing in the hopper to fill the void makes the future start to look very bleak for the working poor.

So, even though I probably won't use Planned Parenthood, ensuring its services remain available is both economically important and the responsible and caring thing to do. And those reasons should matter to everyone.