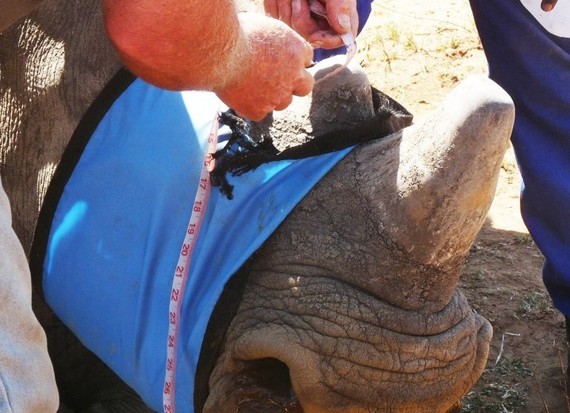 The large bull rhino was about a hundred metres away. The jeep carrying the darting team moved closer, there was a popping sound and the bull twitched and moved off with a dart clearly visible in his upper leg. Within two minutes he was down on his knees. The dehorning team approached quickly, attached blinkers to cover his eyes as a group of ranch hands held him down and attached a rope to his back leg.

Things then happened quickly but with an assured and rapid routine. The vet monitored the rhino's vital signs - it was sedated but not unconscious and not obviously alarmed or in any pain. The dehorners measured and recorded the circumference and height of the horn and calculated how much to remove.

Once the measurements were done, a line was carefully drawn around the large front horns and the smaller rear ones leaving about four or five centimetres below the cut line to ensure growth would continue and there would be no damage to the horn bed where it joins the skull. A battery driven saw was then used to cut through the horn, which took little more than a minute. Someone sprayed cold water on to the horn to prevent over-heating and burn injuries.

Then the horn was off. The team cleaned up the edges of the horn stump and gathered up any shaving or horn dust and sealed them in marked bags. The two horns were measured, weighed and marked with indelible ink. When a rhino is first dehorned DNA samples are taken for future identification.

The main horn from the first rhino I saw dehorned weighed 565g, the smaller horn 67g and the shavings 45g. This would be worth an estimated US$40 000 in Vietnam and China, the main markets for poached ivory horn. That's according to rhino owner John Hume and Kruger Park Chief Ranger Nicholus Funda, who gave me the latest estimates of horn prices. The horns and shavings from dehorned rhino are kept in a bank safe or secure depository.

Dehorning is practised on many South African private reserves and is seen as a way of deterring poachers. It has even been used on some parks and conservancies in Zimbabwe and Namibia, according to a study on the effects of dehorning. Dehorning itself is not hugely controversial - what is, is whether the harvested horn should be sold. This will be debated, with vehement arguments on both sides, at the CITES conference in Johannesburg in September 2016.

A ranch full of rhinos

The dehornings I witnessed took place at a huge rhino ranch at Klerksdorp in South Africa's North West province, belonging to the world's most successful breeder of rhinos, John Hume. His 8,000 hectare property carries 1,405 rhinos, only 17 of which are black rhinos. He has successfully bred 951 rhinos over the last 25 years. South Africa has 18,796 white rhinos and 1,916 black rhinos.

Hume's ranch is not a national park or sanctuary but a massive breeding operation. He, and other private rhino breeders in South Africa, are dehorning their animals to deter poachers.

Dehorning doesn't totally stop poaching as there is still a band of horn left which could be hacked off. But evidence from peer-reviewed studies has shown that dehorning, when widely advertised, does deter poachers. They will seek to find the most lucrative targets according to a study and will generally avoid farms and ranches with dehorning and good security. Even so, Hume has had attempted incursions by poachers.

The horn grows back on the rhinos and Hume dehorns his every 18 months to two years. The same study of dehorning suggests there is no long-term impact of dehorning, as long as all rhinos in an area are dehorned. In the wild, there could be reduced ability of cows to defend calves from predators like hyenas and lions.

But on ranches, there is no obvious change in behaviour or health. When I saw the two dehornings there seemed to be no great trauma involved and the rhino were on their feet and walking away in less than 15 minutes.

The horn is made of keratin, the same substance as hair and fingernails. Rhino horn has been used in Chinese traditional medicine for millennia and now is believed, erroneously, in Vietnam to cure both cancer and hangovers. It is chemically complex, containing large quantities of sulphur-containing amino acids, particularly cysteine, but also tyrosine, histidine, lysine, and arginine, and the salts calcium carbonate and calcium phosphate.

The debate rages on

There is currently a ban on the international trade in rhino horn. As a result the booming demand in China and Vietnam has created a huge and lucrative black market with horn fetching $60,000 a kg.

Hume believes that rhinos in the wild will only be saved through a combination of good security and dehorning, at least on private ranches. A few national parks and reserves want to dehorn and there is a lobby for a regulated and closely monitored legal trade in rhino horn.

This view is strongly opposed by many conservation and animal rights NGOs which means that this approach is unlikely to get sufficient support from governments to end the 39 year old CITES ban on trade.

The issue will be debated at the CITES Conference in Johannesburg at the end of September, when Swaziland applies to be allowed to trade in rhino from legal stocks and natural mortality. But no change is remotely possible at this stage.

Hume and a growing number of rhino breeders and conservationists who support dehorning and controlled trade have a mountain to climb to prove it can be done. What is clear, though, is that dehorning is a useful tool that can reduce the attraction of a rhino to poachers without any ill-effects for the rhino.