A decades-old dinosaur mystery has finally been solved.

Ever since Deinocheirus mirificus was first identified in 1965, paleontologists have been trying to figure out what the animal looked like. Since only the dino's massive forelimbs had been found -- earning the creature the nickname "Terrible Hand" -- no one had a good sense of the animal's overall appearance.

But now, with the help of recently unearthed fossils dating back 70 million years, a research team led by Yuong-Nam Lee, director of the Geological Museum in Daejeon, South Korea, has pieced together a nearly complete Deinocheirus skeleton. 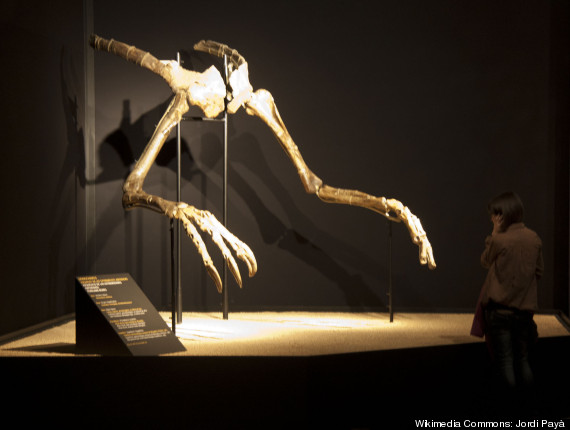 The fossils, which were found in Mongolia, suggest that Deinocheirus was likely a huge toothless omnivore that stood 16 feet tall and measured 36 feet in length with killer claws, a duckbill, and scattered tufts of feathers, the Associated Press reported.

Lee told the AP that "Deinocheirus turned out to be one [of] the weirdest dinosaurs beyond our imagination." Another paleontologist, who was not involved in this new research, seemed to agree with that assessment.

“These new specimens really solve the mystery once and for all,” Dr. Stephen Brusatte, a vertebrate paleontologist at the University of Edinburgh in Scotland, told National Geographic. “They tell us Deinocheirus was much weirder than anyone could have imagined—a colossal, slow-moving, horse-headed, hump-backed dinosaur that looks like something out of a bad sci-fi movie."

To see for yourself, have a look at the University of Alberta's computer animation of the dinosaur in the video above.

This new research was published online in Nature on October 22, 2014.