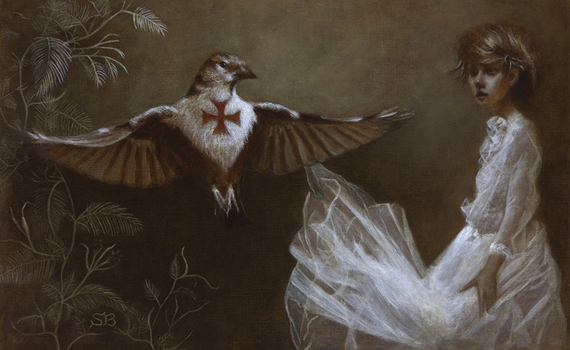 When one thinks about threads within contemporary painting and especially the post-Pop genre of Magic Realism, Leonardo da Vinci doesn't come up all that often -- but then neither does egg tempera, the delicate but rewarding pigment formula da Vinci used to paint the Last Supper mural. Deirdre Sullivan-Beeman is a self-taught artist whose deft combination of both modes of art-making yield mesmerizing results that satisfy the impulses of not only the art-historical technique and the fabulistic narrative, at the same time exploring the complex interplay between rendered space in two and three dimensions. So there is a lot going on at once in her work, but whether you enter it through its aspects of formalism, symbolism, or process, with Sullivan-Beeman, the medium is the message. 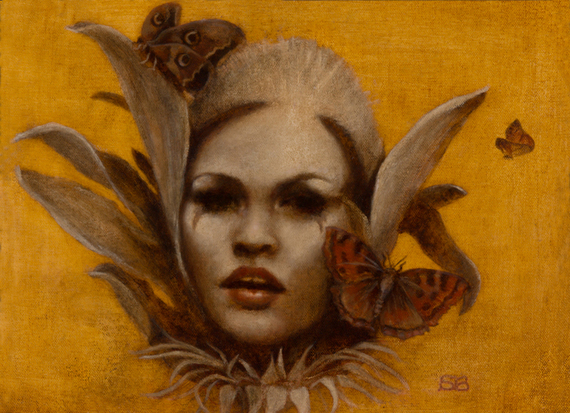 Her website breaks down the formulation of her unique pigment and process in detail (for those who care to try this 14th-century trick at home), but the elaborate underlying tempera grisaille on panel is just the beginning. Again borrowing conventions from centuries of art history, she glazes the piece with up to 40 transparent layers of gossamer-thin oil-based color wash. This amber-like effect traps and refracts ambient light across the surface of the painting, creating subtle but dynamic optical movement with a fairy-tale sensibility. In fact her treatment of surface and background is almost abstractionist in the way she privileges refraction and shading over imagery. But then her figures are rendered with a deliberation that occupies those atmospheres with gravitas and emotion -- so that the mood of the picture matches its visual tone perfectly, even as the more contemporary nature of the imagery tugs against the old-school aesthetic of her style. 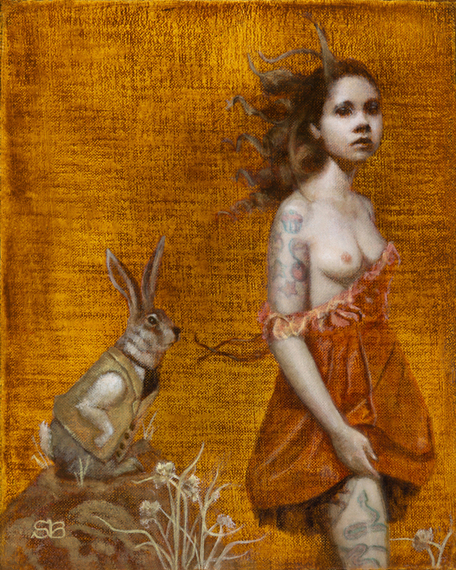 Beyond the allegorical quality of her compositions, the artist also locates meaning in this process itself, embedding a parallel narrative into the technique. The multiple layers are not only physical but metaphorical -- as in layers of meaning. Her decision to take the long way around in how she works in itself speaks to slowness, deliberation, inconvenience as a creative tool; it is almost performative in that it calls attention to the physical craft happening off stage. Furthermore, because her figures are not trapped in this prismatic mica, but rather hover just above it, she's also investigating the optical dynamic of 2D versus 3D space in the language of painting. A painting is "flat" but layers of glaze make it a dimensional object; fully modeled realistic figures read as dimensional within constructed pictorial space, which itself remains flat. Her choice of mostly solo, mostly female figures with the occasional mythological companion also telegraphs the presence of allegory and provides a perfect vessel in synergy with her technique; it's just modern enough that you recognize the present world but just Romantic enough to evoke the world of past centuries to which her studio technique and technology hearken. 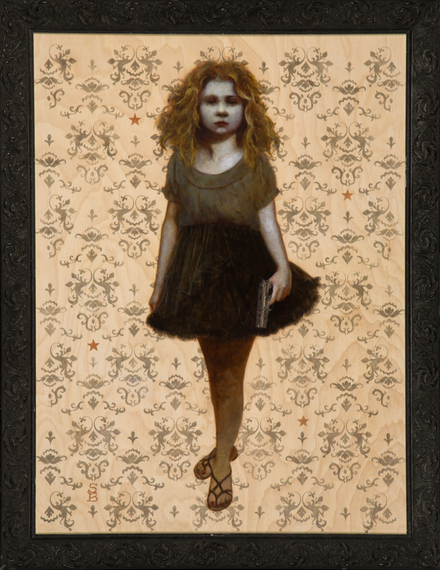 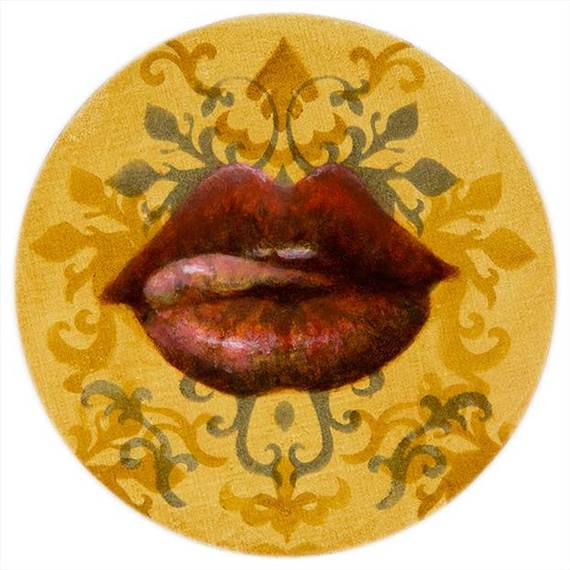