For many girls around the world, adolescence is when they begin their journey of independence and self discovery.

Here in rural West Bengal, India, a girl begins an entirely different journey in adolescence. This is when plans for her marriage begin.

Poverty forces hundreds of thousands of girls in West Bengal to drop out of school. And poverty means many girls are born underweight, remain underweight or are undernourished their entire lives.

Perception means girls are seen as burdens to their families. They are another mouth to feed, and parents must pay a dowry to marry them off. Because dowry can be reduced or avoided if girls are young enough, poor parents often respond by trying to limit the damage. For some, this means marrying at 12 or 14. The majority of girls are married by the time they turn 18.

This is not just a problem for the individual girls. It is a stumbling block for India's development. 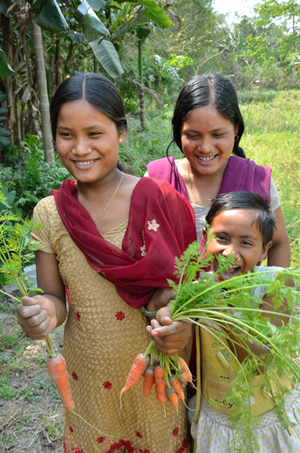 Studies have found that each extra year of primary school boosts a girl's future earnings by 10 to 20 percent, and that girls who finish school have fewer children and children who are healthier and better educated. Research has also shown a link between educating girls and an increase in a country's GDP.

We learned this last year, as we launched an ambitious pilot project involving 7,800 girls across 300 communities. The premise is simple: When girls have access to their parents' land (even if its very modest) and the skills to use that land, they can contribute to their families and communities. They can gain some control over resources and their lives. And they can stay in school and avoid early marriage and the risk of trafficking that sometimes comes with early marriage.

Mindsets may be one of the most difficult things to transform anywhere. But changes are happening family by family. The girls' new knowledge and skills (in "girls groups" they learned how to cultivate a nutritious kitchen garden, make fertilizer and sell their crops) have enabled them to improve their families' diets and to earn money, often for the first time. Families are beginning to see their girls as assets rather than burdens.

We've seen a significant impact on age of marriage, schooling and nutrition.

Patches of land the size of a parking space are making the difference.

Consider the stories of Rakhi and Mamata. Rakhi, who has dreams of becoming a school teacher, was a good student but left school at 15 because her family could not afford both schooling and basic expenses. "I felt that the key to unlock the door of a better future where my dreams could be fulfilled was lost," she said.

Later, Rakhi joined a "girls group" and began participating in training sessions on land-based livelihoods, marketing, business skills and more. She began growing a kitchen garden on a small patch of land, which added vegetables to her family's diet and helped save money that would otherwise have been used to purchase food. Soon she began selling to local shops. She proved that her education would no longer burden her family and got herself readmitted to school, a day that she marks as one of the most important of her life. She told us, "I am in school again and I am confident that I can fulfill my dream of becoming a school teacher."

Like Rakhi, Mamata had to drop out of school because her family could not afford it. Only 12, her parents began preparing for her marriage. "I couldn't oppose my parents decision... I couldn't even request that they delay my marriage so I could finish my education," Mamata told us.

But then Mamata joined her village's "girls group" and learned how to grow vegetables and sell them at market. With each sack of squash, mushrooms, radishes and chilies, her parents' interest in marrying her off has dwindled. This is good for Mamata, her village and her country.

Certainly, Rakhi's and Mamata's problems are far from solved. But their vulnerability has been dramatically reduced.

This year, the Girls Project will reach 35,000 more girls. And there is significant potential to expand the project further to reach millions of girls in villages across West Bengal and help them on their journey to gain control over their lives, obtain an education and the chance to decide who they will become.

Melany Grout is an attorney and land tenure specialist at Landesa.