Can you really be sure a photo you delete from your iPhone is gone? Unfortunately, it's nearly impossible to know. But there are precautions you can take to protect an embarrassing photo from being seen.

Security experts told The Huffington Post that pressing "delete" doesn't always erase a photo completely or immediately. Deleting simply tells your iPhone or Apple's cloud servers to hide that file until it eventually gets overwritten by other data.

You can't see the deleted photos still on your iPhone. "But if I was able to scan the phone, I may still be able to find that data," Zulfikar Ramzan, chief technical officer for cloud security startup Elastica, told HuffPost.

It's also difficult to determine precisely when a photo is wiped from iCloud. Not knowing exactly how Apple treats its servers is part of the challenge, explained Marc Maiffret, chief technical officer for BeyondTrust, a cybersecurity firm.

If you really regret a certain photo, here's how to try to get rid of it.

Erase from the "Photos" tab in your Photos app. Not "Albums." 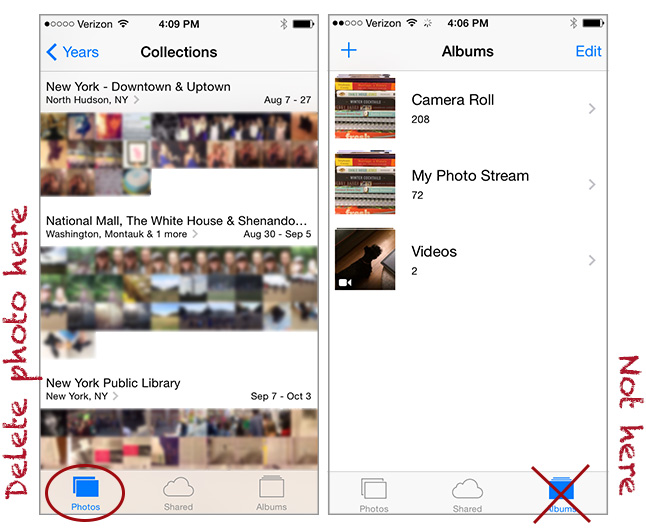 With iOS 7, phone users often make the mistake of deleting a photo from one of two albums: Photo Stream or Camera Roll. But these two are actually separate. (Things are a bit different in iOS 8. Read on if you've already updated.) Camera Roll houses only the pictures you've taken with your device. Photo Stream makes your last 1,000 photos available on all of your devices that have Photo Stream turned on. Photo Stream only is updated (read: only removes photos) when each device is connected to WiFi.

Deleting a photo from your Camera Roll does not delete it from your Photo Stream, and vice versa. You have to delete it in both places, unless you simply head to the Photo tab. Deleting an image from the Photo tab removes it everywhere under the Albums tab.

In iOS 8, delete your photo from the "Recently Deleted" album, too. 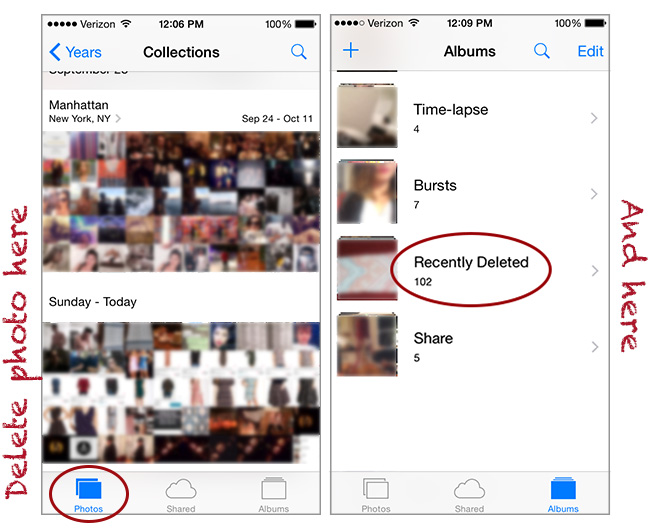 The Photos app in iOS 8 looks a bit different than it did in earlier iOS versions. Photo Stream doesn't show up as an album anymore. But make no mistake. It's still a thing. And due to mass outrage, the newest update (iOS 8.1) has restored the Camera Roll album.

As in iOS 7, you can't just delete a picture from an iOS8 album and see it disappear everywhere. You have to delete it under the Photos tab. Annoyingly, that sends it to the Recently Deleted album (under the Albums tab). If you do nothing, it will hang out there for 30 days before disappearing. So if you want it gone now, delete it from Recently Deleted, too.

Delete from any shared photo streams.

Deleting from the Photos tab still leaves pictures in shared albums. If you shared your dreaded photo with someone under the Shared tab, you'll need to get rid of it there, too. Those images are stored in the cloud for easy viewing by friends and family, and they're not subject to the 1,000-image limit on your personal Photo Stream. Up to 5,000 images will chill out in the Shared tab until you remove them.

If the photo may be part of a backup, delete the backup. 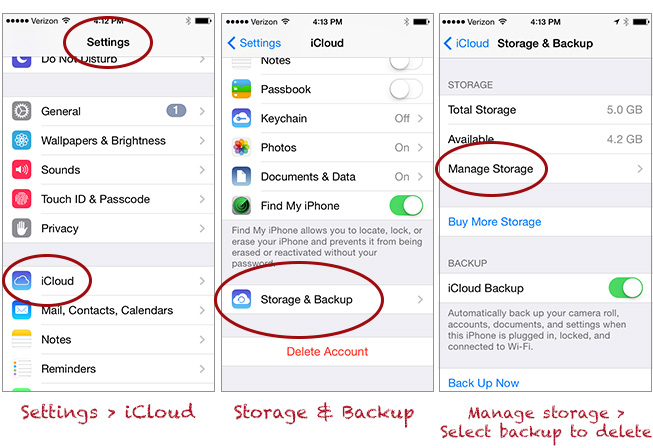 Your device backs up its data to the cloud when it's connected to both WiFi and a power cable. Unless you specify otherwise, that includes your entire Camera Roll. It's like a mini-time capsule. In short, a photo you took a month ago and just got around to deleting may still be in the cloud if your phone backed up in between. (Celebrities' backups saved to iCloud servers likely gave hackers access to the personal photos leaked in September.)

So, to delete a backup, go to Settings > iCloud > Storage & Backup > Manage Storage, then select your device and the backups you'd like to remove. (These steps look slightly different from the image above on iOS 8.) You also can prevent photos from being included in future backups by toggling Camera Roll off.

If you want, don't send your photos to the cloud at all. 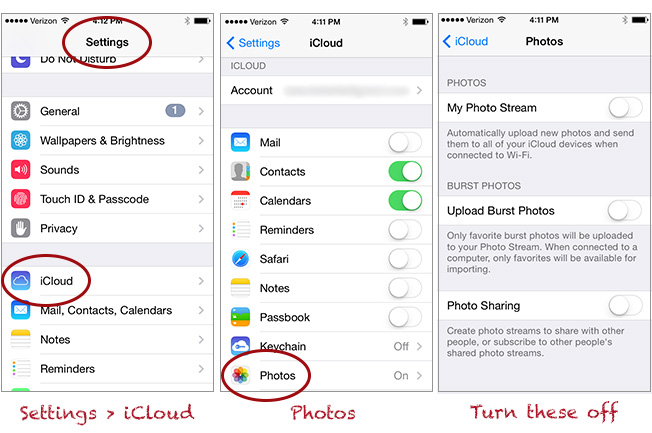 iCloud can be a great resource, but as a photo-sharing medium, it's not absolutely necessary. To turn off iCloud sync for your photos, just go to Settings, scroll down to Photos & Camera, and toggle off all cloud services.

But doing this now only affects photos you take in the future. Make sure you delete whatever photo you'd like to disappear before disabling the cloud service.

Add another layer of security by turning on two-step verification.

"We all decide to react to security instead of doing it ahead of time," Chester Wisniewski, senior security adviser at cybersecurity firm Sophos, told HuffPost. He recommended security features like Apple's two-step verification to help protect yourself.

When activated, Apple will send a numerical code to your phone whenever you (or someone else) tries to log into your iCloud account, so anyone without your phone can't hack in. Start by going to the Apple ID site here. After you sign in, click "Password and Security" on the left side. Apple will then walk you through a series of security questions to enable the higher-level verification. It may not be perfect, but it can't hurt.