On as recent trip to Little Rock, Arkansas, Crystal Bridges' curator Chad Alligood met Delita Martin, a young artist who captures and re-thinks images of African-American women in her work. Little Rock's complex and sometimes violent racial history, including the rocky desegregation of the city's schools under armed guard in 1957, serves as a poignant backdrop. 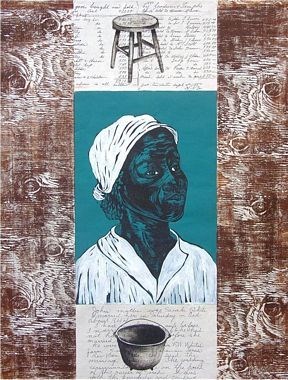 Martin's sharp relief prints bring together history, memory and imagination to create images of African-American women that serve as icons of strength and community. Combining strong line with traditional symbols of domestic service, Martin's prints help to reframe our associations of these things with the women she portrays.

I wanted to take my work and reconstruct the identity of black women. You look historically... when you think about Mammy, Jezebel and Sapphire and all those stereotypes, it wasn't a very positive outlook. Well, I wanted to take these images of women and present them in a different way. 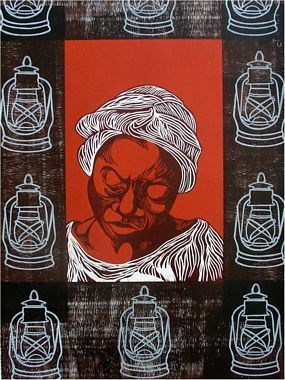 Working frequently from photographs of women in her family, Martin studies the faces and demeanors of her subjects in a process she refers to in terms of conversation: a dialogue with the image that helps guide her toward the embellishment that results in the final print. The elements she adds -- including such household domestic objects as skillets, mason jars and spoons -- comprise a personal iconography for Martin, which she uses to expand upon the portrait, providing context and tone. The finished work elevates both these humble objects and the portrait's subject above the literal, offering a greater understanding of and appreciation for the role of black women in African American culture and American history at large.

I have a lot of photographs of my mother as a child growing up. I think I have more understanding of her from drawing her than I have in conversations that we've had in the last few years. And through understanding her, I've come to understand me. A lot of things are so much clearer to me.

View a short video clip of Delita Martin in her studio as she talks about her work with Don and Chad:

Crystal Bridges Museum of American Art President Don Bacigalupi and curator Chad Alligood have been traveling the country for more than six months, visiting the studios of more than 700 artists in preparation for a major exhibition of contemporary American art titled State of the Art: Discovering American Art Now, to open at Crystal Bridges in September, 2014. The exhibition will showcase the work of more than 100 artists from every region of the United States and will offer an unusually diverse and nuanced look at today's American culture.