Dear Pope Benedict, Archbishop Mahony and all other members of the hierarchy of the Roman Catholic Church,

Last Wednesday, a Dutch television station broadcast Deliver Us From Evil, my 2006 documentary about the sex abuse scandal in the Catholic Church. A few days earlier, the subject of my film, notorious pedophile Oliver O'Grady, was contacted by Dutch police officers, tipped off by his neighbors who had seen an advertisement for the film. Over the course of his 30-year career as a Catholic priest in California, O'Grady abused hundreds of children and is now living on the lam in Europe. O'Grady quickly disguised himself and fled, taking a train from Rotterdam to Schtipol. He managed to catch the last plane out of Amsterdam on Aer Lingus at 20:45. Ironically, had the film aired a few days later, he likely would have been stuck in Holland due to the volcanic eruption the following day.

As you might imagine, after the film aired in Holland, residents of O'Grady's community in Rotterdam were outraged and contacted me and two of the advocates featured in the film, attorneys John Manly and Jeff Anderson. After I spoke to one Rotterdam family, I discovered to my dismay that O'Grady had been masquerading himself as "Brother Francis" and had been volunteering at their local parish. This is alarming on several levels, especially in light of the Church's recent commitment to screen all volunteers and laypeople working in the church in order to protect the children and the community. Needless to say, the community was terrified and is still in a state of panic and shock. Another family told me they had been very close friends with O'Grady and had even traveled with him along with their nine-month-old child.

John Manly and I then called the Irish Guarda, an investigatory unit in Ireland who confirmed that O'Grady was on a "watch list," which means he is a person they know about but is not monitored. They do not follow him or make him register on a regular basis, or take any measures to make sure he is not around children. They do nothing to protect the communities where he lives or visits. Whether or not they reported his history to the police in Rotterdam, or even knew he was living in Holland, is questionable at best. Whatever arrangements were made between the Church and the Guarda are similarly suspect. O'Grady was deported in 2003 from the US after serving several years in prison. Had he been kept here, at least he would have been on a sex offender registry so people would know to avoid him.

So since it seemed like nothing was going to be done, I called my two good friends in Dublin: Noel Donnellon and Daniel Holfeld. They are both respected artists and filmmakers in Ireland. Within two days (after a visiting his old haunts) they provided me with six photos of a bearded Oliver walking freely without a care in the world. He was perusing book stores, cafés, and living the life of Riley. For proof of his whereabouts, please see the photos below. 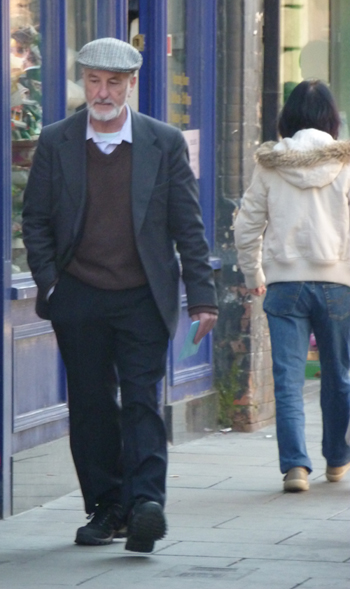 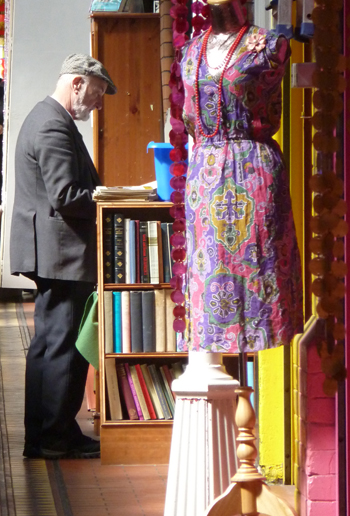 Pope Benedict and Cardinal Mahony, you should thank my friends and be ashamed of yourselves! As spiritual leaders you both knew what was happening, yet you continued to authorize him being moved from parish to parish while he committed unconscionable crime after crime. Why did you keep moving him around? Was it because your careers were blossoming and sick criminals like O'Grady could have discredited you for breaking the law and harboring a pedophile? Perhaps I shouldn't refer to this behavior in the past tense, as it appears that cover-ups like this are still actively going on. I find it interesting that you both have attained positions of great power within the church while you share a history of hiding information so crucial to the safety of children and their communities.

I ask you, Pope Benedict, how can a self-confessed, convicted pedophile continue to work with children in the church? I beg you to look at the full history of this man (it is detailed in my film) and take him away from places where he can harm even more children. I know you are already somewhat familiar with his story and his record, as you presided over the Congregation For the Doctrine of the Faith for 25 years. That organization, designed to oversee morality in the church, was the group that was supposed to review police reports, parental pleas, and other legal documents pertaining to all accusations of sexual abuse. Despite the fact that O'Grady first confessed to abusing a child in the 1970's, he wasn't convicted until 1986. You chose to look the other way. The Church didn't even laicize him until almost 30 years later! You probably wish now that you had done something back then. Maybe if you took action as these cases were coming in, you could have cleaned the entire church up and become a hero for uncovering (as opposed to covering up) these incidents.

Those bad choices from the past 30 years are really starting to backfire. Today, even your loyal followers are starting to believe what victims and their advocates have been screaming about for decades. The lies, deceit and cover-up have caused a systemic breakdown. And I was really surprised a couple weeks ago as I listened to Cardinal Tarcisio Bertone, the Vatican's Secretary of State, say that it was a homosexual issue. We all know that there are no known studies linking pedophilia to homosexuality.

The good news? There is something you can do. Oliver O'Grady is set to turn 65 on June 5 of this year. He is due to receive a hefty annuity in exchange for his settlement in court. Why don't you take that money and give it to his victims or to a social program unrelated to the Church to counsel victims that are desperately in need of help? And you can put him away in a place where won't be able to harm children anymore. That is the challenge I put forth to you today.

And then, I hate to say it, but Pope Benedict, you should step down and face the charges in front of you. You have had a really good run, power-wise, but institutional power corrupts. Look at what happened to Ken Lay and Bernie Madoff.

Archbishop Mahony, your fate is another story. You really should be locked up behind bars. The only reason you are not incarcerated is because the justice department and district attorneys here in Los Angeles have been protecting you for years. How can you walk free after breaking laws, harboring pedophiles, and paying victims off in excess of $700 million--the largest settlement in history? Not to mention bribing people behind closed doors. Not only were you breaking the law, but isn't that stealing from your own parishioners?

It seems that the Church has begun to speak publicly and acknowledge the problem. I hope you both do the right thing, take negligent and corrupt priests and Church officials--including yourselves--out of power, hold them accountable for both their actions and inactions, and face the charges in front of you.