When you think of Ancient Greek sites, for sure you will have heard of the Acropolis in Athens, you may have heard of the Oracle of Delphi - Sanctuary to the God Apollo. You might have even heard of Meteora; a UNESCO World Heritage site with gigantic rock pinnacles, atop which site magnificentally designed and precariously balanced monasteries. But have you heard of the World Heritage island of Delos, a sacred island sitting, ironically, just a 40 min boat ride from the hedonistic island of Mykonos?

Delos - Birthplace of Artemis and Apollo

Fans of Greek Mythology will be aware that the Gods were a frivolous lot. And no exception for the head of the Gods - Zeus. Married to Hera, he had an affair with Leto and when Hera found out, in a jealous rage banished Hera from earth. Where could this poor pregnant soul go? Poseidon, God of the Seas, took pity on her and provided the island of Delos as a sanctuary and safe haven for her to give birth to her twins: Apollo (God of the Sun) and Artemis (the Huntress). 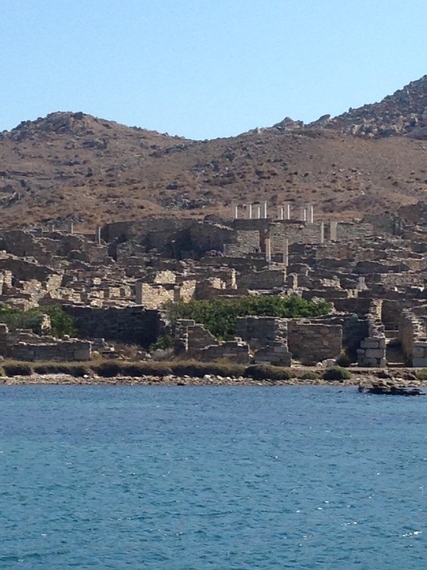 The approach to Delos by boat © Rebecca Hall

As you approach Delos, only 2 miles away from the partying of Mykonos, it's like entering a different universe. The impressive ruins of the temples and sanctuaries dedicated to various Gods still stand. Interspersed within these you'll see slightly more modern houses. But don't get too excited; it's not possible to stay the night on Delos unless you're one of the state employed Guards (who guard against exactly that; people illegally trying to set up camp or steal artefacts) or an archeologist. 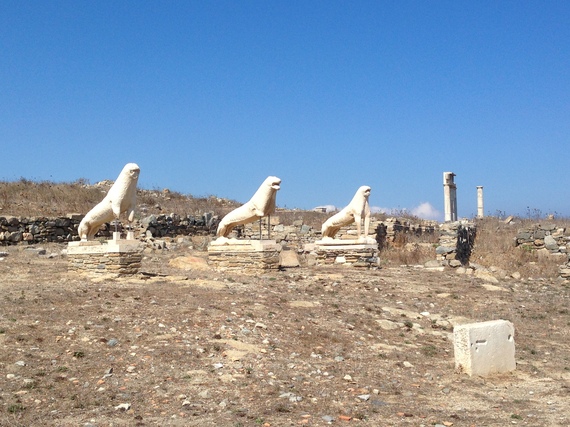 Avenue of the Lions © Rebecca Hall

The Avenue of the Lions is one of the most famous places of the island. Nine lions made of marble from Naxos island guarded the Sacred Lake - drained in 1926 but where the swans and geese of Delos used to live. Now you can see a lone palm tree in the centre, planted there to honour Leto as she is said to have clutched one similar as she gave birth to her twins.
The Lions on display now are replicas, some of the originals still in tact in the Archeological Museum on the island. 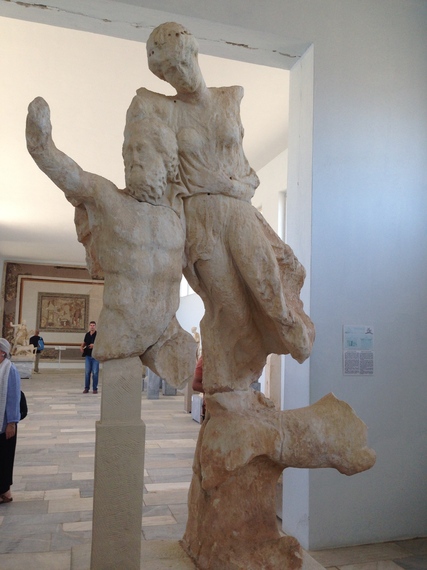 A small cafe is also on site, but it's recommended to bring your own water and a packed lunch when you visit Delos as the prices are extortionate! (Supplies have to be shipped in, that's why).
Entry to the museum, at the time of writing, is €5.

All in all, if you're a fan of Mythology - even if you're not - Delos is a world away from Mykonos and a welcome respite. Do go and visit, and feel ancient history and the wonders of nature wash over you.