Delta Airlines is investigating how a link to a lewd article got posted on its official Facebook page.

The post, linking to a story about oral sex, appeared on Delta's fan page Tuesday afternoon. Delta removed the post -- a screenshot of which can be seen below (it's safe for work, if gross) -- and apologized on Twitter:

The @Delta Facebook page was compromised. We sincerely apologize for the unauthorized, objectionable content that was posted.

“We’re looking into it,” Lindsay McDuff, a Delta spokeswoman, told The Huffington Post. She declined to comment on why the post was left up for an hour before being deleted.

Here's the screenshot. The image is jarring, but ultimately innocent: It is of a species of marine worm, called gaebul, commonly eaten in South Korea. It is sometimes called “fat innkeeper worm” or “penis fish." 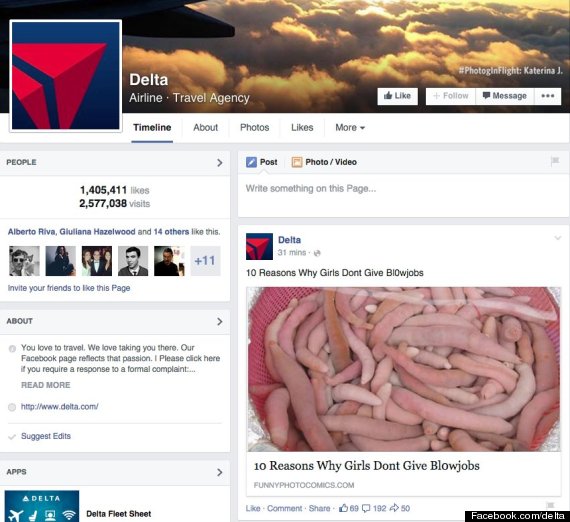 A similar hack affected art-supply giant Crayola last month, when a post with a similar headline and photo appeared on its page, alongside posts sexually degrading and objectifying women. The company apologized soon after, blaming unidentified hackers for breaking into the page and posting the links.

The Delta post marks the second time in the past year that explicit content has been posted on an airline's official social media account. Last April, U.S. Airways tweeted a graphic image of a woman, her legs spread wide open, inserting a toy airline into her vagina. A spokesman said later that a social media manager accidentally posted the image while attempting to flag it as inappropriate. Instead, the photo went out to the airline's hundreds of thousands of followers.