Grossman is the curator of "Language of the Birds," an exhibition now on view at New York University's 80WSE Gallery. The exhibition's title alludes to the mystical belief in a perfect, divine language, devised entirely of symbols, through which the initiated can communicate to reveal secrets and ignite metamorphosis.

"We use [occult] to reference revealing things that were hitherto unrevealed," Grossman added. "More specifically, in the context of the show, it really is about magic, using ideas of symbolism and ritual and intention to create actual change in the material world."

"Language of the Birds" features artists historical and contemporary, whose work converges at the nexus of the real world and one potentially beyond, beneath, or humming all around us. "The featured artists are trying to translate a spiritual experience into art," Grossman continued. "They are often pulling from a similar box of influences -- Kabbalah, alchemy, hermeticism, Tarot -- pulling on threads from different mystery schools and mystic and mythical systems."

Under this wide umbrella, the exhibition can be divided into categories of "high" and "low" magic -- high referencing ceremonial rituals passed down through centuries of literature, and low denoting witchcraft, folk magic and other more resourceful means of enchantment passed down orally, if at all.

Grossman, who ten years ago created the blog Phantasmaphile, which focuses on esoteric and fantastical matters, has been invested in supernatural matters for far longer. "I’ve been interested in magical things ever since I was really small," she said. "I loved anything having to do with mythology and fairy tales -- things I think a lot of kids are attracted to. That developed into me doing imaginative rituals and ceremonies and drawing pictures of magical creatures. As most people get older, they seem to grow out of that phase, but I just went deeper."

At its core, Grossman explains, the occult is about experiencing an immaterial realm, whether through a performed ritual, an altered state, a path of learning, or a work of art. Grossman had her first encounter with the latter via the work of René Magritte, the Belgian Surrealist painter known for his use of beguiling bowler hats, floating green apples and pipes that may not be what they seem.

"While I don’t consider him an occult artist, he was this gateway for me in realizing art was something you could have a relationship with, something you could feel and not just think about. Art opens up portals to these realms that felt mysterious and otherworldly." From Magritte, Grossman was introduced to artists who more easily fit into the occult description, artists like Leonora Carrington and Remedios Varo.

Carrington, primarily based in Mexico City, painted magical realist themes in evocative detail, rendering limber, androgynous princes and enchanted humanoid owls with equally naturalistic precision. While most male Surrealists of the 1940s regarded female sexuality as their muse and inspiration, Carrington opted to portray a woman's eroticism from a first person vantage point, experiencing rather than analyzing themes of sexuality and desire.

One of Carrington's 1950 paintings, titled "El Nigromante (The Conjurer)" is featured in Grossman's show, much to her continued amazement. The work contains an assortment of monochromatic fantastical beasts against a blood red wall, all congregated around a diamond-faced being holding a many-limbed monkey. The actual meaning and symbolism of these characters is lost on me, though their emphasis is not. Failing to properly name or recognize a single element on the canvas, the viewer lets go of the will to understand and explain and begins to experience something else. Something like a door you never quite noticed before. A portal that leads to the same space, made somehow different.

As Grossman explains, the artists of "Language" don't just incorporate magical imagery into their work. They infuse the work with the supernatural itself. "The majority of artists in the show are using these images to give both themselves and the viewer a mystical experience," Grossman said. "They're not just using the tropes of the occult because it’s cool or interesting, which we see a lot in contemporary art. Their work is a spell."

To clarify, Grossman doesn't condemn the recent cultish fascination with occult imagery that's sprung up amongst a certain Millennial demographic. In her view, the trend has roots that stem beneath the intriguing surface. "These images bubble up when it’s time," she explains. "They have never gone away. Nowadays, people are longing for some kind of alternative spiritual experience. When people feel disenchanted by mass religion, mass government, capitalism, they turn toward something deeper. I think that is, broadly, a really good thing."

"Language" places contemporary and historical artists in conversation, sometimes directly or indirectly. The juxtaposition of various spaces and perspectives illuminates the evolution of a system of symbols and beliefs that dates back before recorded history. It's interesting to see the way past and present converge in this alternate realm, moving at a pace all its own. "Magic is a living system," Grossman explains. "Using images that are hundreds if not thousands of years old, many of the artists comment on something that’s happening in their own lives in contemporary times."

One artist situated firmly between past and present is the iconic Aleister Crowley, known primarily for founding the religion and philosophy Thelema. "A lot of people think of Crowley as a magician, a writer and a leader of a religion. But he dabbed in fine art quite a bit as well," Grossman noted. "He saw art as a profound and potent way to represent the spiritual experiences he was having."

Crowley's work in "Language," titled "Kwaw (Imaginary Self-Portrait)," is just that -- a self-portrait of a man who looks nothing like Crowley in real life, but nonetheless represents some essential persona within him. "It looks like someone of Asian descent, this creature or being named Master Kwaw," Grossman explained. "This self-portrait is meant to remind the viewer about going against one’s natural tendencies. It’s about making sure you do not fall into your patterns that you naturally fall into. Make sure you’re in balance."

The show is physically divided into five galleries, divided by theme. The first gallery, "Cosmos," features mainly diagrams, maps and schemas. On view is the late Paul Laffoley’s "Astrological Ouroboros," which features the 12 signs of the zodiac as they correspond to various stages of attitude in life and cycles of death and rebirth. Laffoley, who was diagnosed with Asperger’s syndrome at a young age, is often categorized as an outsider artist, due to the obsessive nature of his works, which he guesses take about 15 years to fully comprehend, each.

While Grossman isn't convinced there is a direct link between outsider art and occult art, she does recognize the way both loosely defined fields are often delegated to the outskirts of the art world. "Occult art has often been marginalized. It’s something that, up until fairly recently, was kind of sidelined and trivialized in the academic world and the institutional world. It’s ironic because a lot of the most canonical artists of all time -- Kandinsky, Rothko, Pollock -- were trying to do exactly the same thing. Using art to help us transcend."

The second gallery "Spirits" explores diverse beings, forces and creatures spawned from the imagination throughout time, such as Kiki Smith's mystical hybrid animals. The third, "Practitioners," highlights witches, magicians, seers and other breeds of magic-makers. Crowley's work fits in here, as does his compatriot Cameron, a witch and multi-disciplinary artist who commuted via hearse and dressed according to the phases of the moon. There's also the work of Argentinian surrealist Leonor Fini, self-proclaimed "queen of the underworld," who enjoyed dying her hair, painting her dreams, and surrounding herself with Persian cats.

Then there's gallery four, "Altar," which serves as an active altar-space honoring late occult-Surrealist forebears, Kurt Seligmann and Enrico Donati, through the work of artists Jesse Bransford and Rebecca Salmon. And finally, gallery five, "Spells," exalts artists who, through their work, enact something that can only be described as magic. For Grossman, no work embodies this idea better than Carrington's black-and-white-and-red-all-over "El Nigromante."

Through a discombobulating combination of colors and shapes, the viewer's perspective is shifted, her balance tipped off. In Grossman's words: "Through her painting, she turns herself into a magician -- and reminds us that we each have the power to do the same."

In sum, Grossman hopes the combination of mystical imagery, mythical teachings and dark forces bubbling beneath the exhibition will not just inspire viewers to dabble in hexes and spells -- though that's certainly encouraged. Rather, Grossman hopes the enchanting experience of encountering occult art will awaken viewers to a new way of art viewing, one where feeling is privileged over knowing. In this sense, occult art echoes the possibility of outsider art and even abstract art in awakening the (often intimidating) power of visual expression.

"I really hope the show gives people permission to have a relationship with art that is of the spirit and not just of the mind," Grossman said. "I think analyzing art is really important, as is understanding the historical or political context. But I really hope the show helps resurrect the imagination and helps validate that experience as well."

"Language of the Birds: Occult and Art" is on view at 80WSE Gallery at New York University until February 13, 2016.

PHOTO GALLERY
Cameron Cinderella of the Wastelands
Download
Calling all HuffPost superfans!
Sign up for membership to become a founding member and help shape HuffPost's next chapter
Join HuffPost 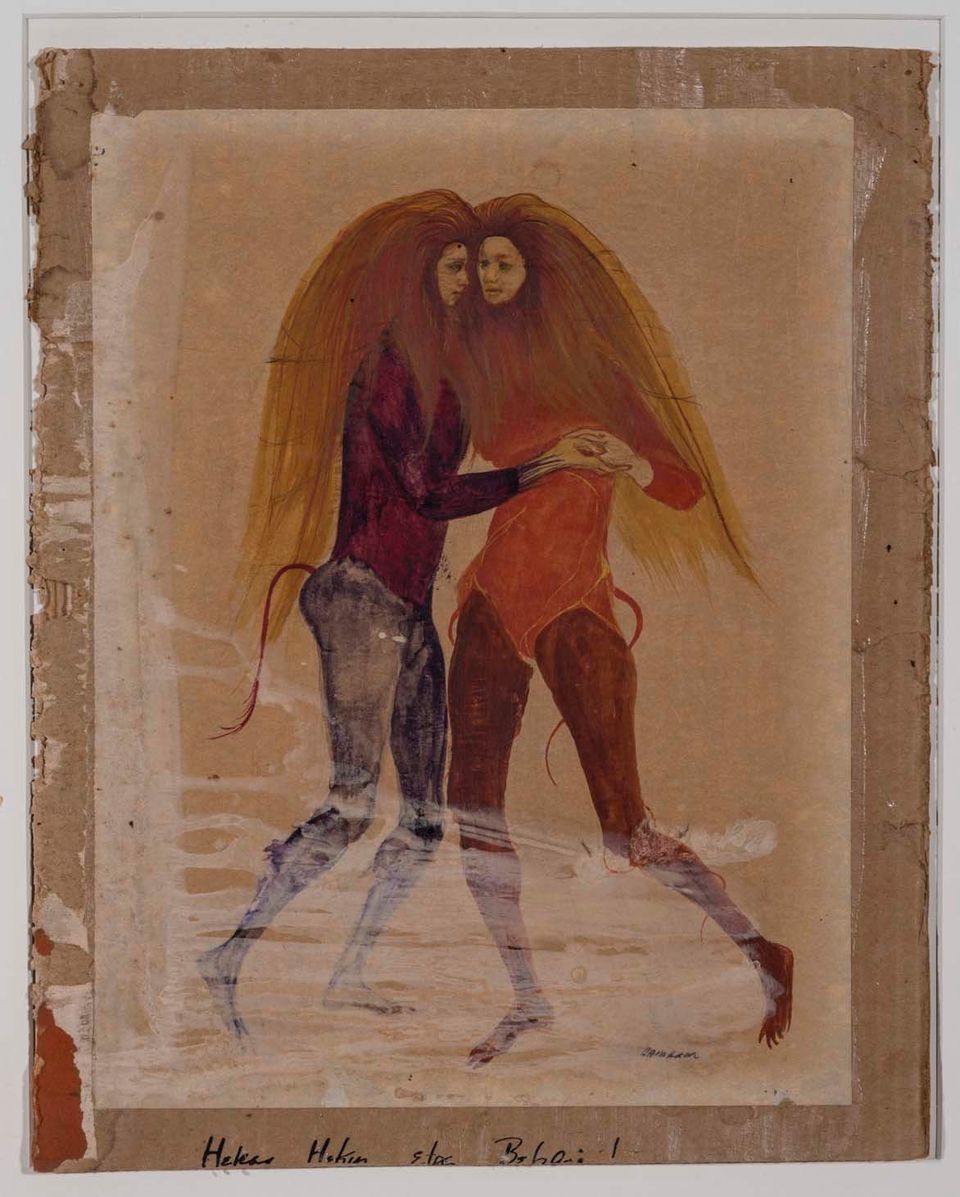