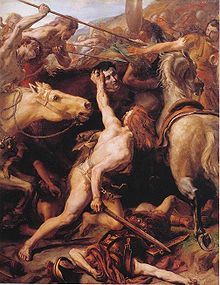 There arise during times of crisis leaders who reflect and distort the fears, prejudices, and dark fantasies of a group, nation, or larger collective. These leaders can represent shadow aspects of our higher aspirations, what good intentions alone cannot account for. I may desire to be wise, loving, and forgiving, but the guy who cut me off on the freeway deserves to be fried in hot oil and paraded naked through the streets. So much for good intentions, at least in the heat of the moment.

In groups and larger collectives, these individual frustrations can become magnified. We project them onto symbols that appear to be the causes of our distress and therefore deserving of our anger. Rather than a fleeting image, such as someone cutting me off on the highway, I can construct with others a permanent image of an enemy. And over time, that symbol can appear to become an objective reality, external to myself and having nothing to do with my having had a hand in creating it. We are seeing this today with the fear and anger directed at Muslims.

Taking a cab from the Las Vegas airport, I had a firsthand experience of being an embodied symbol of something threatening. After I answered the cab driver's question that we had come from San Francisco, a brief tirade ensued on liberal cities and how we needed to keep our eye out for liberals who would destroy our country. I said that I would keep an eye out for them. The cab driver responded by tweaking the rearview mirror and saying that he thought he had some in his back seat. There was a bit of an awkward chill in the 100-degree heat of the desert. We eventually found common ground talking about Donald Trump's candidacy and how he was saying things a lot of people were thinking.

And this is what brings me to demagoguery. What a demagogue does well is focus the unfiltered thoughts, frustrations, and webs of threatening images into a coherent story, a latticework of blame, shame, and fantasies of revenge.

The word demagogue is derived from the Greek words demos and ago. Demos means populace, referring to the common folk of the ancient Greek state. You will recognize the same root in our cherished word democracy, meaning the rule of the common people. Ago is a verb meaning to lead, guide, or bring, such as bringing someone or something to a particular destination. As it was first used in ancient Greece, demagogue had no negative connotation. Only after the cracks and shadows of democratic rule became more apparent did we grasp a particular kind of leadership in a democracy that encourages group hatreds and violent polarization.

A demagogue is a leader who appeals to and excites the negative emotions, prejudices, and ignorance of a populace for the purposes of political power. It is a term particularly associated with the excitation of prejudices in the less well off, many of whom may wish to identify with a strong, dominant leader. What the leader promises is a simplified and literal view of morality, a clear division between right and wrong, us and them. As the word demagogue suggests, the leader is bringing the common folk to a destination -- a place of feeling justified in seeking domination, revenge, and superiority. Demagogues are cab drivers of chaos, constantly peering into the rearview mirror for threats and gunning their engines as a show of force. And of course, they can exist in both democratic and totalitarian societies.

We are all familiar with goose-stepping demagogues leading chants of "Heil Hitler" or ones hosting fabricated celebrations, such as the North Korean leader Kim Jong II. We are less fluent about demagogues on our own homeland. There was Father Coughlin during the Depression, railing against Jewish bankers and Wall Street while indicating a certain fondness for the rising Nazi regime. There was Sen. Joseph McCarthy in the 1950s, who electrified his reelection campaign by staging a crusade against communist subversives and claiming that there were 205 of them in the State Department. What was common in their approach was a skill at launching deeply personal attacks on a perceived other -- Jews and FDR in Coughlin's case, communists in McCarthy's.

And today we see the seeds of this form of leadership rising again, an intensification of personal attacks and the stigmatization of an other. At first it can seem almost whimsical, a bit of fiery rhetoric here, an insinuation there, an exaggeration for good measure. Political aspirants such as Donald Trump, Ben Carson, and Ted Cruz, though prone to all these behaviors, are not the problem. They are symptoms of a much larger disease, a splitting in the collective, both locally and globally, moving us toward a justification for violence. The past few days following the San Bernardino shootings have made this abundantly clear, though much of the focus has been on Trump's call to ban all Muslims from entering the country.

But we don't have to go along.

Here is the salient point. Demagogues are creations of the collective as much as they lead groups into warfare and hatred. They exist as a funnel for existential fears and frustrated longings. By reducing complexity down to simple answers, they make themselves into emotional magnets for dis-ease. How do we resist such temptations?

First and foremost, we resist by not becoming part of the madness. We combat the literalness of polarizing oratory by becoming more nuanced in our own thinking. We battle the externalization of an enemy by addressing our own inner conflicts. And we go beyond solely the personal by calling out the mis-direction of leaders who advocate only for their own group or ideology. Finally, we join with others to become organs of change.

There are so many of us desiring to be healthy cells of a global interdependent body. The demagogue's cry for polarization must be our call to honor what we value. We seek change not because the world must forcibly be repaired but because life is sacred and collaboration is the best means to achieve genuine transformation.

And if we do that, we will see the emergence of transformational leaders, ones who transmit an understanding of an interconnected world. We will know their leadership by how they move us away from the precipice of continual warfare and toward a consciousness of collective responsibility. They will communicate that the deepest crises we face, such as climate change, poverty, and powerlessness, require collective and coordinated responses. In the end, the lesson is that we are all capable of this kind of leadership, and the destination we travel toward will emerge from our collective imagination. Let it be a destination that is worthy of our courage and compassion.