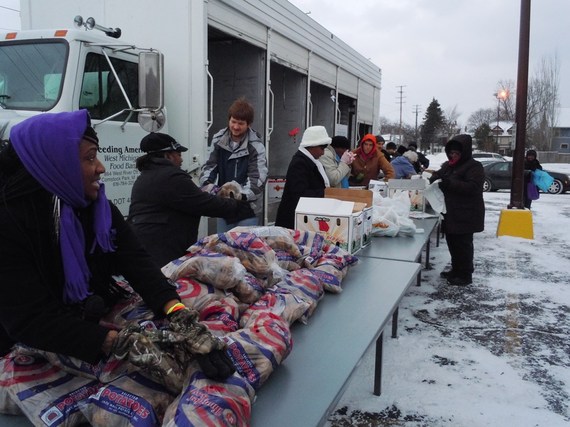 Never in our 33-year history has Feeding America West Michigan Food Bank distributed more food than we did in 2013. Last year, our organization sent out 25.6 million pounds of groceries and household goods -- approximately 20 million meals -- to communities in 40 Michigan counties, an increase of more than nine percent over 2012.

In one sense, that's a good thing: The community has the ability to meet a growing demand. The bad thing is that this demand exists in the first place.

Right now, hunger affects one in six people in the United States. According to Feeding America's last nationwide survey, conducted in 2011, 316,000 are at risk of hunger in West Michigan and the Upper Peninsula. This year's surge in demand indicates that the current number may be higher.

And in the coming months? All the indicators we have point to increasing demand.

Progressive Missionary Baptist Church in Benton Harbor, a small town that gained notoriety for coming under state control in 2010, took advantage of new funding from the Walmart Foundation and others to begin hosting Mobile Pantries in 2013. On top of that, coordinator Diane Dale explained, Progressive, with help from another local church, turned their ad hoc benevolence ministry into a full-fledged food pantry with regular hours.

All told, the church distributed 96,000 meals through the Food Bank, and they're just one of the more than 1,200 agency partners fighting hunger in the region.

With the economy on the upswing, it seems counter-intuitive that demand would be increasing. We see two factors at work: limited job opportunities and decreasing public assistance.

Although the number of jobs has been growing in recent years, these aren't the kind of jobs families can live on. Many people I talk to at my own church in Allegan County don't make enough to cover even their basic needs.

Dale sees the same thing in Benton Harbor: "They take their work check and pay for [utilities, transportation, etc.], and after that they don't have enough to buy food for their kids."

This is the classic dilemma of American poverty: Without a job, a client has to turn to food pantries and public assistance; when she finds a job, she loses her public assistance and sometimes winds up with less than she had before; either way, she doesn't have enough to get by. For many, the work requirements included in the House's version of the Farm Bill could turn this situation into a true catch-22: by making food assistance available only to those who make too much to qualify for it.

Public assistance has already been cut substantially in the past few months. The extension of long-term unemployment benefits expired with the end of the last congressional session, leaving nearly 44,000 Michiganders without what may have been their only source of income. Food stamp allotments were reduced for all recipients back in November with further cuts likely to be included in the next Farm Bill.

Yet the Food Bank's record-breaking year shows that, with support from food donors and financial supporters, charities are capable of doing much to combat food insecurity. Support has already come pouring in to replenish our aging fleet, a critical component of our food distribution model. An additional $97,500 is needed to meet our goal for 2014.

Those interested in joining the effort to solve hunger in West Michigan and the Upper Peninsula can get involved by donating or volunteering.

Regardless of where you live, get connected with your local food bank. Hunger affects people in every corner of this country, and all of us have a responsibility to address it.