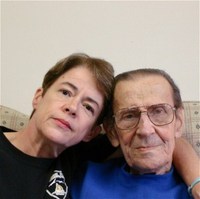 It is often said that animals and children reach dementia patients on a level people cannot. Every time Ed, my Romanian soul mate of 30 years, saw my little Shih Tzu, Peter, he said, "Oh, the lee-tle one. I love him so much."

I often took Peter to the Alois Alzheimer Center, a wonderful long-term care facility in Cincinnati for patients with dementia. And most of the time, as soon as we'd enter the lobby, Peter was the center of attention. Tom would suddenly smile, which made me smile, too. Carol would cradle her little bear in her left arm, lean down, and pet Peter with her right hand.

I knew Joyce liked Peter but since her eyesight was so poor she couldn't see him. So I'd pick him up and hold him close to her face. With a vacant expression, she'd pet his head. Often he responded by licking her face, which she allowed until he started licking her right on her lips. Then she turned her head away in disgust.

I found Ed in his room dressed nicely in black Dockers and a crisp red and white pin-striped shirt one day when I arrived with Peter. Ed was dozing in his wheelchair, as had become usual.

"Hi, Ed. Here we are," I said, certain my voice was loud enough to awaken him.

He lifted his head and saw us.

Ed didn't even look at me.

I put "lee-tle Pe-tair" on Ed's lap as I had done so many times before,

Ed started stroking him slowly, his hand starting on Peter's head and moving down his back all the way to his tail, then back to his head again and slowly down his back. I sat down in the rocking chair, sure Peter would squirm, jump down and come to me as always.

He just stretched out, closed those enormous brown eyes, and rested his chin on Ed's arm. Watching them was almost like meditating.

"Does he like it when I 'pad' him?" Ed asked, looking at me expectantly.

After a while I went into Ed's bathroom to wash my hands. Peter jumped down and went with me. He always insisted on going with me wherever I went in the facility.

When we came out Ed looked at me seriously and said, "You are so beautiful, and I really mean it. It's from my heart -- not just words from my mouth."

I put Peter back on Ed's lap and he resumed "padding" him. When it was time to leave, I started putting on my jacket.

I was startled. In 30 years, we'd never said those words to each other. We just knew it and never felt the need to say it.

As I was driving home I realized he wouldn't remember that feeling the next day or perhaps even the following hour, but he had experienced love for those few moments and that's what mattered.

I then asked myself, "Why did it take 30 years and one of us getting dementia to say 'I love you'?"

For more about my relationship with Ed, read my book, Come Back Early Today: A Memoir of Love, Alzheimer's and Joy, and visit my website, which contains a wealth of information about Alzheimer's caregiving.

PHOTO GALLERY
13 Resources For Caregivers
Download
Calling all HuffPost superfans!
Sign up for membership to become a founding member and help shape HuffPost's next chapter
Join HuffPost
Voting Made Easy
Register to vote and apply for an absentee ballot today
Register now

Dementia And A Shocking Declaration Of Love
13 Resources For Caregivers