Do you find your dog wandering around like she is lost? Is she no longer excited to see you when you get home? Does she keep you up at nights with her pacing and barking? Has your cat lost interest in playing with his toys? Does he get stuck between his litter box and the wall?

They may be experiencing symptoms of Cognitive Dysfunction Syndrome, or a dementia similar to Alzheimer's disease in people. 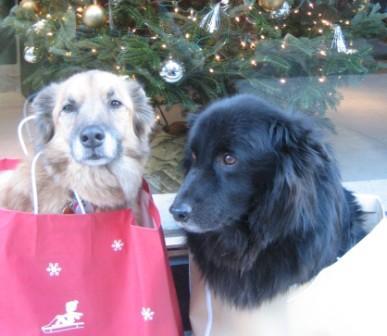 Sally's husband of 70 years died the week before she came to see me. As Sally, who suffered from Alzheimer's disease, walked into my office, she smiled broadly without betraying her recent loss.

Her daughter and I watched her carefully for any signs of sorrow. After a few minutes, Sally became a little preoccupied and kept looking anxiously around the office.

"What's the matter, mom?" her daughter asked gently. "Are you missing dad?" The truth was that Sally had shown few signs of grieving.

"Why would I do that, honey?" Sally said reproachfully. "You know your dad's at the dentist! My question is," and here Sally turned to me, "where are your dogs, doctor? How come they aren't here today?"

Max and Wolfie at Work

Such is the appeal of Max and Wolfie, our two Great American Mutts who accompany me to work daily. They have ministered to countless patients, disarming and putting them at ease. And here was Sally, forgetting that her beloved husband was dead, but remembering that the dogs were not around. While the analysts among us could have a field day with this, I put it down to the extraordinary benefits that pets and dogs have on the elderly as they get demented.

Dogs help the elderly keep their blood pressure down, reduce depression and anxiety and keep those with dementia smiling longer. Dogs raise levels of the brain chemicals associated with relaxation and bonding, reducing aggression and agitation. Max and Wolfie have been integral parts of my neurology practice for many years, trotting to work with me every morning and plunging with gusto into the job of helping me care for patients.

They take their work seriously and behave with decorum, their demeanor changing instantly upon entering the office. Max, for example, a notorious forager at home, studiously ignores trash cans at work and Wolfie, generally reserved, stoically endures bear hugs from patients. They have starred in all our Christmas cards.

Now, alas, both Max and Wolfie are ill with dementia. Max, 16, ever an irascible rascal, became cantankerous. The Labrador in him kept stealing food although now he couldn't distinguish pebbles from kibbles, while the Chow in him began nipping at folk. Wolfie, 17, a Collie-Shepherd mix whose "elevator often does not reach the top floor" was slow when compared to the Machiavellian Max, but now he had trouble understanding even simple commands. Always tender-hearted and sweet, Wolfie was never aggressive but became more apathetic. He took to hanging out for long hours in the bathtub or in the shower stall. Max began to lose control of his bladder function.

Recently, Max and Wolfie started pacing at nights, constantly and continuously, keeping us awake and driving me mad from sleep deprivation. Even so, they still loved riding in the car and enjoyed being around family and friends and swimming in the pool. Given this ongoing joie de vivre, euthanasia was not an option.

The dogs were behaving much like some of my patients with dementia (which includes Alzheimer's disease, a sub-type of dementia). Many patients become anxious, pace and have trouble understanding language as their memory loss and cognitive dysfunction progresses. In time, some patients have trouble recognizing family and some may wander and get lost.

What's the Pathology? Is it similar to Alzheimer's in people?

Cognitive Dysfunction Syndrome (CDS) is well described in dogs and cats, with pathology mimicking Alzheimer's disease (AD) pathology in people. Although I am grateful that mice are the most common animal models used for studying AD, dogs may, in fact, be the better model. There are numerous similarities in risk factors, pathology, clinical presentation and treatment options between CDS and AD.

Dogs with CDS accumulate the toxic beta amyloid protein seen in the brains of patients with Alzheimer's. The deposits occur in similar brain regions and the extent of deposition correlates with the level of cognitive impairment, as in patients with AD. An increase in a specific brain tau protein is observed, although it never develops into the kind of insoluble tangles present in patients with AD. Dogs and cats have the same types of chemicals we humans do, including acetylcholine, dopamine and adrenaline. Reduced acetylcholine levels are seen in dogs with CDS and in people with AD.

Much of the research on CDS has been done on dogs, cat owners may or may not be happy to know, and extrapolated to cats. Dogs and cats experience similar symptoms and signs and are treated using the same medications.

What are the symptoms of CDS?

When questionnaires are given to owners of dogs with CDS, disturbances in four main behavioral categories emerge: disorientation seen in daily walks or at home; impaired interaction with owners; sleep/wake cycle disturbances with barking and pacing at nights and loss of continence. These areas are often impaired in AD patients, although of course, the manifestations are different.

Over a quarter of 11-12 year old dogs (28 percent) and nearly three quarters (68 percent) of 15-16 year old dogs are impaired in at least one of these categories. Much like in people, the risk for cognitive dysfunction in dogs and cats increases with age. While we have a 10 percent risk for dementia at age 70, over age 85 our risk climbs to 50 percent. In dogs as in people, there is a progression from mild cognitive impairment to frank symptoms of dementia. Dogs nine years and older and cats over 12 are at risk for CDS.

Female gender places both dogs and women at higher risk for cognitive impairment. Spayed female dogs are more at risk for CDS just as women who undergo early menopause or hysterectomies have a higher risk for AD.

How is CDS diagnosed?

The evaluation for CDS, as for AD, involves screening for reversible causes of cognitive impairment such as infections, endocrine problems and other ailments. Brain MRIs in CDS reveal brain shrinkage or atrophy and an increase in the size of the brain's ventricular cavities, parallel to findings in people with AD.

John McCue, a veterinary neurologist at the Animal Medical Center in New York City says that brain MRIs performed for behavioral changes may reveal large or small strokes. Other common conditions that exacerbate CDS and predispose to strokes include untreated hypertension, high cholesterol levels and poorly controlled diabetes. Similar issues are often uncovered in my patients with AD.

"It's only in the last eight to ten years that CDS is being recognized as a problem in cats and dogs," says Dr. McCue.

Treatment for CDS includes drugs that increase cerebral blood flow and stimulants such as modafinil (Provigil), but these show limited benefit. Drugs that raise levels of brain acetylcholine are not in common use for CDS although studies have found such drugs, including phenserine and donepezil (Aricept), to be effective. The most commonly used drug for treating CDS in both dogs and cats is selegeline (L-deprenyl, Eldepryl). This drug was used for treating Alzheimer's, but now has been supplanted by more effective alternatives like donepezil. I find selegeline may cause agitation in my patients with AD and no longer use it.

A Hills b/d diet of fruits, vegetables, vitamins C and E and antioxidants may be helpful in CDS. Dr. McCue cautions that dogs and cats with CDS suffer from serious weight loss due to increased caloric requirements from agitation. This has certainly been true with Max. Over the years, he has maintained a pleasant rotundity, scoffing at our attempts to restrict his diet. Since he developed CDS, however, he has lost a tremendous amount of weight. Interestingly, Wolfie, rail-thin all of his life, has gained some weight, but we concluded that this is because Max no longer steals his food.

Finally, environmental stimulation using exercise and new toys may help, much as cognitive remediation and exercise helps maintain skills in patients with AD.

As in people, quality of life in animals with CDS is important. This involves treating concomitant conditions as the animal gets older. Max has suffered over the last three years with CDS. About a year ago, he underwent tooth cleaning under general anesthesia, something we were loathe to do, but as his breath began to melt paint, there was no option. Sure enough, as in some of my patients with AD who undergo general anesthesia, his symptoms worsened after the procedure and he never returned to baseline.

About six months ago, arthritis began to plague Max and he was having difficulty walking. Our veterinarian resorted, as we neurologists often do, to the Sloan's Liniment and panacea for many things medical in pets and in people: steroids. However, the steroid prednisone had no effect and so I switched Max to celecoxib (Celebrex), a human drug I am familiar with, at a cost of $3 per pill.

In a funny caveat to this story, a few years ago I wanted to prescribe Celebrex for a patient with arthritis, but she demurred. It turns out that her daughter, a veterinarian, had placed my patient on carprofen (Rimadyl), a similar, less expensive drug made for animals by the same company.

I personally find Celebrex to be more effective than Rimadyl in my limited experience treating arthritis in dogs. Dr. McCue uses firocoxib (Previcox), another drug in the same chemical group as Celebrex. Of course, no medications, either over the counter or prescription, should be tried on your pet without a discussion with the veterinarian.

What was done about the collective sleep disturbance of our entire household? Over the last week, I put Max and Wolfie on melatonin which helps restore the sleep cycle in some of my patients with Alzheimer's. While the data on melatonin in dogs is mixed, I was leery of diphenhydramine (Benadryl) as it causes agitation in some of my patients. I did not want to put them on promethazine (Phenergan), a popular pet sedative, because of worry about lingering daytime sedation.

Dr. McCue notes that sedatives like diazepam (Valium) and phenobarbital may paradoxically cause agitation, another reason why I avoid these drugs in my patients with AD. He advocates melatonin at a dose of 3 to 6 mg for sleep disorder in cats and dogs with CDS.

Good news: the melatonin has kept Max and Wolfie sleeping through the night and we are all happier campers as the result.

"His ears were often the first thing to catch my tears." Elizabeth Barrett Browning

Dignity and quality of life are important goals for people with AD and for pets with CDS. In the twilight of their lives, Max and Wolfie deserve nothing less, having served us so well, for so long, and with such love. 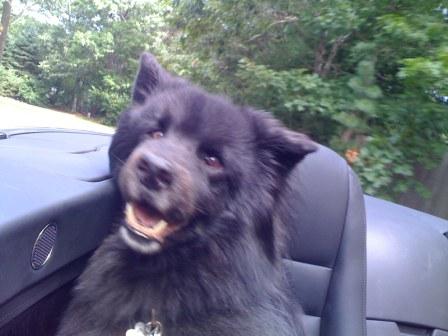 Max loved cars (2009)
Maximilian Tristan Lollipop (aka Max, Mackie, Moop or Pooh) was euthanized at home a little after midnight on Sunday by Dr. John Morehead, a superb veterinarian. After a weekend of characteristic overindulgence, he developed a severe case of gastroenteritis which left him in pain and dehydrated. Wolfie seems depressed but is holding his own. Auf Wiedersehen, Mackie.

Curtis W Dewey. Encephalopathies: Disorders of the Brain, Chapter 4 in "A practical guide to canine and feline neurology" Textbook. Wiley and Sons, 2008; 99-179; 720 pp.

More:
healthy livinghealthy-people-healthy-pets
Newsletter Sign Up
The Morning Email
Wake up to the day's most important news.
Successfully Subscribed!
Realness delivered to your inbox