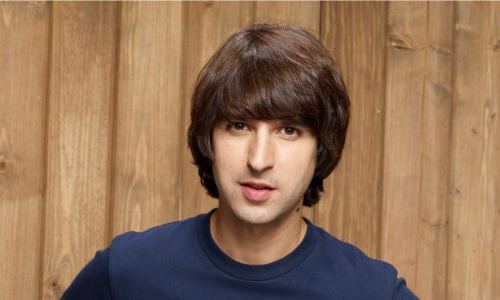 Demetri Martin claims to have a gay Beatle haircut. He also has a new comedy album. We ask Demetri Martin questions. He answers them. The following is the result:

HP: Do you enjoy answering interview questions or do you find the whole

HP: Tell us about your new comedy album. Is it strange to call it an album when it won't be played on a phonograph? Is it a departure from your past comedy specials? Is it more along the lines of traditional stand up?

Demetri: My new album is called Demetri Martin. Standup Comedian. It's available as a CD and as a download. It should be available soon on vinyl too. The album features me doing an hour-long standup show in a comedy club. Most of the hour features me telling jokes. Also, I improvise a little bit, and during the last few minutes of the album I tell jokes while playing a guitar.

HP: How did you develop your unconventional style of stand up? Who were your influences growing up; both from the world of comedy and elsewhere?

Demetri: I started doing stand up in New York in 1997. Most of the rooms I performed in then were not comedy clubs. In those rooms it was easier to experiment, so I tried a lot of different things. From the beginning I've focused mostly on jokes. It seems that two of the most basic forms of comedy are jokes and stories. And, of course, they are not mutually exclusive. Often I just tell jokes to the audience. Sometimes I use my jokes as building blocks for larger bits. I like to draw and play music, so sometimes I do those things along with the jokes. I've also done shows that were based more on stories. Those were "one-man" shows

that I performed mostly at comedy festivals in America and overseas. I enjoy that way of doing comedy too, but I gravitate more naturally to jokes. In the last few years I've improvised a lot more too. My influences growing up were Gary Larson, Steven Wright, Peter Sellers and my dad. Later I discovered Woody Allen, Albert Brooks and Steve Martin. Other influences include sucking at team sports as a child, not enjoying high school that much, wanting pretty women to like me, the desire to avoid day jobs, and my eventual death.

HP: Which of your jokes do your treasure as your favorite and why?

Demetri: Usually my favorite joke is whichever joke I most recently came up with that surprised me the first time I thought of it.

HP:At what point did you decide to switch gears from studying law and steer towards the world of comedy? Was there a eureka moment?

Demetri: I decided one day when I was sitting in class at law school that it was time to pursue comedy. The eureka moment was kind of long and protracted. It was more like a eureka semester.

HP: If you stayed with law, what do you think you'd be doing at this exact moment?

Demetri: I would be staying with it in an office somewhere.

HP:What are some of your comedy goals for 2013?

Demetri: In 2013 I plan to promote my book of drawings, Point Your Face at This. Drawings by Demetri Martin", which will be released on March
19. And I plan to shoot and edit the movie I'm currently writing.

HP: Tells us about Will and Moon People. What's the skinny/inspirations on the story lines.

Demetri: Those are the titles of two screenplays I wrote. I sold them as pitches to two different studios years ago. I've written several drafts of them since then. So far neither has been made into a movie, but maybe one of these days they will.

HP: Any parting words of wisdom to help us make it through the day?