Demi Lovato is just like us: She, too, deals with the highs ― and jaw-dropping lows ― of online dating.

In her new YouTube documentary, “Simply Complicated,” the former Disney Channel star opens up about using Raya, an exclusive dating app that features celebrities, athletes and other high-powered singles.

Lovato ended her six-year relationship with former “That 70’s Show” star Wilmer Valderrama in June 2016 and was recently spotted getting close with DJ/producer Lauren Abedini.

Though Lovato admits she’ll “never love anybody like [she] loved Wilmer,” she was actively looking on Raya while the doc was being filmed.

“I am on the dating app with both guys and girls,” says Lovato, who’s caused a bit of a stir in the past for not speaking up about her sexuality. “I am open to human connection, so whether that’s through a male or a female, it doesn’t matter to me.”

Always a good outlook to have while dating. And on a side note, Demi, could we recommend this as your main pic? (Cute dog + cute person = a recipe for right swipes.)

Or this one with Oprah because it screams boss lady?

The “Sorry Not Sorry” singer isn’t the first celeb to cop to using a dating app or site. Below, 11 famous people you could have swiped right on at one time or another.

Katy Perry is always open-minded, so it's no surprise she gave Tinder a shot. Back in 2014, Perry told the The Breakfast Club on Power 105.1 that she was "really deep on Tinder, so I don't have a whole lot of time." (True; looking for love on app is like a full-time job.)
2
Martha Stewart

No more beautiful place ever! Pritchard Hill home of pioneering wine family Donn Chappellet Grapes maturing on the vines Everyone getting ready for the upcoming harvest

Martha Stewart gave Match.com a chance in 2013, when the "Today" show helped her set up a profile. The domestic goddess -- who divorced husband Andrew Stewart in 1987-- went on dates with two men on the site. Martha's verdict? “They did a really, really nice job of being dates,” Stewart said, before noting that she would "absolutely" go on another date with both.
3
Eric Stonestreet

Kids- It's important to extend an olive branch and be a diplomat from time to time. #chiefs vs. #rams

In 2014, "Modern Family" actor Eric Stonestreet told Howard Stern that he tried Tinder. "I've gone out with a couple girls in LA that I met on Tinder, like on real dates," he said. "It's hard to meet people."
4
Lindsay Lohan

Lindsay Lohan posted an Instagram about matching with her brother, Michael, on Tinder back in 2013. "Look who I just found on @tinderapp ... hey bro," she captioned the shot. Lohan's dating history includes Aaron Carter, Wilmer Valderrama and Samantha Ronson.
5
Ronda Rousey

Ronda Rousey told Sports Illustrated that she created an alter ego, Brynn Campbell, for Tinder back in 2015, but like many of us, she hadn't had much success. "S---, the only person I'm making out with is my dog," she told the magazine. There's no need for Tinder these days. In August 2017, Rousey married fellow mixed martial arts UFC fighter Travis Browne.
6
Jenny McCarthy

Jenny McCarthy gave Match.com a shot back in 2011. She was specifically looking for guys between the ages of 35 to 48. “It’s so hard out here," she told Radar Online. "The guys are like chicks here… There’s no real guy guys, so maybe importing from somewhere will be smart. Anyone not from LA, I think.” She found love again -- and not on Match.com -- when she married Donnie Wahlberg in 2014.
7
Andy Cohen

Back in 2015, "Watch What Happens Live" host Andy Cohen told People he was a Tinder fan. "I like it," he said. "It's fun. You know, it's to me: Where am I going to meet an architect who lives in Brooklyn besides Tinder at this point? It's the modern-day singles bar."
8
Hannibal Buress

Me and some lady. Anyways Tommorow I'll be at the Hard Rock in Hollywood, Fl with @aljacksonig And @tonytrimm at 8pm.

In 2015, "Broad City" star and stand-up comedian Hannibal Buress told Cosmopolitan he'd given Tinder a shot. "I've used Tinder, but I have never met anybody from it," he said. "I'll match with people, and then they'll reference my character from 'Broad City,' and then that feels weird. They'll be like, 'Is this really Lincoln?' And I'm, like, 'That's not my real name. You see my name, it's on the profile.' So I've been on it, but I just haven't met anybody from it."
9
Adam Duritz

On HuffPost Live in 2014, Counting Crows frontman Adam Duritz said he was on Tinder, but he didn't have high hopes for matching with anyone. “I don’t think most people would even have me on their [age] range," the '90s alt-rock star said. "Most people my age aren’t on [Tinder]. They don’t even know how to use a phone.” He's definitely been lucky in the past; Duritz's exes include Jennifer Aniston, Courteney Cox and Emmy Rossum.
10
Deborah Ann Woll

During an interview with "Good Day LA" in 2012, "Daredevil" actress Deborah Ann Woll admitted she met her boyfriend, E.J. Scott, on Match.com.“I feel like we should get some money out of this," she joked of the shout-out she was giving the company.
11
Carrie Ann Inaba

My rescues make me happy! Read my story in this week's @people and let's help #cleartheshelters on 7/23! ❤️🐾 #animalrescue #adoptdontshop #rescuepets 👉Click the link in my profile to get this shirt or other animal shirts that help save lives!

"Dancing With The Stars" judge Carrie Ann Inaba was once engaged to a man she met on eHarmony -- accountant Jesse Sloan.In an October 2011 interview with "Access Hollywood Live," the pro dancer talked about matching up with Sloan. "I said, 'You need to be sexy' [and] 'I love cats.' He was the one they sent me, and it just felt familiar," she said. "[Looking at] his picture, I felt like I already knew him." The pair called off their engagement in 2012. In December 2016, Inaba became engaged to actor Robb Derringer.

Demi Lovato Claps Back At Halsey Over Shade About Bisexuality

Demi Lovato Opens Up About Her Sexuality

How Demi Lovato Is Using Her Voice To Elevate Mental Health 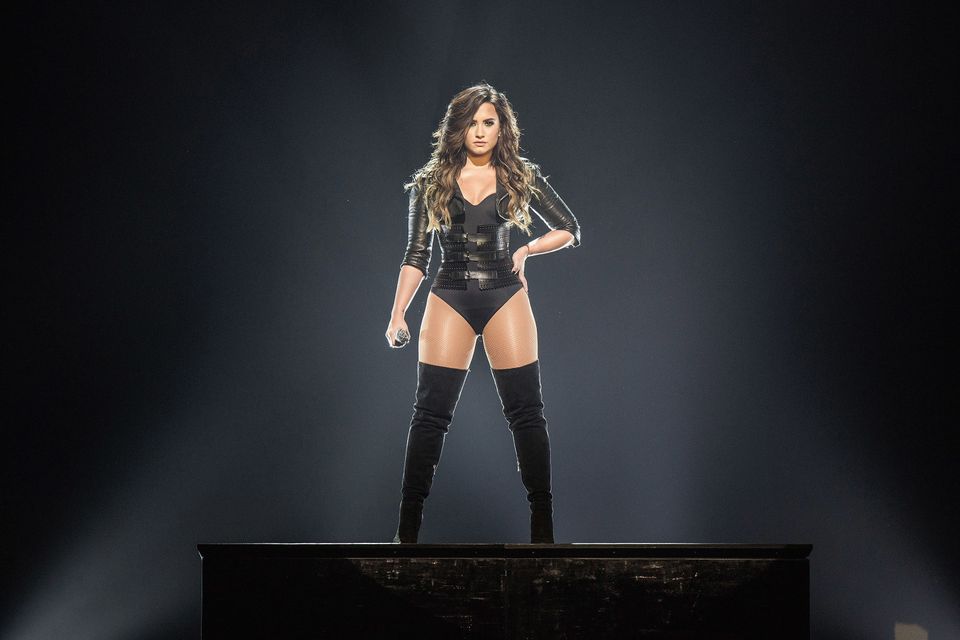