On Tuesday night, I received an aggressive and threatening letter from Martin Singer, Demi Moore's attorney. It is marked "Confidential Legal Notice - Publication or Dissemination is Prohibited". However, since Mr. Singer and I have no confidentiality agreement, and it provides essential context to the matter at hand, I have decided to publish it [pdf].

I'll start by expressing how bizarre it feels to be immersed in a controversy that should be no controversy at all. The question of whether a celebrity was over-retouched is not one I am particularly proud of spending my mental cycles on.

When I originally pointed out (in a friendly, lighthearted way) a simple retouching blooper, I had no inkling of the total shitstorm that would follow. It gained momentum quickly, and I commented to several media outlets on the matter, always sure to frame it fairly: I have no problem with digital retouching (do it all the time), no problem with Demi Moore (she's a beautiful woman), think the image is a great shot (kudos, Mert and Marcus) - I simply thought the missing hip-chunk was funny. I thought we could all laugh about it for the day (maybe tack it up on a retoucher's wall of shame) and move on to the far more important things. We are all human; we all make mistakes (me, more than my fair share.)

But as the story gained traction, Ms. Moore published what she claimed was the original, while describing my initial commentary as "bullshit". Several media outlets backtracked, folding like the lawn chairs so many of them are. Some went so far as to say she had "proven her point" and that I had some apologizing to do. Well, I take no pride in arguing over something so totally vacuous, but I do take great pride in my reputation, my integrity, my visual and creative acumen, and my credibility as a journalistic source. In fact, as Mr. Singer and his client are undoubtedly well aware, I have invested an entire lifetime building them, and my career and livelihood depend on them. And believe it or not, in the eyes of many (especially in a place like Hollywood) something as dumb as this can deal a serious and embarrassing blow.

So I knew sitting idly by while my veracity was attacked was not an option, especially in light of the huge reach of Ms. Moore's words and my sincere belief that I was right. So after sleeping on it, I put my money where my mouth was and offered $5,000 to a charity of her choosing if she proved it really was the original. Unsurprisingly, my offer fell on deaf ears. In the following weeks it quieted down, and I thought (and hoped) it was over - until I received Mr. Singer's letter.

I spent several days considering how to respond. On one hand, I do not want a fight over something so pointless; but on the other, my personal reputation is under attack.

Mr. Singer: I did not insinuate that your client was untruthful or hypocritical. I did not imply or infer that the photo was manipulated at her behest. I simply said that the photo had very obvious signs of clumsy retouching, most particularly what appeared to me (and thousands of others) to be a missing chunk of hip.

And I absolutely stand by my statements.

I also have a very hard time understanding what is "defamatory" about describing an image as retouched. Digital retouching is an important part of modern publishing and photography workflow. I doubt a single image has graced a major magazine cover in the past decade without being altered in some way. Ms. Moore's implication that her image went straight from camera to cover is incredible, whether she believes it or not. Simply put, this never happens.

In the statements solicited by Mr. Singer, W's Dennis Freedman says "no one at the magazine did any retouching of the image." Mert and Marcus say there was "ABSOLUTELY no retouching on her hips or waist or legs." This brings Nick Paumgarten's 2004 New Yorker article to mind, wherein Mert and Marcus' digital artistry is discussed extensively. In describing Mert and Marcus' work, Mr. Freedman himself said:

"there is an artificiality about it that can be upsetting."

Upsetting?? Frankly, I love it! But regardless, their recent statements fail the straight face test. Even without any serious digital forensics, zooming in on Ms. Moore's "original" image reveals either a serious physical deformity in her left thumb - or the painfully obvious artifacts of clumsy retouching: 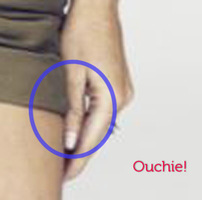 And digging a bit deeper, if we compare Ms. Moore's "original" with the final W cover photo, we see unequivocal signs of digital retouching (not that there's anything wrong with that). Below, I layered the two images atop one other and animated three small sections to accentuate the changes. The loops are very short, so you may have to replay them a couple of times.

One, pay special attention to the area of her hip inside the "R" and against her left hand:

Two, the contours of her right thigh and hand are changed:

Three, the waist and upper chest are tweaked:

And these animations merely represent the changes between Demi's "original" and the final cover; they say nothing about whatever retouching occurred upstream of the two public images, and the public consensus seems to be that they were significant. Regardless, there can be no doubt as to whether the cover image was retouched.

Mr. Singer describes his client's appearance of great importance to her career and livelihood. I absolutely understand and respect that, and never said a single negative word in that regard. This was not about her; it was about noticing a mistake. In fact, as this story was exploding and W sat silent, I spoke out in Ms. Moore's defense several times, even expressing exasperation that she had been forced to explain the mistakes of others. Those remarks are widely available throughout the public record.

I would also like to reiterate that, while my livelihood is not dependent on my appearance (thank God!), it is dependent on my personal reputation and my perception within the media, technology, and entertainment industries as someone of integrity, reliability, and candor. Thus, Mr. Singer, I urge you to seriously consider the damage your client's public statements have had on me, as well as the serious discrediting effects of the public statements made by those acting at your and your client's behest. Your collective implications - and actual allegations - that I have been dishonest, deceptive, or defamatory are themselves seriously damaging. This is most particularly true because your allegations are fully and absolutely unsupported by the facts.

Finally, Mr. Singer: your demand that I retract my statements is a demand that I do further unwarranted and costly damage to a reputation you have already deliberately tarnished. Demanding an apology adds insult to this injury. Obviously, neither of these will be forthcoming.

On the contrary, I demand a complete retraction of all statements made or solicited by you, your client(s), and W that denied this retouching, and served to deliberately impugn my credibility and that of countless others who made similarly fair and accurate observations. I further demand a sincere and prominent public apology.

In closing, what might be most surprising about this is that Ms. Moore has clearly embraced the incredible power of the web. As she surely knows, what makes the web beautiful is its rich diversity of opinions and ideas; free expression is in its DNA. But by asking her attorney to intimidate, bully, and silence critics and fans who are guilty of nothing more than speaking unpleasant truths, she is enabling conduct that strikes at the very heart of free expression.

So let's get this behind us and talk about something that actually matters.

Crossposted from my fashion photography site.