The recent announcement that KCET, L.A.'s flagship public television station, cut its ties to PBS as a result of a protracted financial dispute with the network, was met with disbelief. You could hear the outcry: What would happen to the innocent children -- all those little angels in our city -- deprived of their beloved Sesame Street? And how will aging Baby Boomers manage without their Antiques Roadshow and News Hour? But come now, dry your tears and rest assured: KOCE, the Orange County-based public TV station, announced that it will fill the void and start to broadcast these beloved programs in Southern California.

There is no word yet about what kind of new programs KCET's management is preparing as replacements for these stalwarts. Being a cautious optimist, I hope that soon we will hear that KCET has figured out how to make the best of its controversial departure from PBS and is taking chances with some edgy new programs. To be completely honest, these days I rarely watch KCET, making exceptions for only Charlie Rose and Tavis Smiley when they interview some interesting guests. 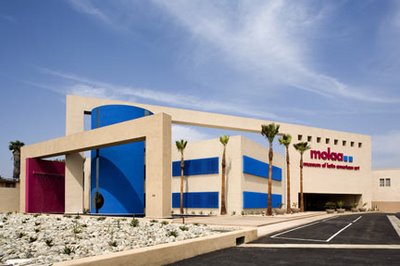 While in the last couple of decades the Los Angeles artistic and cultural scene has dramatically expanded, its coverage in the press, on the radio and on TV has gone in the opposite direction. Ten years ago, I was asked to be the Art and Culture Editor for KCET's Life and Times Tonight, so once per week, I talked about the best that L.A. museums and galleries, theaters and concert halls, had to offer. It was a lively program, with museum curators sometimes bringing priceless art objects onto the set and co-host Pat Morrison teasing me about some of my selections. But it was an uphill battle to get permission to take a small crew to museums to cover interesting exhibitions and have conversations with some of L.A.'s truly fascinating people: artists, collectors, dealers and other cultural figures. Unfortunately, due to a lack of enthusiasm and funding on the part of the management, this cultural coverage -- in spite of a strong public response -- was canceled within a year. With many years of experience as an art critic for KCRW, I can solemnly swear that our City of Angels has a vast treasure trove of art world stories begging to be told, and one only hopes that KCET will seize the opportunity to serve its public the artistic feast it deserves. 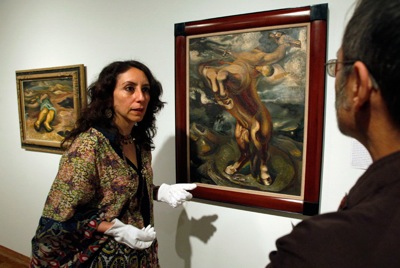 In search of an interesting exhibition to recommend in today's Art Talk, I went on Sunday to the Museum of Latin American Art in Long Beach, to check out the promising exhibition of small paintings by David Alfaro Siqueiros. Along with Orozco and Rivera, two other famous Mexican painters, Siqueiros is celebrated for his monumental murals, but his easel paintings haven't aged well -- and I'm not talking about their physical condition. In his abstract compositions and landscapes, the artist was earnestly trying to convey a sense of cosmic struggle, but the resulting works come across as heavy-handed and not very convincing. 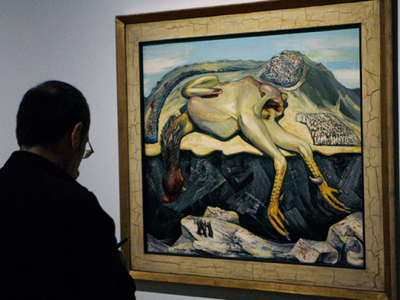 One thing I always count on, going to this museum, is its small but full-of-amusing-surprises gift shop, with prices difficult to beat. In addition, I always treat myself to a good cup of coffee in the museum café -- this time accompanied by a delicious pumpkin empanada. Yummy.

And I always save a few minutes for a visit to the nearby St. Anthony Catholic Church. Its walls and ceiling are covered with beautiful, intricate mosaic compositions, making it one of my favorite houses of worship in Southern California. Not a bad way for this critic and professed nonbeliever to end the day, don't you think so?

Siqueiros: Landscape Painter
On view at the Museum of Latin American Art through January 30, 2011