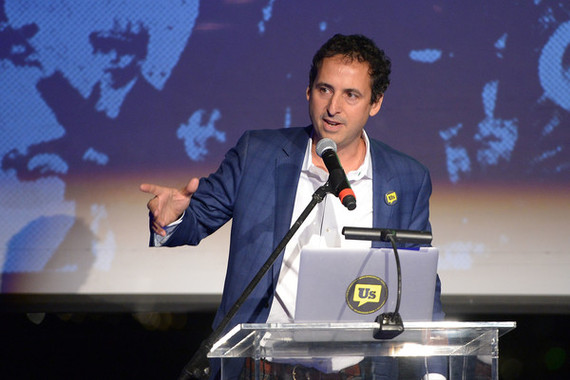 Josh Silver speaks onstage at the OF BY FOR Awards presented by Represent.Us on October 27, 2016 in Beverly Hills, California. (Source: Charley Gallay/Getty Images North America)

There is no question the political landscape has drastically changed after the 2016 election. For many, hope that the incoming administration will pass meaningful election reform has died. Moreover, many state houses are filled with money-driven politicians unlikely to be swayed by reformers. As a result, to save our democracy activists are increasingly looking to the ballot-initiative process to sidestep elected representatives. I chatted with a leading innovator of this strategy, Josh Silver, founder of Represent.Us, a non-partisan anti-corruption organization. The group, founded in 2011, succeeded in getting numerous anti-corruption initiatives on the ballot this year and many of them were approved by voters. Here is our conversation:

Adam Eichen: How did Represent.Us get involved this election cycle?

Josh Silver: This year, Represent.Us members worked with local, bipartisan coalitions on ballot initiatives in South Dakota, Washington State, and San Francisco. In the first two, they filed initiatives to crack down on conflicts of interest, increase transparency and enforcement, and empower voters with citizen-funded elections. And we emerged victorious in South Dakota. In the San Francisco campaign, our members succeeded in passing a strong lobbying reform law in the city that bans lobbyists from giving gifts to politicians. We just barely lost in Washington State--the margin was decided within a few percentage points.

Eichen: And so what did your members do in those areas?

Silver: These initiatives were driven by our members who came to us and said, "We want to do something in our community." We helped them draft and file their initiatives, gather signatures, and assemble campaigns to get out the vote. This is a bottom-up movement, where local volunteers who are passionate about ending political bribery and restoring power to the American people are in the driver's seat.

Eichen: Overall, do you think this election cycle has been successful for Represent.Us?

Silver: Extremely successful. Taken all together, we saw thirteen important victories across the map. Represent.Us members passed the powerful San Francisco lobbyist law, along with two countywide resolutions in Illinois calling for the passage of anti-corruption acts. Eight other locations likewise saw substantial democracy reform victories at the ballot, from ranked choice voting in Maine and a county in Oregon, to calls for reversing Citizens United in two states, Washington and California, to reform measures like implementing campaign contribution limits in Missouri. And in South Dakota, a deeply conservative state where 62% of voters cast their ballots for Donald Trump, our members proved that conservatives and progressives alike support comprehensive anti-corruption laws that include citizen-funded elections. It reinforced our strategic theory that these kinds of laws can be adopted anywhere in America if they are positioned, written, and campaigned in such a way that both progressives and conservatives can join hands and rally behind them.

Eichen: So, do you see ballot initiatives as the future for the Democracy Movement?

Silver: I think it's a really important part. It's not the whole picture, but it's an important part. Moving forward, in addition to advancing the campaign finance, ethics, and transparency laws that we saw passed in South Dakota, Represent.Us will also be pursuing ballot measures that fix our broken elections. We're tackling gerrymandering through the creation of independent, non-partisan commissions, and giving voters more choices at the ballot by creating ranked choice voting and open primaries. These reforms will end the "spoiler problem," so voters aren't forced to choose between the lesser of two evils. They'll depolarize politics and make elections and American politics more civil. So, it's a three-pronged strategy: three kinds of democracy reforms at the ballot in 2017 and beyond. As we redraw the political map of America, we'll re-establish a functional democracy as the norm, and the current corrupt system will become the exception.

Eichen: With a Republican president-elect, Congress, and potentially Supreme Court, do you see any possibility of nationwide democracy reform? Or are state-level reforms the best we can hope for?

Silver: The composition of the federal government reinforces our strategy and premise that Congress won't do anything on this issue anytime soon. Donald Trump has pledged to close the revolving door and tackle other elements of quid quo pro corruption, but it is yet to be seen if his words will turn into action, and it is hard to imagine Paul Ryan and Mitch McConnell approving his agenda.

Eichen: Despite the inability of the federal government to pass reform, do you see the Democracy Movement as having come a long way since you founded Represent.Us in 2011? Do you feel the movement has significant momentum?

Silver: The advances the movement has made in the last four years have been incredible. This year was the first time a statewide initiative with public funding was approved by voters in 18 years. Our campaign represents the first time there has been an organized effort at a national scale to unify liberals and conservatives who both strongly support sweeping reforms to our democratic system. And, we are seeing more activity by a broader set of players--both liberal and conservative--all across the country tackling Citizens United, voting systems, voter registration, campaign finance, and other democracy reforms that are long overdue. This is a very exciting time to be a part of this burgeoning movement.

Eichen: Almost 20 years ago you led the campaign in Arizona for one of the first public financing systems in the United States. Are you more hopeful now than you were then that we can finally have a working democracy for all Americans?

Silver: Absolutely. In fact, I am more hopeful now than I have ever been in my life that there is a path to victory to fix our corrupt political system. South Dakota was a complete game-changer. Remember, two years after we won in Arizona, standalone public financing initiatives were beaten badly in Missouri and Oregon. The assumption at that point was that any state-based reform was dead on arrival. This year, we proved that wrong. We proved that we can win. I truly believe we will see a raft of new sweeping democracy reforms succeed at the ballot over the next few cycles that will redraw the political map and redefine functional democracy in America. Eventually, Washington D.C. will be forced to follow suit.

Eichen: Congratulations, Josh, and to all those at Represent.Us.

[This interview was conducted as research for an upcoming book with Frances Moore Lappé on the emerging Democracy Movement.]