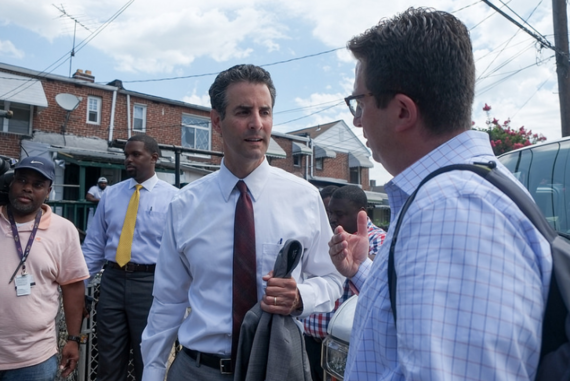 Photo: Courtesy of the Office of Congressman Sarbanes

Last April, as part of Democracy Spring the two of us marched from Philadelphia to D.C. with four game-changing demands for Congress: Get big money out of politics, ensure voting rights, improve voter registration, and reverse Supreme Court rulings that allow private wealth to defeat citizens' right to a meaningful political voice. We believe that a key reason for Trump's election is the anger of Americans who've felt voiceless because these popular demands remain unmet.

Although virtually ignored by corporate media, some in Congress did hear our voices--most notably Representative John Sarbanes (D-MD) who immediately collected roughly 100 Congressional signatures on a petition to hold hearings on our demands.

John Sarbanes is a hero to many, shining the light on the mother of all issues: democracy itself. Recently we felt honored to chat with him. Below is the second half of our conversation (see Part One here).

Frances Moore Lappé: Why has your focus been on empowering voters through your Government by the People Act rather than on a constitutional amendment to allow limits on spending in elections around which a lot of Americans have rallied? John Sarbanes: The constitutional amendment approach is tricky. I worry that it won't completely satisfy the demand for change people really feel we need, and that it can end up in some ways aggravating people's sense of frustration.

One issue is procedural: It's hard to get a constitutional amendment passed in this country. Even under the best circumstances, it would probably take ten years. We don't have that kind of time.

Another issue is that if you get a constitutional amendment ratified, more than likely it will not set limits on the amount of money flooding into our system. The amendment would simply give Congress the ability to regulate campaign finance. The fight over how to regulate the money would persist.

A third issue is that lawmakers' dependence on big money existed decades before Citizens United. Unlimited independent expenditures by individuals have long been protected under the jurisprudence of the Supreme Court and would continue to be so even if Citizens United was overturned.

Finally, a constitutional amendment would not change where the money comes from. The cost of running for office is so high that private, special-interest money has to be the source of the funding for campaigns. Where else can a candidate find the massive amount of money required to run for reelection every two years?

Adam Eichen: So then how do we change this?

Sarbanes: We have to create another place to which members of Congress and candidates can turn--where they can be competitive in their funding while not being reliant on special interests.

I see two approaches: containment, which is really meant to limit big donors through constitutional challenge--or empowerment, the approach I favor. Here's a metaphor I use most often to describe the difference:

Americans are sitting in the bleachers of their democracy right now. They are looking down on the field. One thing they can do is put a referee on the field, so the big money players down there have to play by a certain set of rules. So, if a candidate gets steroid injection from a super PAC, a referee can blow the whistle and say, "You are out of bounds and will be penalized." That's containment.

But putting a referee on the field doesn't make the Americans in the bleachers, who are currently spectators, into players. It doesn't give them power. 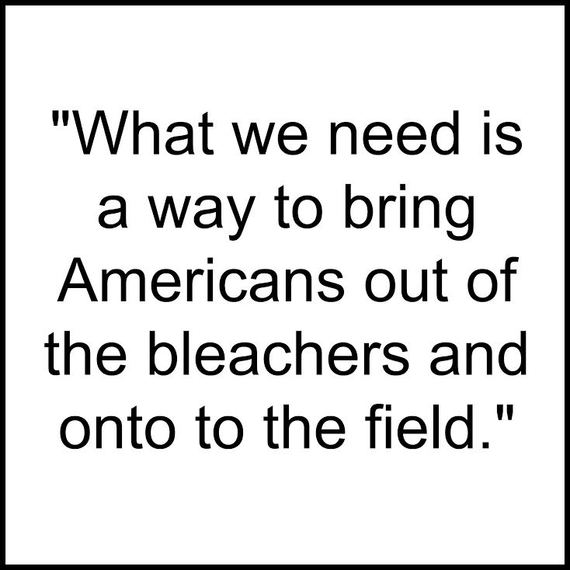 What we need is a way to bring Americans out of the bleachers and onto to the field, where they can be the power players and call the shots. If we are going to address the deep cynicism that has settled in across the whole political spectrum, we've got to figure out how to get people back on the field of their democracy.

But here's the thing: Americans are not going to come onto the field if they think they will just get knocked over. This is what the small-donor empowerment approach embodied in the Government by the People Act is all about. And we can pass it in Congress without getting tangled up in opposition from the Courts.

Lappé: Can you explain more about The Government By The People Act?

Sarbanes: The Government By The People act is very simple. It incentivizes small donations from people in one's constituency. First, every in-district, small money donation is matched by a rate of six to one. This means that a $10 donation becomes $70. Second, the bill gives every voter a $50 tax credit to make a contribution to a candidate's campaign. With these provisions, politicians can raise all their necessary funding using only small donations from the people they represent--not out-of-state special interests.

So that's the other benefit of the empowerment approach. If you can power your campaign by going to the people, and spending time with them, then you are just going to be better positioned to act in the interest of the broad public.

Yes, I support a constitutional amendment as well as transparency and disclosure. I believe we need FEC [Federal Elections Commission] reform, etc. But if we don't make changes that give everyday Americans the feeling that their voice is consequential, and is loud enough that candidates will hear them and want to come talk to them and spend time in their neighborhoods, then we're not solving the problem that's generating so much cynicism in our country.

The other benefit of this approach is that you get more candidates stepping into the arena who, right now, can't afford to. And, if you create a system which rewards them for going out and finding small donors and lifting them up, while being competitive, you are going to bring a whole new group of people into our politics and government. They will be more representative of the broad public, and, I think, would lead to better policy decisions.

For example, if you go up to K Street, whether you are Democrat or Republican, and the issue of Social Security eligibility comes up, chances are that most people in that room are going to say, "Well you know, people are living longer, they are healthier, and there is no real downside to increasing the retirement age for Social Security to 67 or 69."

Well, the problem with that? These folks may be living longer, but half of them have personal trainers, are playing squash every Friday morning, and are sitting at a desk job. But I guarantee if you find someone who has been lifting boxes for 25 years, and the issue of Social Security benefits comes up, they are going to tell you something different. And you are going to walk away with a better understanding of how we handle this issue than you would ever have had by spending time with a bunch of lobbyists in Washington.

Eichen: Are some politicians reluctant to vote for your small-donor empowerment measure for fear that it will hurt their chances at reelection?

Sarbanes: We looked at 2014 fundraising profiles of every member of the House and determined that nearly 80 percent, if they chose to participate in the system we put forward in our bill, would do as well or better under that system than they did in the last election. It shows that you can be competitive by turning toward the public and boosting the voice of everyday citizens.

Eichen: Thank you for your "empowerment approach." Undoubtedly, most Americans agree and want to get out of the bleachers and onto the field.