Last month, I was arrested at the US Capitol, along with more than 1300 other Americans in the largest civil disobedience action of the century.

The nonviolent protest, dubbed Democracy Spring, aimed to confront obstacles to democracy in the United States, including voter suppression and the outsized influence of big money in our political system. 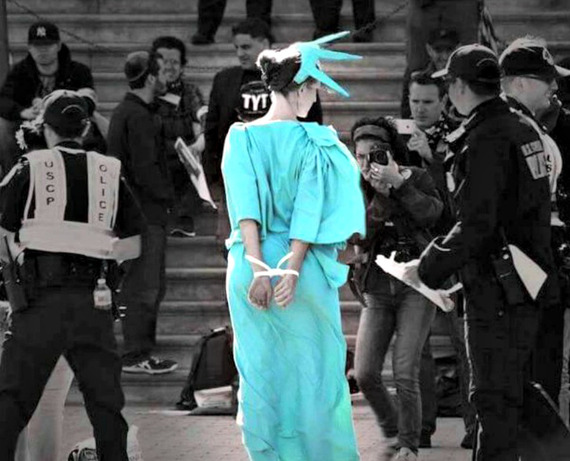 The week of action kicked off with a march from Philadelphia's Liberty Bell to the Freedom Bell in Washington D.C. There, marchers were joined by thousands of Americans from every state in the union. We converged on the US Capitol, where we followed the example of leaders from the voting rights to civil rights movements, sitting in en-masse. Our demand: that Congress take immediate action to end the corruption of big money in politics and ensure free and fair elections in which all people in this country have an equal voice.

Hundreds were arrested on the first day, and as the protests continued through the week as hundreds more people flocked to Washington, D.C. to be part of the actions. Our tactics varied. Many of us joined the mass sit-ins, while others locked themselves to the scaffolding in the Rotunda of the Capitol Building, chanting "Money ain't speech, corporations aren't people."

Over the course of 7 days, over 1300 people were arrested, making the protests not only the largest nonviolent civil disobedience action of the century, but the largest ever mass-arrest at the US Capitol complex. The protests were organized by a coalition of over 120 organizations, and were endorsed or attended by high-profile activists like Rosario Dawson, Mark Ruffalo, Ben and Jerry, and intellectuals like Lawrence Lessig and Noam Chomsky.

The issue of money in politics is one that resonates deeply with Americans across the political spectrum. Poll after poll shows that the vast majority of Americans (well over 80%) want fundamental change in the way the US funds elections.

Americans recognize that our voices are being drowned out by big money, leaving us politically powerless in our own democracy. When donors pour money into politics, they do it for a reason. We see the results of this donor influence nationally, from Big Oil-funded politicians refusing to acknowledge the science of climate change, to Wall Street-funded politicians disavowing financial regulation. Because of corruption and our unfair electoral system, state and local representatives are accountable to their big money donors, rather than their constituents--us. Through systemic disinvestment of power, the costs of corruption are offloaded onto the 99 percent-- and in particular, the working class and communities of color, who face largely inadequate, underfunded, and inhumane public services.

We risked arrest to demand that Congress listen to the People and take immediate action to create a democracy that works for all of us. Such a democracy would provide millions of disempowered voters with opportunities for meaningful participation in our political system. This, in turn, would enliven social movements and give our society more space to create progressive and meaningful change.

The effects of this historic protest are already being felt. In the days since the sit-in, over 100 members of Congress have joined the call for hearings to be held on Democracy Spring's demands: legislation that would immediately protect voting rights and bring about real campaign finance reform.

These Congress members are calling for support for existing bills which would create a public financing system for congressional elections, overturn Citizens United and other court decisions around campaign finance, and expand voting rights and empower marginalized voters, particularly low income Americans and voters of color.

Such reforms could be implemented immediately and provide an important pathway to free and fair elections in the coming months, but the goal of Democracy Spring goes beyond short-term legislation. We are building a sustained movement that will challenge corporate influence over the decisions that govern our lives, and end the legalized corruption of big money in politics. The American public stands squarely behind these ideals, and in the coming years, a path to victory around money in politics is within reach.

Democracy Spring participants are now calling on elected officials to sign the Equal Voice for All Declaration, which states: "Our government should be free from the corrupting influence of big money in politics and solely dependent upon the People. I declare my support for pro-democracy, anti-corruption reforms, including voting rights protections, citizen-funded elections, and a constitutional amendment to overturn Citizens United."

With overwhelming nationwide support, this growing movement offers candidates and elected officials a clear choice: either side with the people and fight for meaningful pro-democracy reforms that would give us a "one person, one vote" democracy--or stand with a corrupt political establishment that is dominated by big money and voter suppression.

Demonstrators made history at the Capitol, but have their eyes on a bigger prize. We intend to make the 2016 election a referendum on whether we have a democracy that serves the people, or a plutocracy that panders to corporate and big money interests. The outpouring of political endorsements and grassroots participation for this cause foreshadows that in the coming months, there will be a growing political cost for those who fail to listen to the overwhelming demand for fair and functional democracy.