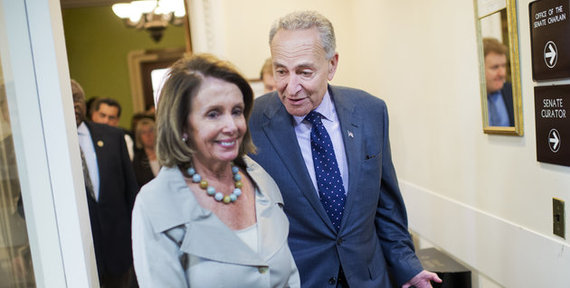 What does a professional sports team do after 6 straight losing seasons? Among other things, it usually fires the coach and looks for new blood, new leadership, and new strategies.

But not if you're the minority House and Senate democratic leadership... Or the Politburo of the Soviet Communist Party shortly before the collapse of communism.

Instead, the failed, and increasingly geriatric leadership holds onto its fading power with increasing tenacity.

Schumer and Pelosi will be the most prominent public faces of the Democratic Party for the next four years.

Does that get you fired up and ready to go?

The top three House Democratic leaders are 76 (Pelosi), 77 (Steny Hoyer) and 76 (Jim Clyburn). The average age of the Democratic House leadership is 76. That's even older than the 70-year old average of Soviet Politburo members in the age of Brezhnev, shortly before the collapse of the Soviet Union.

Pelosi has served in the House for 35 years, Hoyer for 35 years, and Clyburn for 23 years for an average tenure of 31 years. Pelosi and Hoyer have led the House Democrats for the past 14 years.

I'm not saying that age is necessarily a disqualifier for political leadership. After all, the most dynamic Democrats in the Senate are 67-year-old Elizabeth Warren and 74-year-old Bernie Sanders.

But the democratic congressional leadership isn't just old. It's an abject failure. Democrats have lost one of every five House seats they controlled in 2009. And they've lost 12 Senate seats since then.

And the national Democratic leadership did much to make Trump's victory possible. They cleared the field to insure that the least popular and most flawed Democratic nominee in history, Hillary Clinton, would be the Democratic standard bearer. They provided no viable economic message to the voters. If Democratic leaders want to know why Trump is president-elect, and Republicans control all three branches of government, they should look in the mirror.

Chuck Schumer and Nancy Pelosi are even worse faces for the Democratic Party than Hillary Clinton. Neither has any credibility as agents of change, as opposed to servants of the status quo. Their power in the Democratic Caucus is predicated on their ability to raise tons of money from moneyed interests. And Chuck Schumer is essentially the senator from Wall Street.

Rather than put up a wall of resistance to the quasi-fascist Trump and the extreme right-wing Republican Congressional leadership, as Republicans did to President Obama, Schumer is already talking about how to compromise.

Even before the election, Schumer was close to a deal with Paul Ryan to trade infrastructure spending for both a one-time tax break for corporations to repatriate off-shore profits for a fraction of the normal 35% corporate tax, as well as to substantially cut all corporate taxes going forward. Schumer is now talking about consummating that deal during Trump's first 100 days in office.

It looks like a bad deal for Democrats and for American workers and a great deal for the oligarchy. The amount in corporate tax savings is likely to dwarf the amount spent on infrastructure (much of it in the form of corporate tax breaks and privatization) and the corporate tax cuts are likely to go to executive salaries, shareholder dividends, and corporate takeovers rather than to creating very many new jobs.

Moreover, such a deal would be a big political win for Trump and Congressional Republicans, and do nothing for the Democratic opposition.

Democrats need progressive populism to fight back against Trump's right-wing populism. But it's not going to come from the sclerotic Democratic congressional leadership.

And already, the same establishment Democratic forces are who cleared the field for Hillary's losing candidacy and waging a stealth campaign to undermine progressive Keith Ellison's campaign to be Chair of the Democratic National Committee.

Establishment Democrats had no problem with the DNC chair simultaneously serving in Congress when the post was held by corporate neo-liberals Sen. Tim Kaine and Rep. Debbie Wasserman Schultz. But suddenly when the potential chair is a progressive like Ellison, serving in Congress has become a deal-breaker (even though Ellison has said he would consider giving up his Congressional seat, if necessary.) And the anti-Ellison forces have started a whisper campaign to leak out-of-context statements from Ellison that falsely make it seem that he's anti-Israel. It's appears that the Democratic establishment would rather lose with a neoliberal than win with a progressive populist.

The Democrats need new faces, new leadership, and a new progressive populist direction. It's not going to come from the current leadership.

But if it doesn't emerge from somewhere, Democrats -- who only a few months ago were talking about becoming a permanent majority -- may be looking at being in the minority for a long time, as Trump and the Republicans roll back the New Deal and the Great Society and turn the country into a kleptocracy.