Wisconsin's Election Day went pretty much as expected if you were following the prediction markets.

Cruz' slightly stronger-than-expected victory affected Trump's probability of winning the Republican nomination; he fell from 54 percent to 53 percent. If that number still seems high for someone who just lost Wisconsin in a landslide, post-Wisconsin Trump is now favored in New York at 92 percent, and he is still the favorite in every primary the following week on April 26: Connecticut, Delaware, Maryland, Pennsylvania, and Rhode Island.

As no one other than Trump can win on the first ballot, another way to look at those numbers is that Cruz has a 40 percent chance, Trump has a 35 percent chance, Kasich has a 13 percent chance, and Ryan has a 10 percent chance to win, conditional on a second ballot (which is 75 percent likely to happen). Of course, Kasich and Ryan are only eligible to win if the rules committee changes the rules to let in candidates that have not won the majority of delegates in eight or more contests; Cruz is fighting really hard to keep that rule in place.

The Democratic nomination also moved a little on the strength of Sanders' stronger-than-expected showing. Clinton dropped from 88 percent to 87 percent likelihood of winning the nomination. Like Trump, Clinton is expected to go on a tear following a rough patch of states. She is up to 76 percent likely to win New York on April 19, and expected to sweep four of the five April 26 elections (Sanders is now favored in Rhode Island). 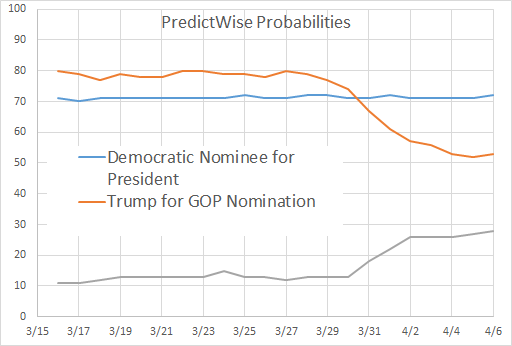 There is one more probability that matters, and in many ways it is the only probability that matters: the likelihood of the eventual Democratic nominee beating the eventual Republican nominee in the general election. This number has held incredibly steady at 71-72 percent since March 16. This may seem surprising considering that Trump has fallen from 80 percent to 53 percent likely to be the nominee and Cruz has risen from just 11 percent to 29 percent. But prior to Trump's recent troubles, the market viewed Cruz as slightly less likely to win the general election, conditional on winning the Republican nomination. That is now equalized as Trump's general election prospects would dampen if he limps into the nomination. Thus, swapping Cruz for Trump does not improve the Republican Party's chances of taking the White House in November.

Method Note: There is a three step process for aggregating the prediction market data on PredictWise. Step 1: construct prices from the back/sell, lay/bid, and last transaction odd/price in the order book. I always take the average of the highest price traders are willing to buy a marginal share and the lowest price people are willing to sell a marginal share, unless the differential is too large or does not exist. Step 2: correct for historical bias and increased uncertainty in constructed prices near $0 or $1. I raise all of the constructed prices to a pre-set value depending on the domain. Step 3: I normalize the probabilities to equal 100% for any mutually exclusive set of outcomes.