Last week, I argued that a reported “jump” for Democrats in Gallup’s weekly tracking of the national generic U.S. House ballot was most likely a statistical blip. I boldly predicted that “more data” this week would “likely settle the issue.” That latter assertion turned out to be wrong, as the issue isn’t settled, but I’m still not convinced that we’re seeing a real shift in voter preferences nationally.

Let’s review: Generally speaking, the generic House ballot is a poll question that asks registered or likely voters whether they would support "the Democratic Party's candidate or the Republican Party's candidate" in their congressional district if the election were held today. Since March, Gallup has released a weekly result based on roughly 1,600 interviews of registered voters that has averaged a 46% to 46% dead heat, but mostly varied within the expected margin-of-error range of plus or minus 3%. 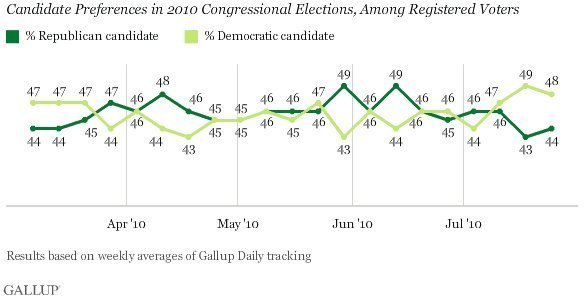 Last week’s Gallup result showed Democrats with a six-point lead (49% to 43%), a result that I argued was likely the sort of random statistical “blip” we should expect from time to time with this sort of tracking survey. This week, Gallup reported a Democratic margin is a slightly narrower four points (48% to 44%), but Gallup’s analysis noted that it “marks the second straight week in which Democrats have held an edge of at least four percentage points” and “the first time either party has held an advantage of that size for two consecutive weeks” in Gallup’s tracking.

So this week’s data doesn’t resolve things. As Charlie Cook writes today, these results mark “one of those periods of uncertainty” where those of us who watch polls closely are unsure whether the results “signal a key turning point in public opinion…just a hiccup, a passing blip…[or] an outlier poll, a statistical anomaly that is the political equivalent of a false positive medical test.”

I’m still dubious that the we are seeing a real change in voter preferences. First, while this week’s Gallup’s numbers do tend to confirm last week’s upward turn, they are also statistically consistent with the 46%-to-46% result that Gallup has shown on average since March. Combining samples for the last two weeks might yield a statistically significant difference from the average, although it would be close. 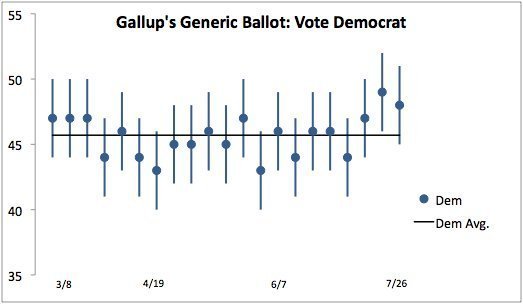 Second, none of the other pollsters that fielded national media surveys in recent weeks confirm a “jump” in the Democratic direction since the passage of financial reform legislation on July 16. While these surveys have “house effects” that produce different results over time, we can look at trends for individual pollsters. Six (Ipsos, Rasmussen, CNN/ORC and Zogby) show nominal shifts in the Republican direction as compared to their average result earlier this year, and one (YouGov/Polimetrix) shows no change. Only Gallup shows a shift to the Democrats.

Third, Charlie Cook took the next logical step and informally “canvassed several pollsters who see large quantities of data from around the country.” These are the campaign consultants that have been doing benchmark and tracking surveys for their clients over the summer. “None,” he writes, “seems to have detected any shifts in the past two weeks.”

That said, I am not arguing that we ignore the Gallup data. Aside from its well-deserved reputation, Gallup is also the only organization polling on the generic ballot in recent weeks which interviews Americans on their landline and cellphones. It would be surprising for the cellphone interviewing to make that big a difference, but we can’t rule that possibility out.

So, as my friend Charlie Cook counsels, we need to “sit tight” and wait for more data.