(The following piece was inspired by a provocative essay written by the late Edward C. Banfield in the April 1982 issue of Harper's Magazine, "Art Versus Collectibles - Why Museums Should be Filled with Fakes." Banfield was a professor at Harvard, not of art, but of government. The art world hated his proposals.) 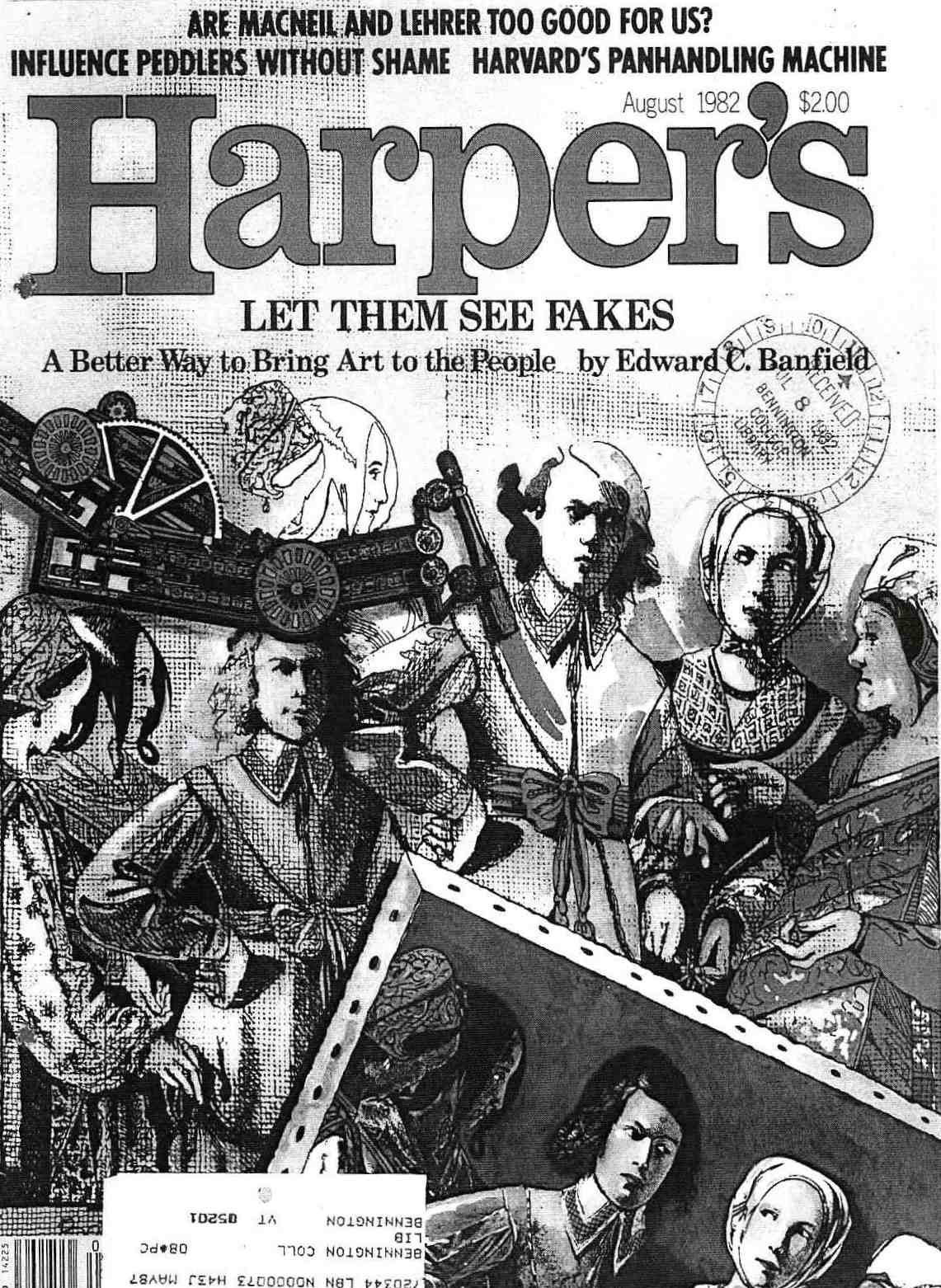 If any form of culture merits the opprobrium of elitist, it is the visual arts. Works of art are spread around the world, are priced out of sight, and many are in private hands, rarely or never seen by the public.

A work of art that is housed in a museum can only be seen by physically visiting the museum, then hoping it is on display - most museums show only a small fraction of their works - and then often coping with crowds to actually get a good view of the piece (which increasingly is protected from vandals by glass).

Let's say that I want to see Las Meninas, the great Velasquez masterpiece in the Prado. I have to get on a plane and fly to Madrid to see it (as Donna and I did six years ago). The Mona Lisa? Hop back to the Louvre in Paris. Seurat's A Sunday on La Grande Jatte? On to Chicago's Art Institute.

Let's consider further Las Meninas. One of the world's finest works of art, or maybe just the finest Velasquez, or surely a really fine painting - how many people actually get to see it? 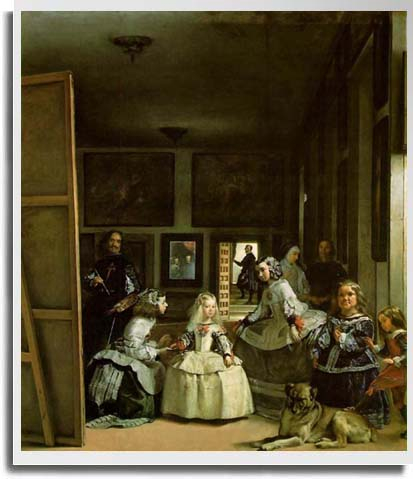 The answer is, not many. Last year, 2.6 million people visited El Prado, and assume that all of them viewed Las Meninas. Perhaps a half-million were from the United States (surely an overestimate). A tiny percent of our population.

This means that only a trivial number of Americans have or will see this painting, even over the course of decades. It's too far away, it's too expensive, and it takes too much time. And surely repeat visits are much more infrequent.

Contrast this experience with watching a Mozart opera. We don't have to travel to Salzburg; we can enjoy a great musical experience without traveling overseas, or traveling anywhere. We can hear a live performance, listen to a CD, watch a DVD or perhaps go see a Met Opera HD telecast to our local cinema. (This year, more people will see Met operas in movie theaters than in the opera house itself.)

And here is the basic difference. Music is reproduced -- by orchestras, singers, recordings, telecasts. Art, on the other hand, is proscribed from being reproduced, or at least from being exactly reproduced. Only shoddy reproductions are allowed by owners, by museums and by the law. You can buy reproductions in museum shops - and they certainly encourage you to do so - but they are purposely not very true to the originals. As Prof. Banfield points out, "The position of the art world is that only bad reproductions are good."

Exact reproductions in art are called forgeries. Yet in music, the higher the quality of a performance, the more the adulation. As Banfield writes: "Cultural commentators apply a curious double standard to the visual arts and music. People who sneer at a very good reproduction of a painting will praise a far inferior reproduction of a symphony."

So, the best music in the world performed by the best performers can be easily and inexpensively enjoyed and owned by anyone anywhere. Not so in the visual arts.

Why this difference? In fine art, there are two principal interests: economic and aesthetic. Today, we are witnessing the economic value of top works of art increase dramatically. When the total supply of a work consists of a single entity, and the number of interested owners is many, the price clearly appreciates.

The aesthetic experience has nothing to do with the economic interest; it is entirely separate.
Suppose that a work of art could be reproduced exactly. By exactly, I mean that the original and the copy could not be distinguished except by the most sophisticated scientific instruments. Would the viewer of Las Meninas The Copy have a different aesthetic experience from the one viewing Las Meninas the Original if he were not told which was which? I posit no; the experience would be the same. I can imagine that if the viewer indeed knew which was which, the outcome might be affected because of a widely assumed correlation of monetary value with artistic value.

This postulation that exact copies have an equal aesthetic value with the original is, of course, heresy in the art world, where the cult of the original dominates. Banfield quotes noted art critic John Hughes: "Even the most perfect replication is intrinsically dead, like a stuffed trout."

That said, is creating an exact copy even in the realm of possibility? The answer is yes. You can start with Hans van Meegeren, the Dutch forger who successfully duped everyone with the six "Vermeers" that he created. Until he confessed in 1945 that they were forgeries, no one was the wiser.

Well, there aren't that many forgers around with the talent (or boldness) of van Meegeren, so exact reproductions are unlikely to emerge from human hands. But with the advent of new technology, it is now possible to create copies that are of a quality where the aesthetic experience equals that of the original. Ironically, the scientific world's most sophisticated technology is necessary to root out fakes, and equally sophisticated - but different -- technology is what now makes possible exact copies, or "fakes."

I've personally only experienced exact reproductions once. It was a few years ago during a visit to the Palm Springs home of the Annenberg estate.

When her husband Walter Annenberg died in 2002, the art collection that he and his wife had amassed of 53 paintings, drawings and watercolors by 18 artists were donated to the Metropolitan Museum in New York. The trove included works by Monet, Renoir, Cezanne, Van Gogh, Gauguin, Picasso, Braque, Toulouse-Lautrec, Seurat, Bonnard, Vuillard, and Matisse.

As part of the terms of the gift, Mrs. Annenberg received framed copies of each of the donated works. And not your run-of-the-mill copies, but astonishing reproductions made possible by using the latest digital techniques. Today, these works hang in place of the originals in Palm Springs, and they are spectacular.

But don't take just my word for it. When Philippe de Montebello, director of the Met, visited her home in Palm Springs to see the installation, he said to Mrs. Annenberg, "Lee, who has the originals, you or the Met?" (Perhaps in jest, but not apocryphal.)

Today, museums are being priced out of the art-acquisition market by the soaring prices for works by the top artists. Also, insurance and security costs have skyrocketed. All these factors make loans of art to other museums that much more expensive.

So consider the following scenario: the museum makes an an exact reproduction of one of its top showpieces, sells the original for millions of dollars (to a collector who must own the original), and exhibits the exact copy. The museum-goer receives the same aesthetic experience while the museum uses the proceeds for a variety of other purposes to fulfill its mission.

Or consider this: The museum sells an original (perhaps at a lower price), but makes 100 exact copies, and sells each for a modest amount to 100 other museums around the world. Now children, students, art lovers everywhere can share in this exhilarating visual experience without spending thousand of dollars on airline and hotel tickets.

Will any of this ever happen? Probably not. But it should. Fine art should be as accessible to everyone as is fine music. And great literature. And all the other components of what we call "culture." 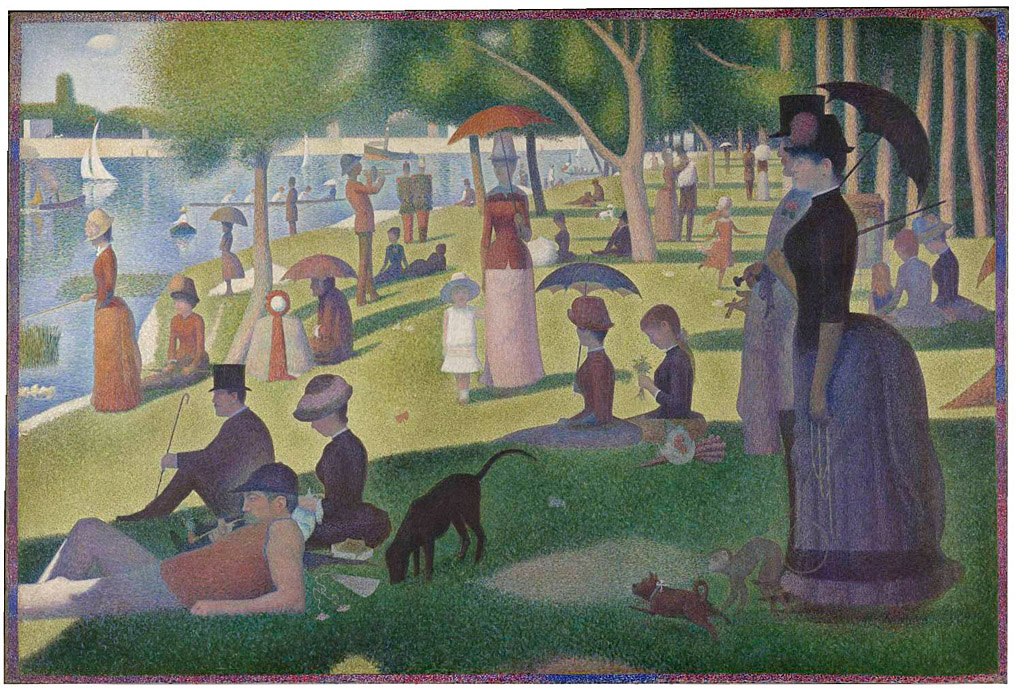 Imagine: An exact copy A Sunday on La Grande Jatte in every museum in the world.