Democrats got quite a quad workout during Barack Obama's State of the Union address on Tuesday night. The speech, lasting under 90 minutes, included number of standing ovations by members of the President's party.

Maybe that was enough to tucker out Secretary of Homeland Security Janet Napolitano, seen here sitting next to Chief of Staff Rahm Emanuel: 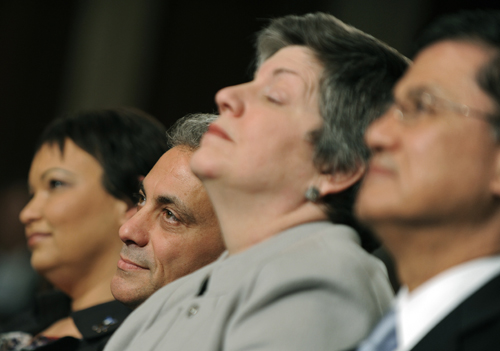 Not the best place to join the HuffPost Sleep Challenge, considering the middle of the aisle was jammed with photographers.

Senate Majority Leader Harry Reid also seemed a little sleepy, as he was caught yawning while other people were applauding.

To learn more about the right way to sleep your way to the top, click here.

Voting Made Easy
Register to vote and apply for an absentee ballot today
Register now
More:
healthy livingSOTUHarry Reid State of the UnionVideo
Newsletter Sign Up
The essential guide to taking care of your mind and body
Subscribe to HuffPost’s wellness email
Successfully Subscribed!
Wellness delivered to your inbox