Over the past few weeks, top Democratic Party strategists have been passed a chart by a concerned, well-respected operative underscoring the daunting task they face in the 2010 elections.

On the left hand side of the chart is a list of ten Republican aligned institutions, ranging from the U.S. Chamber of Commerce to the Family Research Council. Next to it is a column listing the amount of money each group has pledged to spend by Election Day. A third column on the right details what those groups actually spent in 2008 on federal elections.

The number at the bottom delivers the key message. If their pledges are fulfilled, these ten groups will unleash more than $200 million in election-focused spending -- roughly $37 million more than every single independent group spent on the 2008 presidential campaign combined. This time around, almost every single penny will be going to Republican candidates or causes. 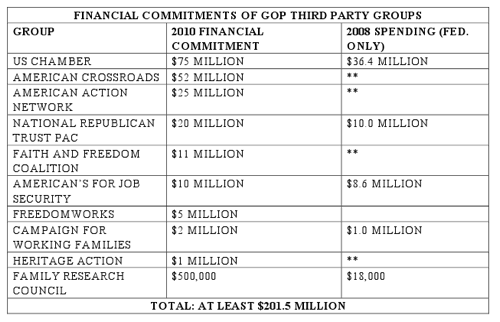 (Update: A Democratic operative makes the case that the total could rise to roughly $300 million if it includes additional pledges for campaign spending from Americans for Prosperity, promising $45 million, the Club for Growth, $24 million, the National Rifle Association, $20 million, and the Susan B. Anthony List, $6 million)

Democrats who received the chart -- which include staff at both congressional committees, the major unions, and many of the most respected campaign hands in the party -- have admitted to greeting it with nervous expletives. It has been passed along to big fundraisers in hopes that they will be compelled to open up their checkbooks.

One top-ranking Democratic operative involved in crafting campaign strategy said he "wouldn't be surprised" if outside groups on the Republican side "outspend us four-to-one." Another top official at a campaign committee called it "one hell of a wake-up call to the left."

"Despite accomplishing much of the check list on the progressive agenda," the official added, "they risk losing it all unless they come together and put their money on the table."

Special interest groups have long tried (with some success) to tip the scales of political election results. But what seems in store for 2010 is historic in nature. The chart was updated late last week after it was reported that the Chamber would make a $75 million commitment to the upcoming elections -- more than twice the amount it had spent in the 2008 cycle (which was then a high-water mark).

The business lobby's expenditures -- done almost exclusively for the benefit of Republican candidates -- would alone have a profound impact on races across the country. But the Chamber is being accompanied by a host of other, ideologically-aligned groups promising to empty similarly deep pockets. American Crossroads, the outlet run by former Bush strategist Karl Rove, has pledged $52 million in expenditures. American Action Network, which is headed by a host of high-ranking GOPers, is promising another $25 million.

"In the context or recent history, it is unprecedented, but speaks to how much is at stake in Washington: power, money and access will be awarded to the winning party," said Craig Shirley, a biographer of Ronald Reagan and Newt Gingrich and a longtime adviser to conservatives. "Everyone in America now has some sort of stake or interest in the affairs of the national government."

Can the money be used effectively? The traditional conduits for cash are the campaign committees which recruit donors through promises of organization, coherent messaging, and effective leadership. But as Shirley notes, activists may end up circumventing the Republican National Committee out of concerns about the competency of its chairman, Michael Steele. The National Republican Senatorial Committee hasn't been treated with similar skepticism by the party's base, but it has only $18 million cash on hand at this point in time.

In interviews with the Huffington Post, several high-ranking Republicans expressed confidence that the outside groups could effectively fill the void the RNC (and, to a lesser extent, the NRSC) was creating. Leadership at these institutions, one operative said, are all veterans of recent high-stakes campaigns, if not well respect tacticians in their own right. Federal law does not, moreover, explicitly prohibit them from coordinating messaging or target lists. They simply can't do so with the campaign committees.

As for the capacity of these groups to actually raise the cash, that too is debatable. It's one thing to promise $52 million in expenditures, as Rove has. It's another thing to deliver. American Crossroads was mocked for raising practically nothing in May 2010, then returned in June claiming $8.5 million in new donations.

Democrats, while predicting that the $200 million objective likely won't be reached, are prepping for an avalanche nonetheless. "It is just one more chess piece on the board," said J.B. Poersch, executive director of the Democratic Senatorial Campaign Committee. "Today, I assume, at least the Chamber's money is real because it was real before. If they say they are going to spend $75 million, I have to assume it is real."

"There's no doubt the Bush boys and big corporate interests -- those who lost the most in the last two years -- are going to try to buy their way back in to power," said Hari Sevugan, press secretary for the DNC. "We are confident that Democrats, as well independents, who don't want that to happen, will put up the resources to ensure that it doesn't."

That confidence is far from universally shared. While it's anticipated that both parties will be able to maintain approximate parity in the amount of money they can spend on congressional races, top strategists are resigned to the likelihood that Democratic interest groups won't match their Republican counterparts. So far this cycle, the activist base -- personified by groups like MoveOn.org -- has been motivated by issue-advocacy and primary challenges, not the Democratic Party's well being.

The major unions are pledging massive resources for the 2010 elections. To this point, they've outspent corporate groups. But their priorities aren't necessarily in line with the campaign committees and the White House. And in interviews with the Huffington Post, top officials held no illusions that they can go cent-for-cent with the Chamber, let alone the nine other Republican-leaning groups.

"Typically, labor unions are outspent by corps around 3 to 1 on elections," said the SEIU's national political director Jon Youngdahl. "We fear that due to Citizens United [the Supreme Court case allowing unlimited spending on campaigns] those numbers are only going to grow. It looks like these are the first signs of that growth."

"Will the labor movement be able to match corporate money? No. We never have been and never will," said Karen Ackerman, political director of the AFL-CIO. "But that is not the strength of the labor movement. Our greatest strength is union members and their families."

Faced with a potentially deep financial deficit, grumbling has started to intensify. In private, White House officials are accusing unions of wasting money on fruitless primary challenges; congressional officials are accusing the White House of not doing enough fundraising on their behalf (Obama has done 49 events so far, including two on Thursday, raising over $46 million dollars for candidates and committees); and union officials are blaming congressional Democrats for not passing an agenda that could motivate voters.

It's a far cry from two years ago, when the Obama presidential campaign had a unifying influence on the entire party. The growing concern among strategists is that it could end up producing a self-fulfilling prophesy in which each faction -- convinced about forthcoming midterm losses and skeptical of each other -- can't generate a comprehensive counter-campaign. The one glimmer of hope is that the GOP, even with its deep pockets, could stumble.

"Nature hates a vacuum," said Douglas MacKinnon, a longtime Republican hand and former spokesman for Senator Bob Dole. "And right now the country is taking it out on Democrats to a certain extent. But the country is also looking to Republicans for leadership... and what they are seeing is next to silence because the GOP is just waiting for democrats to self-destruct. Some of the air is coming out of the Republican balloon because they are not stepping into that vacuum or offering solution."