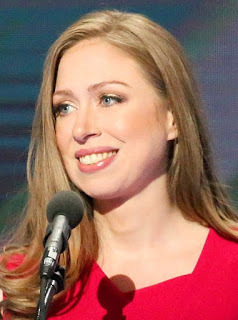 One of the democratic platform issues is the repeal of the Citizen's United verdict which allows for uncontrolled campaign spending by super PACs. In other words those with bucks continue to have undo influence. But shouldn't we be thankful for the super PACs which have produced all these exemplary children. No one likes the candidates in this election, but everyone is talking about the children. And it's apparent that one great way to produce wonderful children is to be a presidential hopeful. Even though it's clear Trump, who has been using his own dough, is not dependent on super PACs, he's one of many candidates notable for his great kids. You have the two Obama girls, Chelsea, Ivanka, Tiffany, the Trump boys and going further back Ron Reagan and Caroline Kennedy. Even Dr. Spock, a noted liberal, who's Baby and Child Care is still a bible of child raising and a noted liberal, might have given his blessing to Citizen's United. Let's imagine that we expand rather than diminish the power of the super PACs. The result will be that more and more people will run for president. The problems of dysfunctional families, which include but are not limited to divorce and drug and alcohol addiction, will all disappear. A family with a parent running for president is more likely to produce focused and well-adjusted kids, who thrive in school and later in the workplace.