WASHINGTON -- While Republican Senate candidates are nearly unanimous in their desire to either ignore or deny the existence of global warming, the major Democratic Senate candidates this cycle are more of a mixed bag.

Those hailing from more traditionally Democratic states fully embrace the need to confront the issue. They include Sens. Al Franken (Minn.), Ed Markey (Mass.), Cory Booker (N.J.) and Jeff Merkley (Ore.). But in swing states some candidates also discuss the issue on their websites, such as Sen. Jeanne Shaheen of New Hampshire, whose website touts the senator’s efforts to “confront the global threat of climate change.”

Other Democrats don’t address the issue quite as directly. Rep. Gary Peters, who is running for Michigan's open Senate seat, touts that he has “fought for clean air and clean water in Michigan communities” without mentioning “climate change.” Rep. Bruce Braley, the Democratic candidate for Iowa's open Senate seat, also does not refer directly to climate change on his campaign website, but he discusses his support for the Renewable Fuel Standard as a way to make “clean energy progress.”

And then there is Michelle Nunn, the Democratic Senate candidate running in Republican-leaning Georgia. She goes squarely at the matter on her website: “We must continue to decrease our reliance on foreign oil and confront the challenges of climate change.” 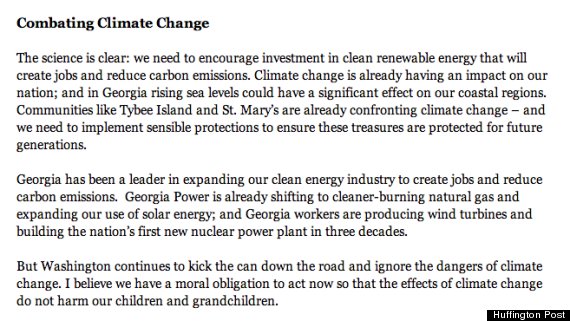 Some Democratic Senate Candidates Want To Talk About Climate; Others, Not So Much
Senate Seats Up For Grabs In 2014