While most Americans continue to feel positively toward Israel, a Gallup poll released Monday shows that Democrats have experienced a significant decline in sympathy in the past year.

These numbers are almost unchanged from a Gallup poll conducted one year ago. A closer look across party lines, however, reveals that fewer Democrats feel warmly toward Israel than did at this time last year. Democrats' favorable ratings for Israel have dropped 14 percentage points from one year ago, from 74 percent to 60 percent. Their sympathy toward Israel has declined from 58 percent last year to 48 percent today, the lowest share among Democrats since 2010.

Republicans, on the other hand, have grown in sympathy toward Israel, reaching 83 percent in the most recent poll, a slight uptick from last year. 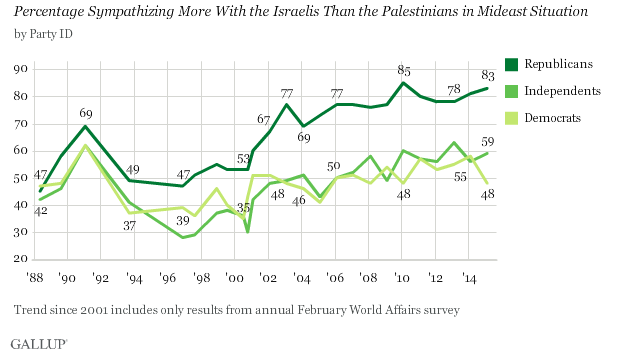 Since 2000, support for Israel has been high among both Democrats and Republicans, with Republicans growing especially sympathetic after the Sept. 11 terrorist attacks. In the past 15 years, the percentage of Americans expressing more sympathy for the Israelis has risen 30 points among Republicans and 13 points among Democrats.

Gallup's Lydia Saad suggests that the recent decline among Democrats is related to the growing tension between President Barack Obama and Israeli Prime Minister Benjamin Netanyahu. Tensions reached a peak in January when Republicans invited Netanyahu to address Congress without the White House's knowledge, defying protocol.

Netanyahu will deliver a speech to Congress on March 3 in which he is expected to argue against allowing Iran any nuclear weapons. The visit poses a problem to Obama and to Democrats, given that the U.S. is currently negotiating with Iran on this issue.

In addition, Netanyahu's visit will come just two weeks before Israel's election, in spite of a White House convention of not meeting with foreign heads of state or candidates near their elections, lest the U.S. create the impression of influencing the vote in another country. Obama has said he will not meet with Netanyahu, and several Democrats have said they will not attend the speech.

The Gallup poll surveyed 837 adults using live interviewers to reach both landlines and cell phones, and was conducted Feb. 8-11, 2015.

GOP Senator Says He May Need Part Of His Finger Amputated