WASHINGTON -- Republican Party committees and outside groups shared polling data over Twitter during the 2014 elections, according to a CNN report on Monday. The purpose was to circumvent federal anti-coordination rules -- and the practice appeared to be part of a growing bipartisan effort to get around those rules by posting information in public.

While those Republican accounts have garnered the attention since the CNN report, they were not the first use of Twitter by a party committee to hide coordination in plain sight.

In 2012, the Democratic Party shared information about advertising buys through a seemingly unconnected Twitter account called AdBuyDetails. This account, which posted tweets from Aug. 31 until Oct. 23, 2012, sent out data on ad buys made by Democratic House candidates in tight races across the country.

The purpose of the account, according to a source with knowledge of its creation, was to make that information public and thereby get around restrictions on information access built into an internal app used by top Democratic Party officials to share crucial campaign data.

The data-sharing app had built-in restrictions to prevent the dissemination of private information, like the ad buy data, with certain arms of the party committees. Specifically, the restrictions applied to the independent expenditure arm of the Democratic Congressional Campaign Committee, which is barred from sharing the party's conversations with candidates. This arm of the DCCC was legally not allowed to see the private advertising data collected by the DCCC or the Democratic National Committee.

But once the data were available on a public Twitter account, the information could be freely shared over the app with the DCCC's independent expenditure arm. It is not clear whether that group ever actually accessed the data. Since the ad buy information was public on Twitter, it could also be viewed by super PACs and nonprofits planning where to spend their money. 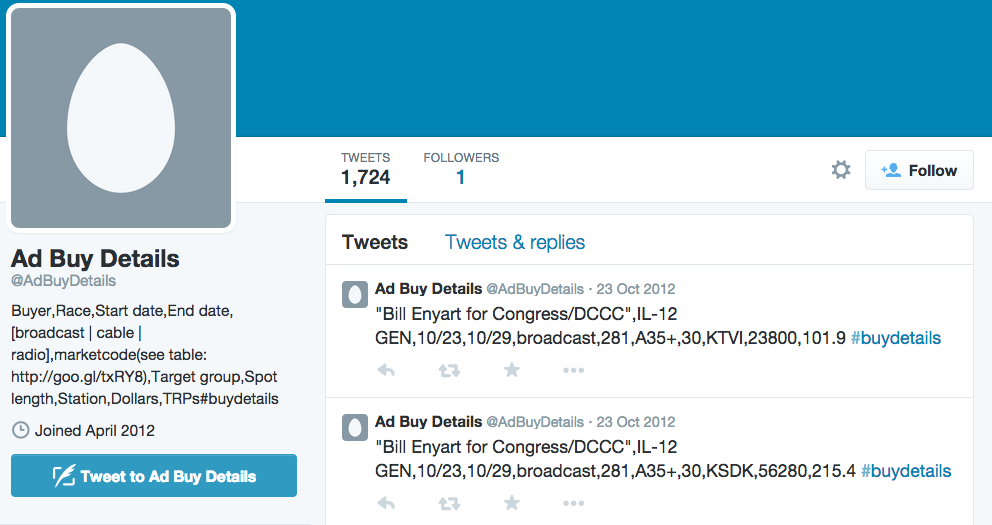 Asked about AdBuyDetails, DCCC communications director Emily Bittner said in an email, "This account has been dormant for two years. As you can see from the account, the information is publicly available facts about TV buys and allows any member of the public to read and understand it."

She emphasized that the account simply aggregated already publicly available information -- television ad buy data -- to point out a difference between what AdBuyDetails was doing and the GOP's Twitter dissemination of private polling numbers.

A Democratic National Committee spokesman merely noted that it wasn't a DNC account.

The similarities between the 2012 Democratic effort and the Republican Twitter accounts this year -- the coded language and the lack of disclaimer on who is behind the account -- are striking. There is one difference that could prove crucial, however, in determining whether anybody technically crossed the coordination line.

"The decoder key seems critical to understand what was on the Twitter feed," Paul S. Ryan, a lawyer at the campaign finance watchdog Campaign Legal Center, said. "Arguably their lawyers might say all of the information was made available on the Twitter feed."

Candidates and party committees are banned from privately coordinating the content of their messages and the conduct of their strategy with outside groups. But there is a critical exception provided in the anti-coordination rules: "if the information material to the creation, production, or distribution of the communication was obtained from a publicly available source." The publicly available decoder key might let the Democrats' tweets slip through that exception.

Ryan argued that the lack of a public decoder key on the Republican accounts indicated there was behind-the-scenes sharing of the key.

But he also said, "Both instances are worth investigation." The Democratic Party's inclusion of a decoder key, he said, "doesn't mean conversations didn't occur" between outside groups and the party providing the information.

The anti-coordination rules are "sadly murky," according to a tweet from Ann Ravel, vice chair of the Federal Election Commission, in response to Monday's CNN report.

The existence of rules forbidding coordination was at the heart of the Supreme Court's 2010 Citizens United ruling. This decision allows corporations, unions and, ultimately, individuals to spend unlimited sums on elections so long as they remain independent from the candidates and parties they seek to support.

The Citizens United ruling was famously determined by Justice Anthony Kennedy's argument that independent expenditures, since they are independent of the candidates and the parties, "do not give rise to corruption or the appearance of corruption." That conclusion, in turn, rests heavily on a key passage in the Supreme Court's 1976 Buckley v. Valeo decision: "The absence of prearrangement and coordination ... alleviates the danger that expenditures will be given as a quid pro quo for improper commitments from the candidate."

But in the real world, there are efforts across the board to evade the coordination rules, which are scarcely enforced by the FEC.

"Both the information about the Republican Party Twitter feed and Democratic Party Twitter feed makes clear the Supreme Court was either disingenuous or naive that all of this money would be spent in a meaningful way that is separate from the candidates and parties," Ryan said.

Beyond the Twitter accounts, the evasion of coordination limits through the public dissemination exception was evident in 2012 and endemic in 2014.

Campaigns posted b-roll footage of candidates' shaking hands, doing work and appearing down-to-earth for outside groups to reuse in their ads. Sen. Jeanne Shaheen (D-N.H.) posted an entire suggested advertising script to her campaign website. GOP candidate Thom Tillis, who defeated Sen. Kay Hagan (D-N.C.) in the most expensive Senate race in history, posted an entire strategy document online. Party committees have also posted opposition research and tracking footage of candidates for others to use.

Outside groups focused on particular candidates are often staffed by former employees of those candidates. They also share consultants with campaigns and data with party committees.

Elected officials like President Barack Obama, Sen. Harry Reid (D-Nev.) and House Speaker John Boehner (R-Ohio) have appeared at super PAC donor meetings. Other candidates have attended donor summits run by outside groups to sell themselves as investments with growth potential. And family and friends fund the super PACs dedicated solely to electing their favored candidates.

Barring a strong action by the FEC that nobody currently expects, the 2016 presidential election will bend what's left of the coordination rules even further.