When a loved one dies the normal dynamic is that the friends and family left behind go through a grieving process, each in their own way. The premise of this offbeat, meandering and not so believable movie is centered around what would happen if a wayward soul went on a mourning path that was antisocial, atypical and destructive. Not self-destructive, which would be understandable, but prone to destroying objects, to Demolition. 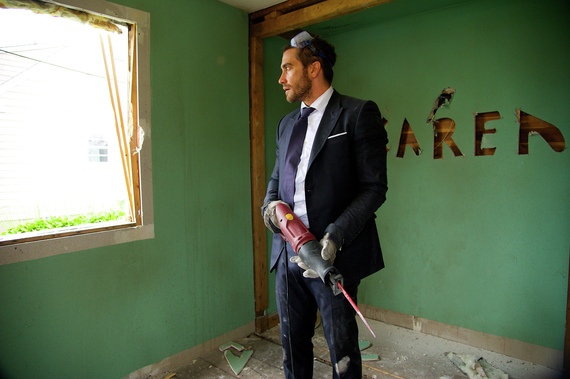 It might have been helpful to Bryan Sipe's screenplay and director Jean-Marc Vallée's (Dallas Buyers Club) storytelling if the central character was an approachable, sympathetic everyman. He is not. He is Davis Mitchell (Jake Gyllenhaal), a wealthy, overly handsome and well-dressed investment banker who works at a Wall Street company his father-in-law Phil (Chris Cooper, Adaptation) owns. If you're not already emotionally detached from the protagonist, just wait.

One morning while driving to work, Davis and his wife Julia (Heather Lind) are in the middle of a heated conversation about a broken refrigerator. The unthinkable happens. Their vehicle is broadsided. Bam! Sound of crumbling metal. Silence. Cut to the ER of a hospital. She is dead. He is dead inside and unable to express his anguish. While sitting in a waiting room, he uses a vending machine, puts in his money and doesn't get his M&Ms. He is incensed. He is relentless and outwardly angry with Champion Vending Machines. He writes a terse, detailed letter to the company.

Davis, to the surprise of his coworkers, shows up at the office almost immediately after his wife's death, acting a bit daft. He also develops a propensity for taking things apart, and not necessarily putting them back together. A light fixture. A toolbox. A fridge. It becomes an addiction, a high. Meanwhile, Karen Moreno (Naomi Watts), a customer service rep from the vending machine company contacts him. Cordial conversations turn into infatuation and romance. White-collar executive, blue-collar worker. Davis strikes up a friendship with Karen's teen son Chris (Judah Lewis), who is on the verge of coming out.

It's like watching and waiting for a dam to break because the water isn't trickling out safely. So you wait, and you wait while Davis becomes more odd, more in denial. You feel nervous about the things he does, but you don't necessarily feel sorry for this selfish man. He joins a wrecking crew. He demolishes his house with a bulldozer. Who knows where his displaced emotions will take him? Who cares? There is probably a way for a smart script and savvy direction to make a rich person's loss feel empathetic, but neither Sipe nor Vallee has a clue. Their only step in the right direction is an unlikely kinship between Davis and Chris, which is not based in reality.

Naomi Watts brings a sweetness to a very delicate character who is the lifeline for the very lost and out to sea Davis. Long periods of Davis' odd behavior are only tolerable because Chris Cooper brings so much sadness and anger to his roll as Julia's bereaved dad and the father-in-law to her indifferent husband. In a film that struggles to find its center and reason for being, he is a steady grounding fixture.

Seems like Jake Gyllenhaal has been working at a killer pace since his Oscar-nominated performance in the 2005 breakthrough film Brokeback Mountain. For all the iffy rolls he's taken (South Paw), he's had some gems too (Prisoner). Davis falls in the former group. The character is a tough one to crack, and Gyllenhaal never finds the creative solution that would make Davis appealing and not just eccentric.

Together, the script, direction and lead performance don't instantly reveal why this self-serving insular man's existence is worth following. As the storyline drifts into mental disintegration, and comes to a knee-jerk ending, Davis' deep sadness becomes apparent. Few will care as they leave theaters collectively scratching their heads.