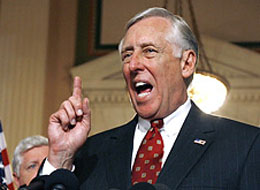 Rep. Steny Hoyer (D-MD), the House Majority Leader, postponed a press conference announcing new reforms of the Foreign Intelligence Surveillance Act after progressive lawmakers banded together and said they would fight any legislation that did not include a set of eight principles on wiretapping that preserve the "rule of law."

"What's most significant is that the Progressive Caucus came together and said to the leadership that all 72 of us require that these provisions be included," said Caroline Fredercikson, Legislative Director for the American Civil Liberties Union. "This changes the dynamic significantly."

Rep. Hoyer had planned to roll out the new FISA reform bill at 1:30 PM today. A spokesperson from his office told the Huffington Post that the House Intelligence Committee had decided to postpone completion of the legislation, though it's not clear that the announcement from the Progressive Caucus influenced their decision. Votes in the House were also canceled today. The committee was not available at press time.

The ACLU said it has not seen the language of the reforms that the Democratic leadership was preparing to get behind.

But while congressional progressives feared that their leaders would make permanent the expansions of wiretapping power that congressional Republicans brokered in August, some House Republicans were less sanguine about the outcome of the legislation. An adviser to Rep. Pete Hoekstra (R-MI), the ranking Republican on the Intelligence Committee, claimed that the Democrats had closed their Republican counterparts out of the process of drafting the legislation.

A copy of the principles on FISA reform sent to the Democratic leadership by the 72 members of the Congressional Progressive Caucus can be read after the jump.

We, Members of the Congressional Progressive Caucus, fully recognizing we live in a dangerous world but proud of, and deeply committed to, the values that have made the United States an exemplar for the world, affirm the following principles to guide consideration over the debate regarding surveillance of foreign intelligence. We hold that these principles represent the pillars by which America gives no quarter to terrorists who would do our country harm, while at the same time ensuring fidelity to the distinctively American commitment to the rule of law, the dignity of the individual, and separation of powers.

1. It should be the policy of the United States that the objective of any authorized program of foreign intelligence surveillance must be to ensure that American citizens and persons in America are secure in their persons, papers, and effects, but makes terrorists throughout the world feel insecure.

3. The Foreign Intelligence Surveillance Act (FISA) should be modernized to accommodate new technologies and to make clear that foreign to foreign communications are not subject to the FISA, even though modern technology enables that communication to be routed through the United States.

4. The Foreign Intelligence Surveillance Court (FISC) is indispensable and must play a meaningful role in ensuring compliance with the law. This oversight should include, where possible, regular judicial approval and review of surveillance, of whose communications will be collected, of how it will be gathered, and of how content and other data in communications to and from the United States will be handled.

5. Congress must have regular access to information about how many U.S. communications are being collected and the authority to require court orders when it becomes clear that a certain program or surveillance of a target is scooping up communications of U.S. persons.

6. Once the government has reason to believe that a specific account, person or facility will have contact with someone in the United States, the government should be required to return to the FISC to obtain a court order for continued surveillance. Reliance on the FISC will help ensure the privacy of U.S. persons' communications.

8. Authorization to conduct foreign surveillance gathering on U.S. soil must never be made permanent. The threats to America's security and the liberties of its people will change over time and require constant vigilance by the people's representatives in Congress.

Note: An earlier version of this story incorrectly stated that ACLU "had not been briefed" on the proposed legislation.