This is the third installment of a exclusive three-part series excerpted from Jonathan Rauch's new ebook, Denial: My 25 Years Without a Soul. You can read the author's introductory blog here, Part One here and Part Two here.

My thinking for a long time, as I struggled with my baffling fixation on muscles, was as follows. I was just a little boy: a child. I had a kind of kink in me which made no sense whatever, but this was all right. The reason it was all right was that it would go away. It was only natural for me, a small, unathletic child, to feel a kind of burning admiration for physically commanding boys and to yearn for big biceps. And, obviously, this would account for the odd behavior which I seemed impelled toward, and for the peculiar tingling. I was literally tingling with envy.

Not to worry, however, for I was a well-informed boy and I knew what would soon come to pass. I would reach a certain magical age and two magical things would happen. First, I would grow up and my body would swell with masculine heft and I would look like a man instead of a boy. Second, my sex hormones, hitherto dormant, would switch on and I would discover girls.

I could only imagine, as a prepubescent boy, the relief I would feel when nature finally flipped that hormone switch, when at last I would begin to slaver and tremble over pictures of boobs in dog- eared copies of Playboy, stashed lovingly under my bed. I looked forward to it.

Reader, I do not doubt that you will be as surprised and dismayed today as I was then when I tell you that this is not what happened. Or, as I saw things then, it was not yet what happened. My boyish muscle tinglings did not subside into manly breast cravings. Instead they all out of nowhere arose from their prepubescent recumbency and, like a mouse turning into a raging bear, they swallowed me whole. They did so in the person of Paul.

He was a boy of middling height, where I was short. He had darkish skin with a bit of olive color in it, where I was pale. He had light brown hair on his arms which turned tawny gold in the summer sunlight, where I was smooth. He was competent at sports, where I was a bumbler. He had a heavy, dense bone structure, where mine was very small and light. He had thick, powerful hands, where mine were skeletal and soft. He was not particularly handsome: even I never saw him as handsome.

But he was strong! Paul at 14 was a boy with a man's strength. The eighth grade health book contained a picture of a brawny workman's arm, holding a stack of boards aloft. I spent a good many slow lessons contemplating that arm. Paul, I saw, actually possessed it. He could bear me aloft with it as though I were a doll (I imagined). His thick right hand could envelop mine in a handshake and crush it. I began to think about him day and night.

What in the world was I? I pushed the question away. It pushed back. I pushed it away harder. It came back with redoubled force. I could only conclude, if I concluded anything, that I was a freak of nature. I had no sexual feelings, but instead was madly obsessive. I could not be a homosexual: I was not effeminate, I had no desire to be touched sexually by a man, indeed the concept mildly revolted me. But I was not behaving the way heterosexuals behaved. If I thought about it, I saw that there was no place on earth for me. I was otherworldly.

So, understandably, I tried not to think about it. Instead I did what has since become known as compartmentalizing. In one compartment was my rock solid belief that I had no sexual feelings at all. In the other compartment was: Paul. Day in, day out, Paul. Paul was a standing reminder that I was nothing like normal, yet I was not even provided the grace of being normally abnormal. Paul was harder for me to rationalize than Bill Jones's thighs, because I did not fetishize just a few bits of him: I fetishized all the bits of him (except, always except, that one forbidden part).

Toward the beginning, when I was about 14, my attention was seized by his hand. One day he pushed a piece of paper along the floor toward me. When I picked it up, I found a handprint. It might as well have been a pornographic drawing. I was astonished, riveted. I tried to stretch my hand over it and found that his broad palm easily eclipsed mine and his fingers were oaks to my weed stalks. From the hand, my attention quickly grew in compass until Paul loomed in all respects, in every particular, as a physical superman. No, as Superman. As Sinbad Jr. But flesh and blood, and two rows away from me in Spanish class! I began drinking him in, feasting upon fantasies of his strength. I had no idea why, or even what it was that I was doing. I had not acquired this new obsession, which dwarfed all earlier ones: it had acquired me.

I am always bitterly amused when I hear people say that homosexuality is a choice. Even many otherwise thoughtful people maintain that the homosexual is a heterosexual who perversely ignores, or at least somehow represses, his natural cravings. I say "otherwise thoughtful" because I know of no position which collapses more quickly, under even a moment's examination, than this one. Never mind the obvious question of why anyone would choose homosexuality, with all the inconveniences and confusions and difficulties it poses. Let us suppose, for argument's sake, that there are people who declare: "Actually, I would prefer to be (probably) childless, to face a hundred kinds of social difficulties, to disappoint and maybe horrify my parents, to risk alienating myself from some of my friends and many of my peers, to be an object of disgust and scorn to many millions of people. Sure. Sounds fun."

Let us also overlook, again for argument's sake, that many homosexuals, far from embracing their condition, struggle desperately to change or suppress it, even to the point of suicide. No: imagine that homosexuality is something many people contemplate and choose. Now arises the question: suppose (I want to ask heterosexuals) you decided, at age 14, to fall desperately in love with a classmate of your own sex. How would you go about doing it? How would you talk your temples into throbbing and your throat into constricting? How might you arrange to get a stone hard erection, all out of nowhere, whenever you touch the image of a certain young man's strong hand?

That handprint made my face hot, my throat tight, and my penis hard. How would you set about having such a reaction to a handprint, if you had "decided" one day it was a good idea? What hormonal levers would you pull? "Choose" to spend days in school and nights in bed thinking about, dreaming about, gazing upon Paul? Just so does the dragonfly choose the winds that whip it in a hurricane. Amid the storm, the only thing I knew, my only certainty, was that whatever was happening to me was driving me relentlessly, mercilessly, away from any hope of love.

This excerpt from Denial: My 25 Years Without a Soul is published with permission by The Atlantic Books.

DENIAL: Homosexuality Is a "Choice," Right?
Denial By Jonathan Rauch 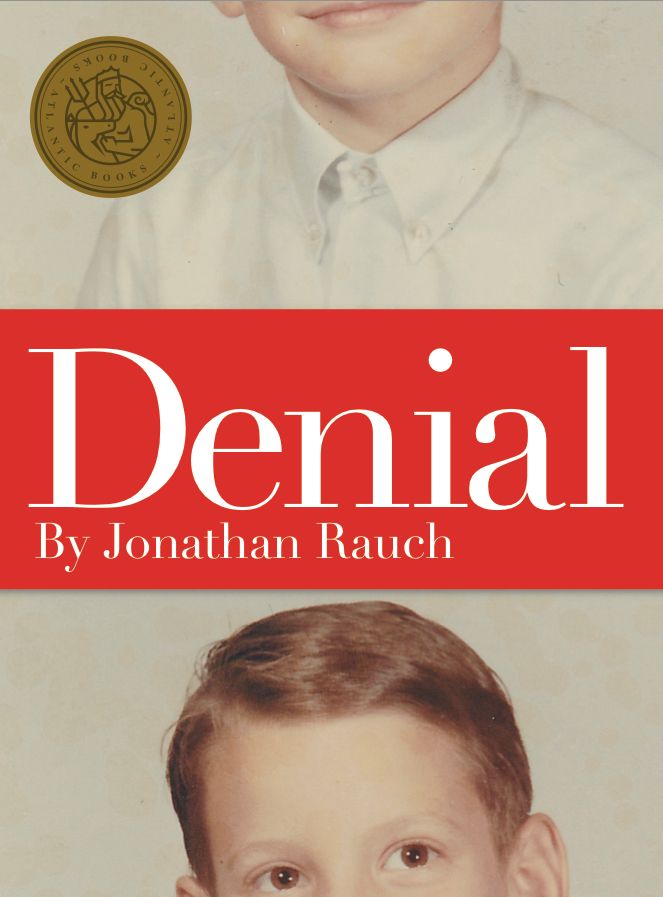