If money is one hell of a drug, then denial is one of the biggest drug dealers in the world. And no group understands that truth better than survivors of child sexual abuse. While survivors, advocates and some lawmakers have fought hard to bring justice, there's been little progress made; if anything, we've been forced to take giant steps backwards. And by forced, I'm referring to the tremendous power of, more than anything, denial.

Take, for example, the recent killing of the child victims act by NY state lawmakers. Senate Majority Leader John Flanagan offered little explanation when asked as to why a deal couldn't be reached by Governor Cuomo, Senate, and the Assembly. As quoted by the NY Daily News, Flanagan merely said, "There was no agreement, that's it." Senator Brad Hoylman, a Democrat from Manhattan who supported the Child Victims Act, noted that the Senate gave the green light to authorize online fantasy sports betting. But yet, historically, isn't this usually how things go down? Nonsensical bills such as the online fantasy sports betting and the act pushing for food to be served in funeral services establishments are cleared through the Senate and Assembly; however, it can take years and years to see any change in the areas of mental health reform, child sexual abuse prevention, and of course, gun control.

Thus, the killing of the Child Victims Act in New York equals no statute of limitations reform for child sexual abuse survivors. The Catholic Church paid over $2M for lobbyists to block the reform. Of course, they did. Why wouldn't they? Like I said, scoot some money in, look the other way; denial is the biggest drug trafficker, and money is the most abused drug in the world. Flash some money in front of some lawmakers' faces, and they will do just about anything they are paid to do.

In America, there are over 42,000,000 survivors of child sexual abuse, and that's just the reported estimate. I am a survivor; mind you, the word "survivor" has absolutely no glamorous connotation attached to it. Recovery has been like swimming in a blood bath; for the most part, many of us deal with a variety of mental health conditions. Getting to a place of recovery can be a literal miracle. And yet there is slim justice I or any survivor can seek currently for the horrors we have had to face; horrors that are equivalent to being murdered silently over and over again.

I'm sure that the girl who Marc Gafni admitted abusing can't take any legal action, either, which leads me to my second case. Back in May I attended a coordinated protest at the opening of the 365 by Whole Foods in Los Angeles. Together with NAASCA, Nancy Levine (author of The Tao of Pug), and my colleague, Matthew Sandusky from Peaceful Hearts Foundation, who led the protest in New York City, we stood outside of the store and attempted to educate potential shoppers about Co-CEO John Mackey's ties with Marc Gafni, and his loyalty to Gafni by not standing up on a public level for survivors of child sexual abuse. 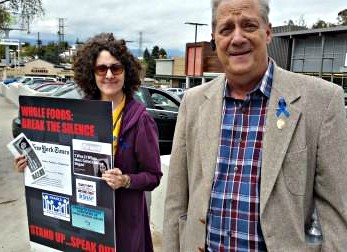 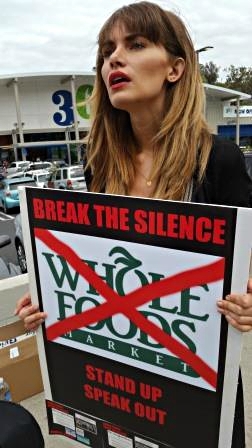 Mackey is positioned as a leader, and can use his voice for the greater good; instead, similar to mentioned NY lawmakers, he has chosen to remain silent and back a known pedophile. Again, abusing money and looking the other way leaves no progress for the millions who have been victimized. You, dear Mackey, are enabling the abuser and acting like one, yourself, in your chosen silence.

The Mackey situation ties into my third point. Gabrielle Greene Sulzberger, the wife of publisher Arthur O. Sulzberger, Jr., sits on the board of Whole Foods. In a recent article by Levine which uncovered email exchanges that took place between her and Executive Editor of the New York Times, Dean Baquet, Levine referenced the relationship between the New York Times lack of reporting on the Child Victims Act and the Sulzberger financial interests in Whole Foods Market. Mr. Baquet replied, "Only someone quite paranoid would see such a connection." This is a classic gaslighting response. But not only did the New York Times not cover any news of the Child Victims Act, they also did not follow up on the Gafni story, and did not report any of the related protests that took place at the 365 by Whole Foods. As well, they never bothered to publish any of Mackey's statements; and yet, Levine is accused by Mr. Baquet of being paranoid for seeing a connection?

His response is all too familiar. When I was sexually victimized by someone close to me and victimized by my mother, I was made to feel as though I was someone who had no voice, who was "crazy." As a child, I developed a serious inferiority complex. During my modeling career, I was raped by a photographer, and when I confronted the director of my agency, I was shot down immediately, and told, yet again, that I was "crazy." Instead of seeking help right away, I buried the pain with eating disorders, substance abuse, and lived in...denial. (To find out more about my story, sign up for the release of my memoir here.)

Every leader here has a platform to help survivors of child abuse, and yet they choose to remain silent. In doing so, they are enabling the perpetrators and hindering the millions of victims from getting the help they so desperately need. Abusers feed off silence and denial - see the connection? I don't think you can call us paranoid now.

Here's what you can do to help:

• Donate to the PAC (Political Action Committee) started to help support NY politicians who will support the Child Victims Act in the future and vote out of office the bill-killers.
• Search Statue of Limitations by State and help bring justice to victims.
• Write to Liz Spayd, the Public Editor of the New York Times, and ask her to address the "appearance of a conflict of interest" -- public@nytimes.com
• Stop shopping at Whole Foods and 365 by Whole Foods and spread the word. Do not support companies who refuse to help victims of child sexual abuse, and enable sexual abuse predators. Think carefully the next time you support a company with your hard-earned dollars.