Growing up by the ocean, Denise Amses' world was formed by water and light. As a child, she collected beach glass from her walks on the Jersey shore. When she began painting, she chose watercolors. The play of light on the surface of the water was the focus of her work.

Taking her talents to the Philadelphia College of Art (now The University of the Arts), Amses enrolled in a year abroad program, choosing the Tyler School of Art in Rome. "It was a revelation that art was something that could be found outside of museums," she explains. "A door, a fountain or a mural integrated into architecture were part of the fabric of everyday life in Rome recalls Amses," citing the Trevi Fountain integrated into an intersection of the city streets as one of her favorites.

Rome was the beginning of Amses' determination to be involved with public art and an anonymous audience. The journey that has taken her to some of New York's most iconic buildings, began when she responded to an ad in the Village Voice for an artist's assistant. Very New York.

The job itself brought her to the atelier of artist Benoit Gilsoul, a Belgian artist producing church commissions, including the Tillman Chapel at the Church Center for the United Nations. As his protégé, Amses began a hands-on apprenticeship working with stained glass, metal, etched glass and stone. Very 15th century. 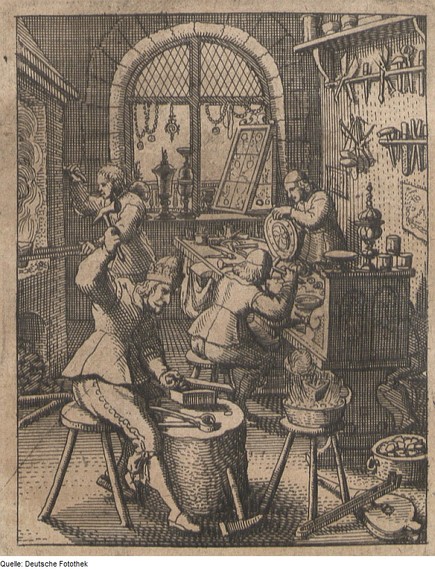 Next, Amses synthesized current New York City art practice and the European atelier system that worked on private commissions. "I had a dream to bring art to a democratic audience that consisted of people passing by and interacting with art on their way to work or during their lunch break. I didn't want my works to be relegated to museums and their paid visitors." Very New York.

Amses began to think about the city and where her work could be woven into the fabric of people's daily lives. "New York is fueled by real estate. So, I decided to present my work by visiting architects' offices," explains Amses. The medium of glass was where she found her art could meet architecture. "Glass is a great medium for New York because it's building material, but it can be a medium of artwork as well. I wanted to elevate glass to a new level of artistic expression." Recalling the effect of sculpted stone, fresco and terracotta in Rome, Amses began to think of ways in which glass could become part of the everyday environment for New Yorkers. "By harnessing the functional and artistic aspects of the material," explains Amses, "I am able to explore both light and space in an urban setting."

Amses began working on commissions in glass using a variety of techniques that were a cross pollination of artistique and industrial techniques. She might conceive of a project and then use reductive industrial etching techniques based on drawing and painting. On other commissions, she would employ a sculptural approach using casting processes to create three-dimensional glass elements. Using these techniques, Amses received numerous commissions to create glass screens and interior walls for high-end spaces in New York buildings. On one such job, she met her husband, Christopher Cosma. They decided to combine households and studios, establishing Amses-Cosma Inc. in 1991. The couple soon began to receive large commissions for public spaces, Amses original dream.

"We set up an industrialized studio for the creation of architectural pieces," she explains. "We situated our studio in Brooklyn because that's where the materials and space were available. Our neighbors were metal fabricators and commercial glaziers.

That same year, Amses and Cosma received a commission from 30 Rockefeller Center, NBC World Headquarters and the setting of the television show created by Tina Fey. Cue theme song, please.

The building was undergoing renovation. The architects, Beyer Blinder Belle, were seeking a work for the refurbished concourse. This presented Amses and Cosma with the opportunity to bring light into the dark interior space that pulsed with the rhythm of people on their way to work, at lunch or leaving the building on their way home. 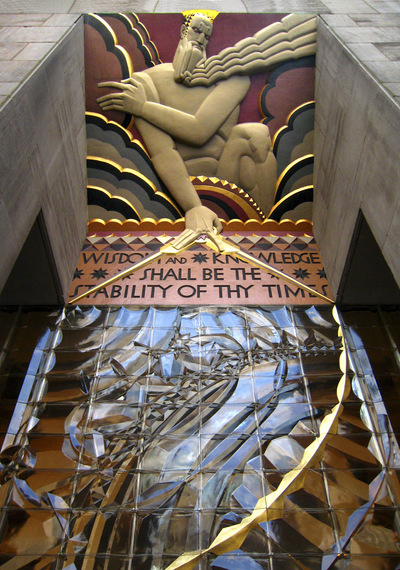 The frieze located above the main entrance of the Art Deco building was produced by Lee Lawrie and depicts "Wisdom Creating the Universe," along with an inscription reading "Wisdom and Knowledge shall be the stability of thy times," from Isaiah 33:6. shows the figure of God taking the measure of the universe and separating light and dark.

This was also the year that images from the Hubble Space Telescope were received on Earth. The project was launched to observe light in space including near ultraviolet, visible and near infrared spectra light. These images of light from deep space were perfect for Amses and Cosma and their commission. 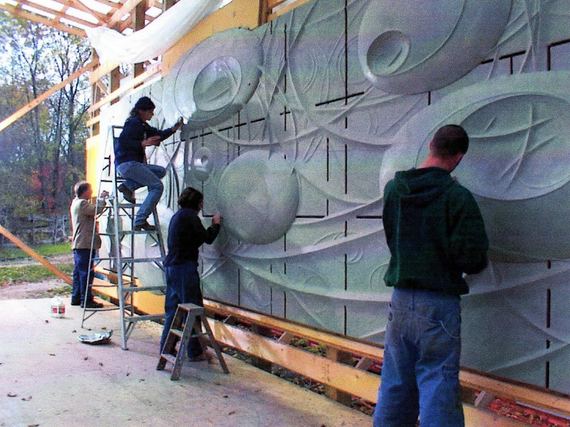 Rhythms of Infinity was designed to merge the concourse of 30 Rockefeller Center with constellations, galaxies and planets. Walking past the sculpture connects the viewer in the heart of the communications hub of the city with the infinite space of the universe.

A site-specific bas-relief sculpture, the work employs light reflecting industrial materials: cast crystal, stainless steel and programmed light. It weighs 12 tons, and its length is an impressive 32 feet, allowing the passerby to engage with the sculpture while passing through the lobby at a leisurely pace. 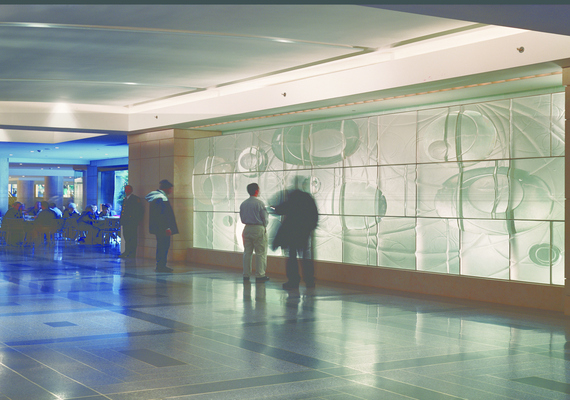 In 2011, Amses was invited to provide new lobby art for the refurbished Empire State Building. Arguably the architectural star of midtown New York City, the building is known for its changing lights that mark the New York skyline below the evening stars. And stars was the theme that Amses chose for the work, more exactly 15,000 stars that she etched into the glass installation, along with 400 circles. The entire installation consists 16 panels of etched glass. "Using the industrial modernism of the Empire State Building as a starting point, I included universal symbols of motion and time in the project," she explains.

For the commission at the Empire State Building, she said, "My concept was to create a whole world inside this window." She chose the title Circle In to describe the experience for the viewer, who pauses briefly, then takes the elevator upward to expansive views of the city. Circle In is almost a stealth act by etched glass and cold cathode lighting. 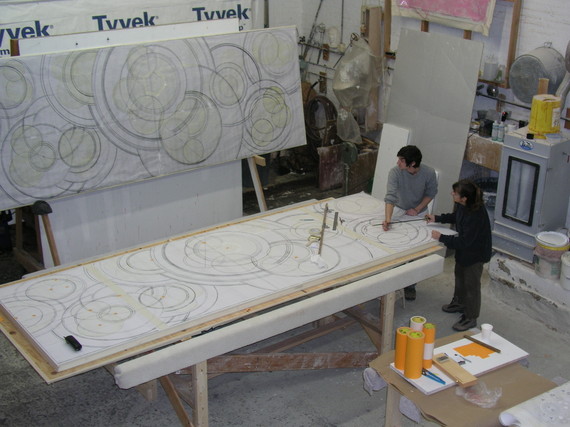 "I used to present a graphite sketch on a piece of vellum, and clients would buy pieces that were basically sight unseen. It was an act of faith between the artist and the patron, much like the commissions received by artists during the Renaissance." But computers have changed the art world. Now, people want to see the final project before it's even begun. I'm a hands-on person." 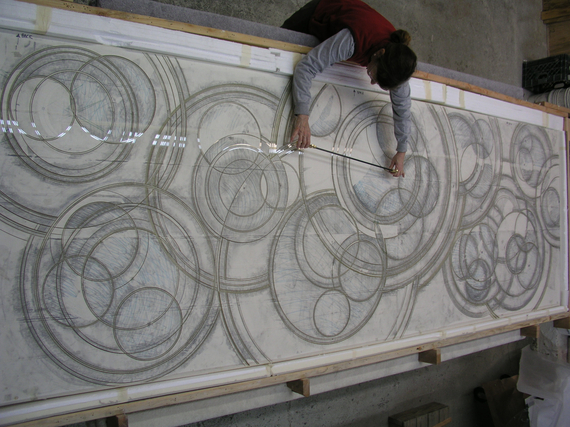 Along with changes in technology and patronage, Amses' Brooklyn neighborhood was also undergoing a metamorphosis. More artists were moving into the industrial zone in Brooklyn. There was a disconnect between the heavy machinery of her studio and the new hip vibe of her street. Amses also missed something else in her work. Color.

"Glass reflects light and absorbs surrounding color," says Amses. But I was missing color, which was so important in my early work." Amses opened the drawers in her studio and took out her watercolors before heading out to the Brooklyn Botanic Gardens. Here, she began to spend days outdoors, painting the flowers of the garden in rich, saturated hues.

Ever attracted to the combination of water and light, Amses has found a way to combine the light of glass with the hues of her recent watercolors. She presented her Brooklyn watercolors to Pulp Studio in California. The watercolors are digitally printed and laminated between glass panels. The result was small panes of glass featuring her Brooklyn Botanic Gardens watercolors that can be incorporated into architectural projects in private homes, healthcare facilities, hotels and schools. "It's new for me," says Amses as she balances several panes in one hand. "This offers freedom to individuals to use my glass work and create their own space. It's a new democratization of the arts that excites me." 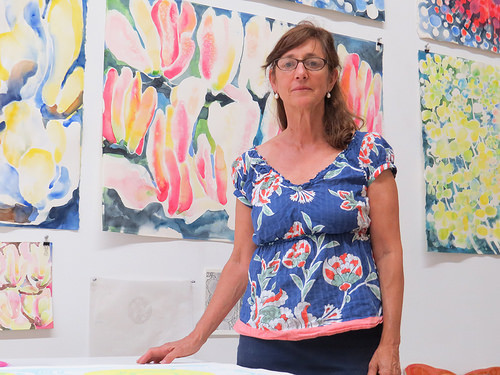 Ames and Cosma have also worked with Pulp Studio to produce ALIGHT bas-relief cast glass. The collection is the first specifiable bas-relief cast glass panel system for interior or exterior use. Amses has used ALIGHT inside New York City buildings as well as on the city's streets. 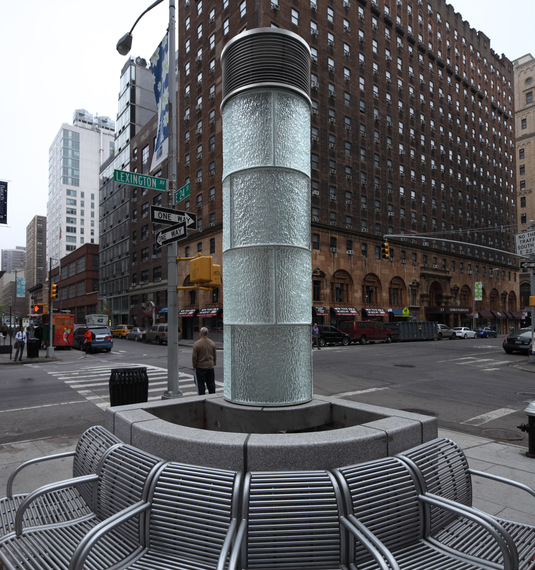 In her ALIGHT installation at Lexington and 24th Street, Amses has created a space that is part of the fabric of New York City by using glass, stone and steel that echo the neighborhood buildings. The work, including a circular steel bench surrounding a shallow fountain of water and a shaft of light, is situated on a busy intersection in Kips Bay. Here, city dwellers can relax or engage in the New York sport of street watching while sitting in an oasis of calm in the busy city. It's just like the Trevi Fountain of Rome where people regroup from the finger-snapping tempo of city, refreshed by the reflection of light on the surface of the water. Very New York.

Asked to name the artist whose work most informs her own approach, Amses cites Henri Matisse and his Rosary Chapel built for the Dominican sisters in Vence, on the French Riviera. The three sets of stained glass windows Matisse designed for the Rosary Chapel feature a vivid blue, a reference to the Madonna, the water of the Mediterranean Sea and the vivid blue skies of the French Riviera. This union of water and light floods the all-white interior of the chapel. Matisse considered the chapel to be his masterpiece. It was the product of his declining years, and his first work designed for a church.

Questioned about her own future works, Amses cities new technology, materials, aesthetics, expectations and audiences that continually present new artistic opportunities. Says Amses: "Like light shimmering on the surface of the water, the possibilities for creating new art are constantly changing."