The mother of Denise Lynette Hart, a missing 25-year-old Connecticut college student whose vehicle was recently found ablaze, is desperate for answers in her daughter's unexplained disappearance.

"Not knowing is killing me," Dedre Robinson told The Huffington Post. "I just want my daughter home. I need her and her 3-year-old son needs her. We're incomplete without her."

Hart, who is studying to be a parole officer, was last seen on the evening of Jan. 25, when she left a friend's residence in Sudbury, Vermont. Sudbury is a small town located in the Champlain Valley.

Several hours later, in the early morning hours of Jan. 26, the 2001 Pontiac Grand Am Hart was driving was found engulfed in flames near the Cornwall-Salisbury Covered Bridge, which is located roughly 11 miles south of Sudbury.

Because of the circumstances, Waterman said there is a "strong indication" of foul play.

Detectives have conducted multiple interviews with individuals who last had contact with Hart. What, if anything, they have learned is not yet known.

"That is part of the investigation," Waterman said. "We can't get into the relationship she had with folks here."

According to Robinson, her daughter regularly traveled from her Hartford, Connecticut, home to Vermont.

"She has friends up there that she has known for a while," Robinson said, adding that her daughter was not dating anyone in that state that she is aware of.

"She is a wonderful person," Robinson continued. "She is very family-oriented and she adores her 3-year-old son."

The distraught mother said she is now caring for her daughter's son, who does not yet know his mother is missing.

"I'm taking care of him," she said. "I'm trying to keep him in the dark. He knows something is going on, but he doesn't know what."

In an unusual twist to an already bizarre case, Robinson said her daughter was named after her father's aunt -- her grandmother's sister -- who was murdered in the 1980s.

"All I know is that her boyfriend at the time climbed in a window and killed her," said Robinson.

"That crime has been solved and that person has done his time," Gloria Hart told HuffPost. "I have a mental block of it. I won't let myself remember it. That’s my way of protecting myself from the pain."

Denise Hart's father, William Hart, said he is horrified by the thought that his daughter's disappearance could be equally tragic.

"She's a treasure to me," Hart told HuffPost. "I just want somebody to find her."

Authorities in Vermont are actively investigating Hart's disappearance. On Wednesday, investigators conducted a search of Otter Creek. The stream runs below the Cornwall-Salisbury Covered Bridge.

"We searched with sonar and cameras, [but] nothing turned up," Waterman said.

For now, Robinson and the rest of Denise Hart's family must continue to wait for answers.

"As a mother and a grandmother, I am asking anybody with any information to please call the police," Robinson said. "We just want to know where she is."

Denise Hart, also known as "Tiffany" and "Chookie," is described as an African American female, 5 feet 1 inches tall and 115 pounds. She has black hair and brown eyes. Anyone with information is asked to contact the Vermont State Police at 802-773-9101. 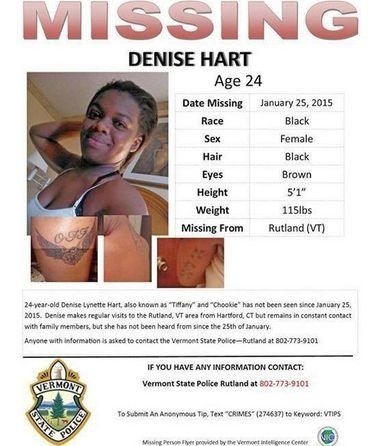 Denise Hart Missing: Foul Play Suspected In College Student's Disappearance
Cold Cases
1 / 18
El Dorado Jane Doe
We know who killed her. But we still don&rsquo;t know her name. That is the enduring mystery that has left investigators stumped for more than two decades. Despite the passge in time, authorities beleive someone, somewhere, can still help solve the identity of the woman known as El Dorado Jane Doe.<br><br><strong>READ:</strong>&nbsp;<a href="https://www.huffpost.com/entry/eldorado-jane-doe_n_56e6d679e4b0b25c918276a3?x3l3di" target="_blank">We Know Who Killed Her. But 24 Years Later, We Still Don&rsquo;t Know Her Name</a>
El Dorado Police Department