COPENHAGEN -- "I love Denmark!," Hillary Clinton exclaimed during a debate with Bernie Sanders in October.

Denmark -- a tiny welfare state known for its liberal values -- was, according to Sanders, a model to be emulated or at least applauded.

In the months since that debate, Denmark's reputation abroad has started to tarnish. Danish lawmakers have adopted a series of controversial measures in order to deter refugees from applying for asylum. In September, the government ran an anti-refugee ad campaign in Arabic newspapers warning them against going to Denmark. In December, Prime Minister Lars Lokke Rasmussen suggested that the 1951 Refugee Convention -- a treaty that Denmark was instrumental in formulating and the first country to ratify -- should be revised. And just last month, Denmark passed a bill restricting access to family reunification for Syrian refugees up to three years and allowing the police to search refugees and seize their assets.

The harsh measures have caused an international outcry but also genuine surprise: why has Denmark -- supposedly a brand name when it comes to human rights and development -- adopted such austere policies? Why is Denmark suddenly leading a race to the bottom in Europe when it comes to deterring refugees?

In fact, this should have come as no big surprise. Over the last 15-20 years, Denmark's understanding of its role in global affairs has radically transformed, just as its immigration policies and national debate on Muslim immigration have. 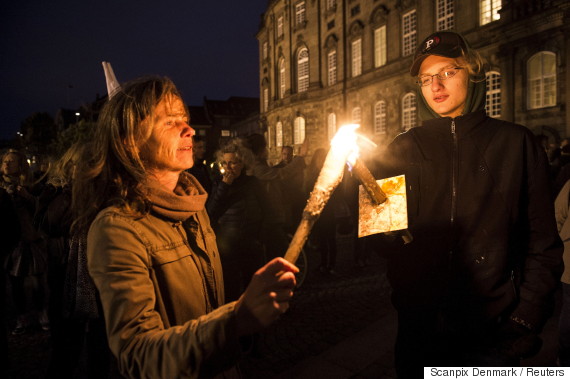 People participate in a demonstration to show support for refugees in Copenhagen on Oct. 6, 2015. (REUTERS/Soeren Bidstrup/Scanpix Denmark)

Danish foreign policy since World War II has been defined by a firm belief in the virtue of international rule of law, multilateralism and peaceful conflict resolution. For a small state, with just over 5.5 million inhabitants, Denmark always considered strong international institutions in its own best interest in order to soften the effects of great power politics.

At the same time, successive Danish governments also worked to promote Denmark as a model country by leading the way on issues like refugee protection, human rights and development aid. Since the 1970s, Denmark has met the United Nations target of devoting at least 0.7 percent of gross national product to development aid; by the 1990s, Danish aid amounted to more than 1 percent of its GNP. Denmark also touted the importance of diplomacy and peaceful conflict resolution and generally preferred to send hospital ships and humanitarian aid rather than soldiers to conflict zones around the world. And when Denmark adopted its famously liberal asylum and immigration act in 1983, it was repeatedly held forward by the U.N. as an example to follow.

However, with the end of the Cold War, this foreign policy posture started to change. Denmark participated in the Kosovo intervention, seeking to prevent another genocide in the Balkans, using force without a U.N. mandate for the first time. This new willingness to use military force was dubbed active internationalism and has been used to legitimize Danish military adventurism in the Middle East ever since.

Since 2002, Denmark has engaged in all wars and interventions in the Middle East alongside the United States: from Afghanistan and Iraq to Libya and now in Iraq and Syria. Denmark today is a warrior nation. In Afghanistan, Denmark fought in the most unruly region, Helmand, and has the sad record among coalition countries of having lost the most men in relative terms. At the same time, Denmark has made continuous cuts on development aid, which is now back to 0.7 percent of the GNP. While Denmark still belongs to the world league on development aid, it is no longer leading the pack. 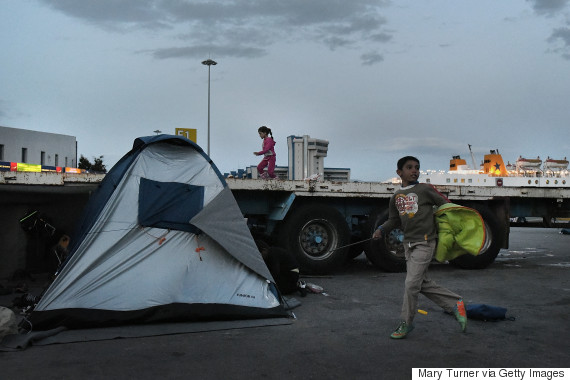 A more modest approach is also echoed in the official foreign policy discourse. According to the prime minister, Denmark should, as a small state, no longer aim to "change the world" or focus on lofty ideals of democracy and human rights; rather Denmark should prioritize its "national interest" and make the country a secure and safe place for the Danes.

That applies to immigration policy as well. As European solidarity has faltered in the wake of the refugee crisis, Denmark is among the countries that has most openly justified more restrictive policies. While the welfare state still offers better conditions for asylum-seekers than many other European countries, Denmark's most recent restrictions are the result of a slow but persistent U-turn.

Since 1983, the Danish Aliens Act has been amended more than 100 times, from 2001 onwards nearly once every second month. While some of these amendments reflect administrative matters and international cooperation, there is a clear pattern of restrictive measures from the 1990s onwards. Denmark, moreover, never ceded sovereignty to the European Union in regard to asylum and immigration matters. Several of Denmark's policies on asylum and family reunification, for example, would not have been possible if it had to comply with EU law in this area.

Danish policies have further served as inspiration for other countries in Europe. Denmark was among the first countries to reject asylum claims on the basis that the claimant had travelled through a safe third country. This concept, which is the underlying premise for EU's current efforts to strike a deal with Turkey, came to be known simply as "the Danish clause" in the 1990s. Today, Danish asylum and immigration policy presents a shopping list for other states wishing to adopt deterrence measures; because of Denmark's liberal heritage it, these policies are a precedent that's easier to follow than if they came from notorious hardliner states. 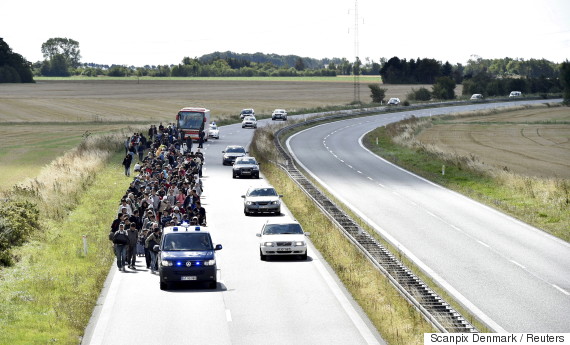 A large group of migrants, mainly from Syria, walk towards Denmark on Sept. 7, 2015. (REUTERS/Bax Lindhardt/Scanpix Denmark)

Denmark's deterrence policies are designed to make its asylum system appear as unattractive as possible and thereby achieve a beggar-thy-neighbor-effect, pushing asylum-seekers towards other countries instead. Data for 2015 shows that Denmark has managed to maintain a surprisingly low number of asylum-seekers, especially compared to its neighbors, Sweden and Germany.

And yet, Denmark is entering a high-stakes game. Europe has been here before, and experiences from the 1990s show that neighboring states will always hedge against these sorts of policies by preemptively adopting their own restrictions. Indeed, this is what is happening now across Europe. Germany, for example, has replaced financial benefits to refugees with coupons to claim food and clothing items. Sweden, for a while the last liberal bastion in Europe on asylum policy, has implemented several restrictions and reintroduced border control towards Denmark.

These measures are currently driving a downward spiral, with European governments fiercely competing to push asylum caseloads to a neighboring country. Like Denmark, most other European countries have shifted towards more insular policies, looking to serve the national interest over any commitment toward common European solutions.

In that sense, the refugee crisis is perhaps symptomatic of a deeper change across Europe -- away from internationalism and back towards the nation-state.