Dennis the dachshund is a new dog.

Less than two years ago, the little dog weighed 56 pounds. He was on a diet of White Castle burgers and pizza, according to the Associated Press. When nursing student Brooke Burton saw Dennis, who belonged to a relative of hers, she was upset over his condition. Burton persuaded her relative to let her adopt the pooch.

Now, Dennis is a slim and trim 12-pound pup, thanks to a diet of dry food and a walking regimen.

"We should not be feeding dogs people food and overfeeding them and giving them excessive amount of treats. And just like humans they need proper diet and exercise to live a good healthy life," Burton told WSYX in January. 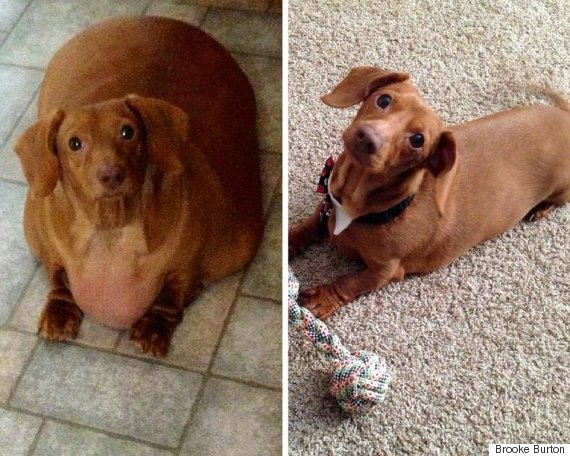 Dennis needed some surgical help, too, due to excess skin after his weight loss. He would trip over the loose skin and cut himself. Those cuts in the skin folds ultimately became infected. He has had three reconstructive surgeries to help this, according to the Columbus Dispatch, partly paid for by donations from a GoFundMe account that Burton set up.

Dennis' personality is now shining through.

"In the beginning, you could tell he was very depressed, that he really didn't feel good at all," Burton told the AP. "He didn't have much of a personality. After he lost weight, this bossy little demanding man popped out. He's into everything, he wants to play with everybody."