At the Bakersfield Museum of Art, artist Dennis Hare is the subject of a retrospective curated by Vikki Cruz featuring 26 paintings and assemblages. Hare's oeuvre consists of a wide range of both figurative and representational works, some of which include discarded objects, tar, emulsions, and lacquers. An individualist who is careful to work outside the "rules," Hare aims for an art of deep feelings, which he hopes will inspire his viewers to develop their own inner dialogues in response to the work.

I recently interviewed Dennis Hare, and asked him about his background, artistic development and influences. 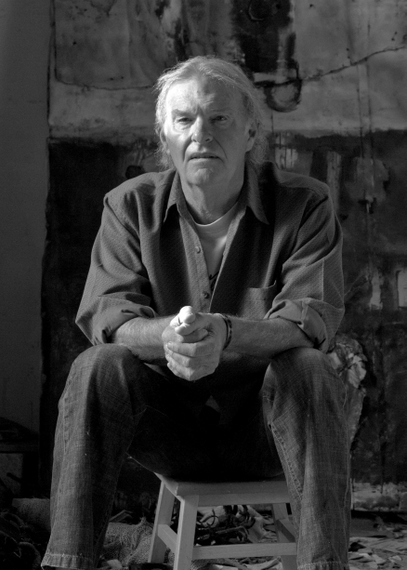 JS: Tell me about your early years and the artistic household you grew up in.

In the 50s my parents traveled often to Panama and Mexico and produced short travel movies. At home, to create was a discussed virtue. At this time I had dreams of becoming a professional athlete. Because of the musical influence at home, I became a music lover and I always paint to music. I was fortunate to obtain permission to use music from the movie soundtrack Eye Origins to accompany my show: it's on an 18 minute loop and is also included in a short video of the exhibition. I often feel that the tradition of composers who have been inspired and influenced by art is missing from many exhibitions.

There was a wonderful article that spoke to this tradition in the LA Times last July titled In Tune with Art. 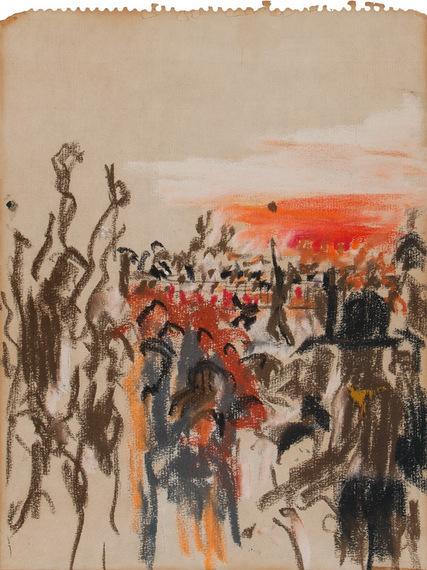 JS: Tell me about how your background as an athlete playing beach volleyball led you towards making art.

DH: When writing my book The Art of Beach Volleyball in 1979 I needed to illustrate the fundamentals of the game. I thought I was going to become a coach. At this time I had achieved a great amount of success as a beach volleyball player. In 1974 I won the first indoor doubles world championship. In 2006 I was inducted into the Beach Volleyball Hall of Fame. I started sketching for my book and doing watercolors. I was so fulfilled creating art for my book that it confused and excited me.

Shortly after I went to see the Phillips Collection at The DeYoung Museum. I was alone and much of the work moved me but one painting brought me to a moment of clarity: it was Vincent Van Gogh's Entrance to the Public Gardens at Arles. I realized then that I was an artist and that I would devote my life to it. I have never looked back. Whatever it took, including living in a van for a few years. 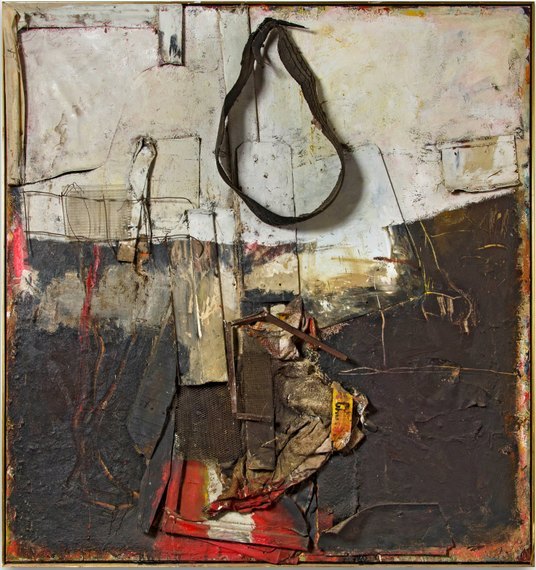 I had a very Zen approach to volleyball and it is what I call upon in my art. Beach volleyball is one sport that does not require a coach and I believe that is what drew me to it. I resisted instruction in art, as I believe it is fundamental to be authentic when creating. I of course read and studied at my own pace and went to every museum that I could and spent hours viewing the greats. I felt the need to see more Van Goghs as his work burned deep inside so I spent time in Amsterdam soaking him in.

David Park is one of the painters I admire and as an art instructor he cautioned against learning "the rules." As an athlete you must hold an image in the mind of the specific movement you want to achieve and this too helped me greatly as I painted figures. 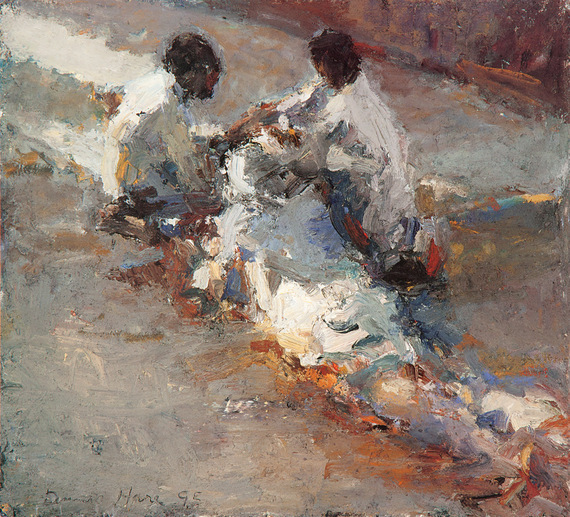 JS: How long were you in Mexico, and how did your art develop while you were there?

DH: I spent two years in Mexico, in a seclusion of sorts as I needed to teach myself the art of art. I painted religiously every day. The colors of Mexico were so rich and vibrant and the joy of the people, especially the children influenced me. I worked exclusively in representational watercolors. Cantina from this time period is in the show and catalog. 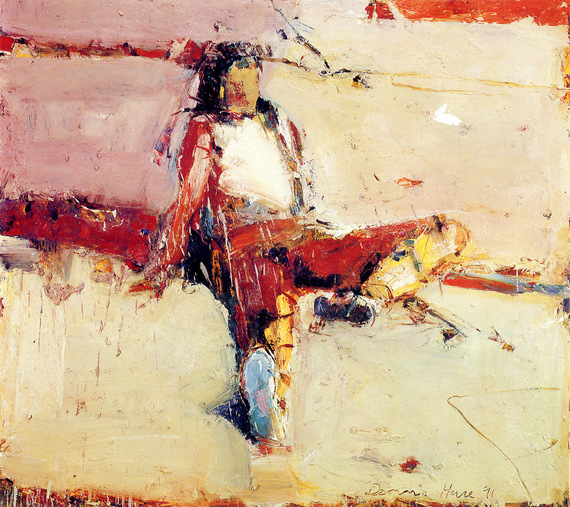 JS: When you came back to the U.S. you showed your work in the Bay Area. How did you connect with the tradition of Bay Area Figuration?

DH: I have always been draw to the human figure. Early heroes were Sargent, Homer, Hopper but when I saw the Bay Area painters I fell in love with the expressive way they painted the human figure. Diebenkorn, Park, Bischoff and Olivera all influenced me. I'm known mostly as a figurative painter but also enjoy working abstractly: I love painting either way. 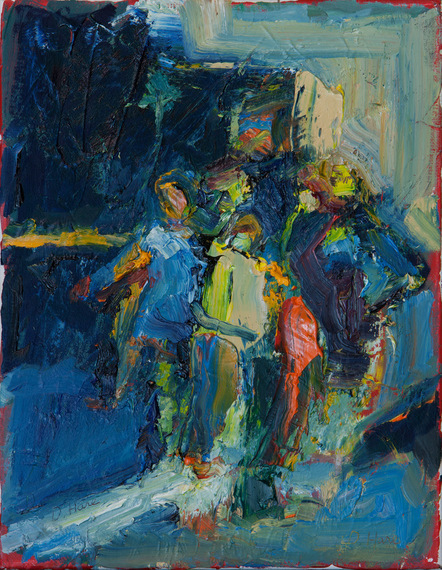 JS: You have been called a "social painter." Do you agree with that label?

DH: I have always liked painting groups of people in common environments.The culture of a scene intrigues me as the colors of culture do. I feel these cultural scenes have an authenticity. The label of a "social painter" does fit me. I want a humanness to be present in my work: it speaks to me and maybe the viewer. 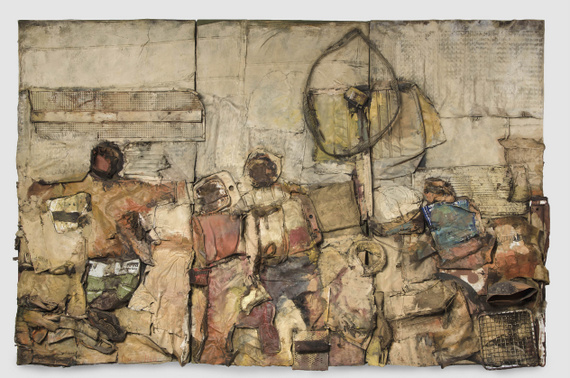 JS: How and when did you begin incorporating detritus and rugged collage elements into your work?

DH: I wanted to find new ways of expressing the figure: going beyond the Bay Area painters and I wanted to work big. In my first piece I ended up with a triptych measuring 96 x 144 inches that depicted children playing. Unlike other assemblage artists I used paint along with found objects, cans, leather, fabric and rope. This allowed me depth and richness that I could not convey with just paint. This piece is titled Children of Rosarita, and It is featured very prominently in the museum show. Other assemblages in the show include The Big Plan, which is figurative, and Hats which is more abstract. 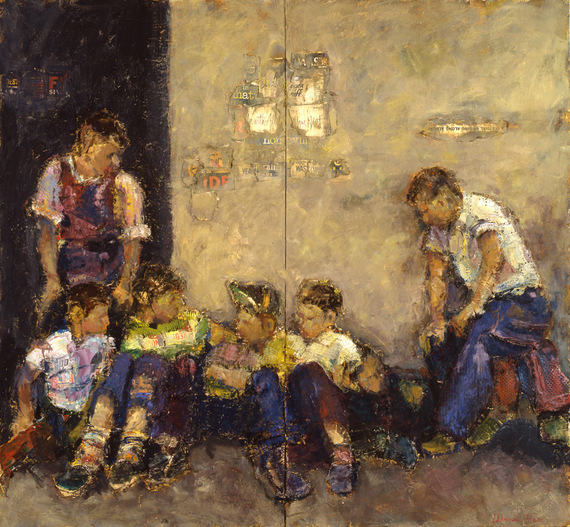 JS: What are your interests outside of art.

DH: I've spent many years in seclusion, doing my own thing, which is art. My large studio is off the living room in my home. I paint most every day: I say my world comes together in the studio and I feel authentic in my humanity there as well. I love all forms of art. I am an avid film lover and music lover and good books too are a big part of my life. 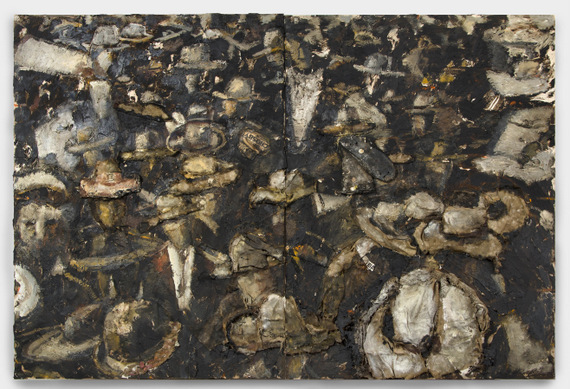