What was dental hygiene like during the Middle Ages in Western Europe?: originally appeared on Quora: The best answer to any question. Ask a question, get a great answer. Learn from experts and access insider knowledge. You can follow Quora on Twitter, Facebook, and Google+. 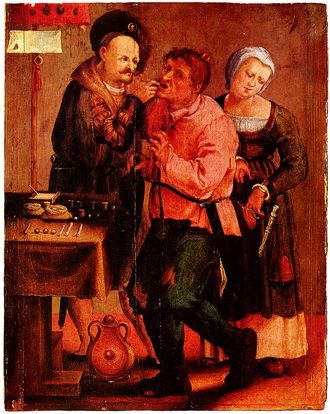 People in the Middle Ages considered healthy, white teeth a sign of beauty and wrote of sweet smelling breath as a desirable attribute. So, not surprisingly, we have extensive evidence that people liked to keep their teeth clean and a large amount of evidence of tooth pastes, powders and treatments, as well as mouth washes and treatments for halitosis.

Contrary to the depiction of medieval peasants with blackened and rotting teeth, the average person in the Middle Ages had teeth which were in very good condition. This is substantially due to one factor - the rarity of sugar in the diet. Most medieval people simply could not afford sugar and those who could used it sparingly - usually as a seasoning or minor ingredient and almost never as a condiment or the basis of a dish. This means that most people used natural sugars such as those in fruits and honey and even then ate this kind of sugar sparingly. Taken with a diet high in calcium via dairy foods, high in vegetables and cereals and low in foods that cause decay, the average medieval person ate the way most modern dentists would recommend for good teeth.

Not surprisingly, tooth decay was actually much less prevalent in the Middle Ages than it became in later centuries, when mass imports of sugar from the tropics made it a staple rather than a rarity. Surveys of archaeological data from the medieval period show that an average of only 20% of teeth show any sign of decay, as opposed to up to 90% in some early twentieth century populations. A more common dental issue for medieval people was not decay but wear. Eating stone-ground bread daily as part of almost every meal meant medieval people's teeth saw considerable abrasion from grit which, over years led to the teeth being worn down. To an extent this actually helped prevent decay, as their molars had less crevices in which plaque could accumulate. But in the long run it could lead to the complete abrasion of dentine and tooth loss.

Medieval people cleaned their teeth by rubbing them and their gums with a rough linen cloth. We have various recipes for pastes and powders that could be put on the cloth to help clean the teeth, to whiten them and to aid fresh breath. Sage ground with salt crystals was one popular mixture. Powdered charcoal from rosemary stems was another. A crushed paste of pepper, mint and rock salt was also used, and there were many more. Most consisted of an abrasive and a scented herb, though others included a range of spices such as cinnamon, mace and cloves.

Mouth washes tended to be wine or vinegar-based, with herbs and spices steeped in these acidic liquids. Again, mint features heavily in these recipes, along with marjoram and cinnamon. Chewing fennel seeds, parsley or cloves were the most common recommendations for bad breath.

The fact that dental hygiene was relatively good compared to later periods would have been a benefit to people at the time, given that dental surgery was pretty bad. Most treatment consisted of simply removing the tooth, which tended to be done by the local barber and with no anesthetic other than perhaps getting drunk before hand. More skilled surgeons had treatments for mouth cancer, involving the cutting out of affected tissue and then cauterization. We also have evidence of dentures made from cow bone or human teeth, though only for the very rich. On the whole though medieval dental hygiene was based on the same concerns as today - white teeth and fresh breath - and medieval people developed some reasonably effective ways of maintaining both.