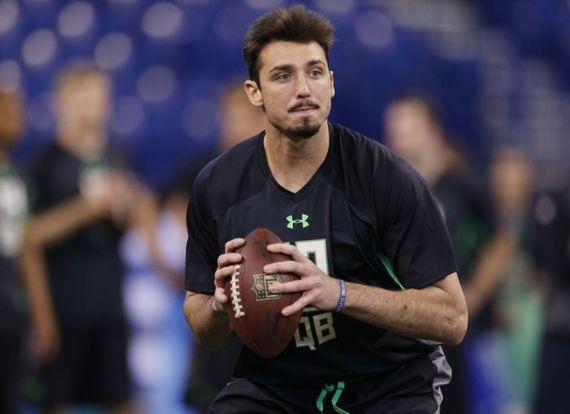 Two times the charm for John Elway for successfully drafting the man he wanted after starting way down towards the bottom of the NFL draft for the second year in a row, this time finding the talented man under center he needs in Paxton Lynch.

After dealing a third-round pick to the Eagles and his last place pick in the first-round to move up to 26th and get his man, Elway also accomplished another feat: beating the Cowboys to the punch. They wanted Lynch, too, but arrived too late to the trading party.

From 31st to 26th made all of the difference, after watching patiently as 25 other teams made their selections.

Blockbuster trades dominated this draft, a process that saw a rare selection of back to back first and second picks for quarterbacks after the Rams and Eagles traded nearly the world to get the top two selections.

With the selection of Lynch, it's easy to speculate that the Broncos are no longer interested in acquiring Colin Kaepernick from the 49ers, nor will they be entertaining a trade for Sam Bradford, either. The young Memphis quarterback comes with a strong, accurate arm and true pro potential, but is underrated by many.

After Peyton Manning retired and Brock Osweiler was wooed to the Texans during the offseason, fans were naturally worried about what the Broncos were going to do about their quarterback situation. A fast trade to the Eagles for journeyman backup Mark Sanchez was reassuring, but still did not resolve the long term quarterback situation in Denver.

"It was obviously the greatest feeling," Lynch said of being drafted. "This was a dream come true for me. The Denver Bronco organization is obviously one of the best in the league."

Last year, the Broncos choose Shane Ray after trading up to the 23rd pick. This year proved to be another fast move for Elway and company.

Lynch will join fellow QBs Mark Sanchez and Trevor Siemian on the roster this season to compete for the starting job.

As for Kaepernick's potential with the team, Elway was direct.

"We're going to continue to look at other quarterbacks. We'll stay open to everything. We're probably over with Kaepernick."

Experts say that it will take time to develop Lynch (as they do about nearly every quarterback drafted in the first round).

"I wouldn't say I'm a project. Every QB coming out of college has things they have to work on," he said.

The forthcoming preseason will be telling. But if Lynch is able to grasp the pro formula fast enough, he may just get to be the one calling who's taking snaps during the opening week of the regular season.